You have probably heard of this German nerfer "DrSnikkas" and the billet parts he makes for flywheel guns; particularly the CNC milled aluminum cage with canted-axis concave flywheels and a feed guide that has been all the hype. However what I have here is something different, a set of billet flywheels for standard Nerf-design cages. 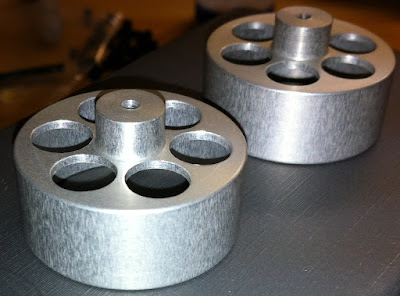 Thanks to Bobololo for providing these to be reviewed.

Readers of this blog who also follow r/Nerf (i.e. most of you, I assume) will already be aware of the performance-oriented blaster company which redditor farmcoffee is working on starting, and will have already seen this informal survey on whether people prefer blasters in a bullpup or conventional configuration.

This is a summary of the results of that informal survey.

Read more »
Posted by Herbert West at 7:52 PM No comments:

I have had some requests for improved and more complete circuit diagrams as of late. In this post I will cover some of the basic electromechanical Rapidstrike circuits and their applications, behaviors and issues, as well as some general Rapidstrike teching advice.

To begin with, we have the basic old school American Rapidstrike wiring as in my Standard Rapidstrike guide:

You will note I showed ground connections as per convention rather than snaking a bunch of wires all the way back to the battery and making a lot of clutter.

There is a LOT more to this post after the jump which is why I am breaking it here or at all.

Me and pistols have a long history of being at odds with one another.

I started out with, of all things you would expect to see me shooting, a Maverick - with my Raider or Vulcan primary. This was 2010, after all. My Maverick, in fact, did not suck. It had perhaps 70fps, and it didn't jam, and in those days it was quite nice. 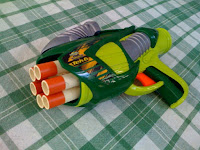 Soon after I moved on to exploring other pistol options of the era.

What I quickly realized, though, was that I was an ineffective player with a single action revolver. As with spring primaries, I found a major problem with ROF and the practical utility of a pistol in the sort of situation that would call for its use. This led me to a longstanding anti-sidearm, pro-secondary approach.

I would use various SMGs, carbines, PDWs, and abominations, trading off bulk and holsterability for the absolute level of firepower I considered necessary. 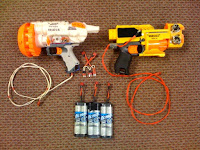 This ranged from a Barricade, to a Swarmpistol on a holster hook, to a Rayven tucked under my arm, to a RapidPistol with a 12 or 18 round mag, to what I planned to do with the Vulture bullpup carbine and never did.

Then around a year ago, around the time of UGA 2014, I came to a realization about the state of superstock rifle technology. It was the first HvZ game I played without having an underslung Swarmfire in years. I also played the latter half of it without my RapidPistol at my side, since I had given it to a squadmate with a down primary; and then everyone else either died or ragequit leaving me to represent us at the final stand, and in the process it ended up in the trunk of a car. I had nothing after my Tacmod except socks. It really was, "rifle first, rifle always" and you know what? It was great. The Tacmod proved itself capable of sufficient reliability and endurance that I needed no sidearm and didn't eventually die because of my equipment. 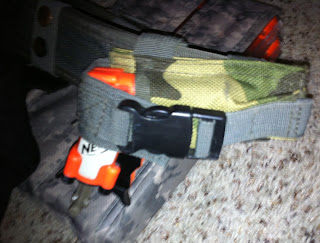 This resulted in my ditching the secondaries. My new pistol was a Jolt in a secure little holster on my belt, which remains there now. The automatic secondaries were unbeatably effective, but bulky. I could replace them with 4 more mags.

So that brings me to my present direction with sidearms. I wanted to get back some backup firepower for insurance purposes, but I wanted a sidearm - in a holster, out of the way, easily drawn. I considered all the usual superstock pistols and some unusual ones.

I immediately struck out the Nerf Strongarm. It is no secret I think the Strongarm is a poorly engineered gun. Aside from a stock spring AND an air restrictor, they frag, and there are no upgrade parts I don't trust to also shred. Less than 85 fps or necessity to run an AR is an automatic disqual in this race. Less than a hundred is already a demerit. 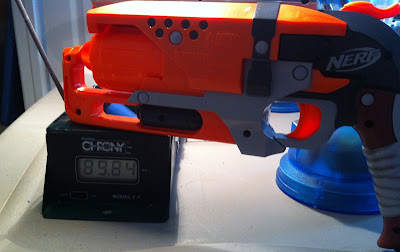 Next up is the Hammershot. This was what came closest to becoming my new pistol out of all the springers.

I swapped a Splatmaster Z90 for one of these, and upgraded it in about 5 minutes with a spring spacer and AR delete to decent results. Overall the Hammershot has a lot going for it - hammer-fired for one handed operation, reliable, durable, and the best trigger in the hobby.

And that is a problem everything above and everything else I looked at (including some promising Airzone/Lanard stuff) is facing. That is the paradigm I was initially so meh about - manual spring operation, constant among all classical superstock sidearms. If a Hammershot can help me, so can a Jolt or a sock; why carry 4 or 5 more shots that you won't have a chance to use in a bind?

Parallel to all this was holster research. The BSUK MkIV quickly got my attention, and... What's this about a Stryfe?

You know, a 130 motor setup, with a small lipo, exactly what I need - a nice slim semi-auto pistol. Malfunction, transition, pew pew pew pew, reholster and recover primary. Thinner than any nerf revolver, automatic, magfed, shoots 120fps like any other superstock gun. I think I might have a winner. 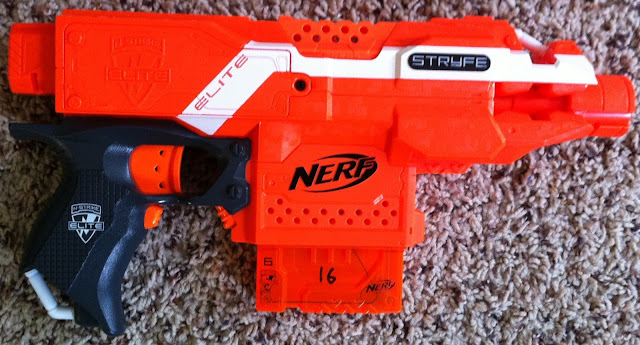 This is what I came up with. The blaze orange Stryfes are truly eye-stabbing and do not photograph well, but you should be able to see that some changes have been made. All accessory rails are gone and the underbarrel area streamlined for holster purposes. It will run Meishel 130 motors and a small 2S lipo. My plan is to snag a BSUK MkIV holster for it.

It has a name now: progress on the Chaotic shortbus

Remember this? Progress on this build has been slow as I've been doing bits here and there in my spare time, which I don't have much of at the moment. I've also been experimenting with different techniques, and on that front there has been enough progress to merit a post.

Read more »
Posted by Herbert West at 8:37 PM No comments:

Well, it has been a long time coming and a lot of hard work, but as of one week ago to this day, the newest member of the Tacmod family is finished. 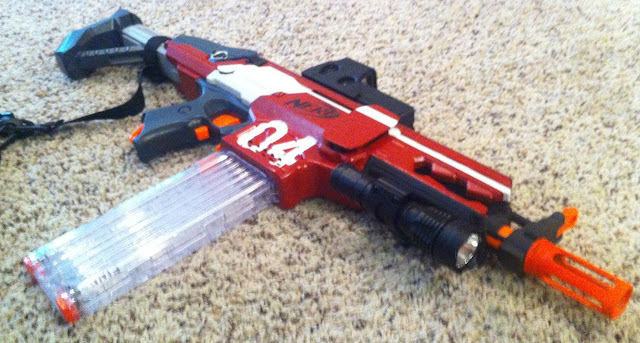