Some of you remember this project of mine: 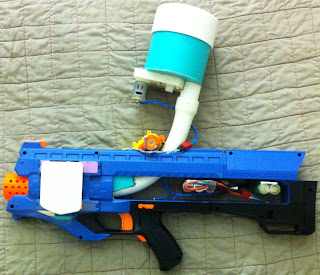 Oh man, where do I even begin... This was actively being developed about a year ago. I only recently happened across a cheap Zeus and bagged it and its cage, complete with flywheels and stock 360 motors, to replace the problematic parts in this from past experiments without spending much on it; and thus, I unfroze this thing.

At the time, Nerf Rival and its pioneering .90 caliber foamball format was very new, and the one question on everyone's mind involved hoppers and high-capacity bulk loading systems which the new spherical ammo begged for.

Airfeed, as popularized by outofdarts, Radiosilence187 and the "HIRricane" lineage, had not been invented/discovered yet. The focus was traditional paintball-style hoppers. Some prior art:
Nothing however existed which handled HIRs, supported reasonable ROF, and fed automatically without shaking. That is where I started, determined on whipping this problem real good. I wanted to break that barrier and make powered hoppers work. It didn't have to be ideal on the first go-round - it just had to work, and rip, and not jam; and the absolute nature of the last point cannot be overstated. I hit up the surplus vendor for some likely parts, grabbed my heat gun, dremel, PVC pile and Devcon, and got to it.

Recently there has been some buzz about Artifact's new superstock flywheel products and I have been super excited to see what's up with this low cost, high quality stuff. This was the first of the line to show up in a listing, so it was my first order to arrive.


I used BuyChina here and this was the timeframe:
Order placed July 5.
Shipped July 13.
Arrived July 25.

Fairly good, really. I recently placed another order which contains sets of all three models of Artifact flywheels and one of the canted axis (Super-E, the gold anodized one) cage to complete what I need to put the Artifact cage and flywheel products through their paces. 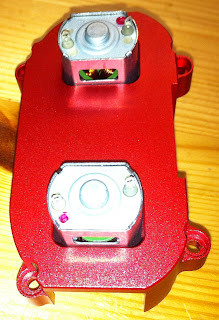 These cages are CNC machined aluminum, much like the DRS Performance product you probably know about. They are one-piece and mount motors with screws as with all other hobby market cages.

The two cages available now are superstock standard, and intended to fit all Stryfe/Rapidstrike cage applications.

Here I have installed a pair of Banshee-130. I didn't happen to use the motor screws that come with the cage, I had some on hand that came with XP180 motors. The stock ones may be too short for certain motor cans such as the MTB Hellcat. 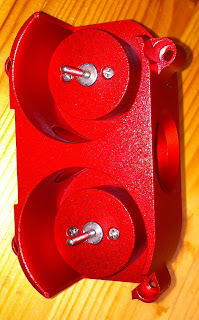 Test fitting in a Stryfe receiver.

One observation here is that the mounting bosses don't locate the cage with all that much precision, there is some play. Other cages fit the bosses like dowel pins and that sets the alignment. We will see what happens with that shortly. One positive of the clearance is that the cause of alignment issues is often the receiver being itself out of tolerance being that it's usually a crappy toy part. We can use that clearance to adjust and shim out problems. However, I am concerned about the potential to NEED shims or adjustment of every build even with a known good receiver and furthermore the potential for a drop or hard hit to knock the alignment out. 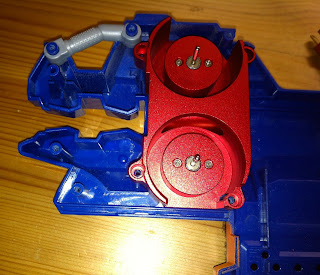 Inner barrel length required for these will be different (longer) from a Hasbro cage if you are switching from one of those. You will have to replace your old inner barrel with a new longer one. There is a counterbore about 1/8" deep at the front of the cage to locate the inner barrel. 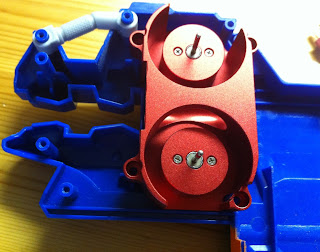 These parallel axis cages accept standard-design flywheels, such as common Hasbro cylindricals, Workers, BlasterParts, and Artifact's own. This is unlike the DRS Performance cages which use a different center distance and smaller pitch diameter deep-concave flywheels in order to fit the flywheel rims within the standard cage envelope.

However, the Super-E cages are reputed to not accept certain flywheels, notably Artifact's standard flywheels which are of a mild-concave design. This is likely just a clearance issue. Artifact has specific flywheels for that cage, which are one of those I have on order (they appear to be a more heavily truncated version of the same mild-concave design). Worker flywheels are said to fit both Artifact cage models. 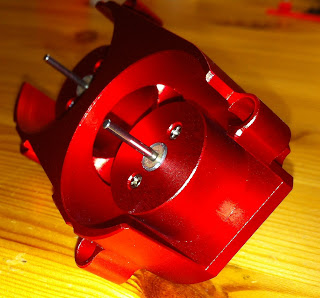 The inside surface of the mount sockets is around 0.5mm farther inward toward the access side versus a Hasbro cage. No caliper so I can't get at the mount socket depth or relative motor position, but I suspect the motor is pulled slightly farther inward here and this is likely why Artifact flywheels have zero hub protrusion on the inside unlike most other designs. A bit more clearance for the bearing housing there. 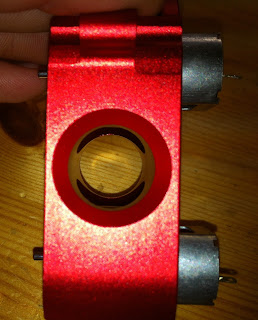 Now this is one of the more interesting bits of the design. The "red" cage, at least, takes a very laissez-faire approach to round control. That bore you see is the same diameter as an inner barrel! Even a Hasbro cage has tighter guide rails, although it does not present a parallel guide profile prior to and during flywheel contact, and this design does (much like other tubular guide systems and like my main Tacmod's prototype guide rail system).

We will see what happens with this concept when I test it, first with cylindrical flywheels and then with Artifact's concaves. Conventional wisdom is that the lack of round positioning will cause havoc with concave systems, but no flywheel profile like Artifact's has been extensively tested yet; the best parallel to them is the BlasterParts flywheel, which has unsatisfactory crush and doesn't make much velocity but otherwise is acceptable and consistent on Hasbro cages.

You can also see the feed ramp in here which is just a nice big chamfer. Simple, should do well enough.

A quick tech observation post: This -2460 was one of the pair driving the flywheels in our scout's pistol Stryfe during NvZ'16. It had previously given reliable service through several games. Coming into the final mission briefing, the user discovered a malfunction with a dart left between the flywheels, cleared it, and then found the dead motor. The Vulture in my backpack was promptly issued. 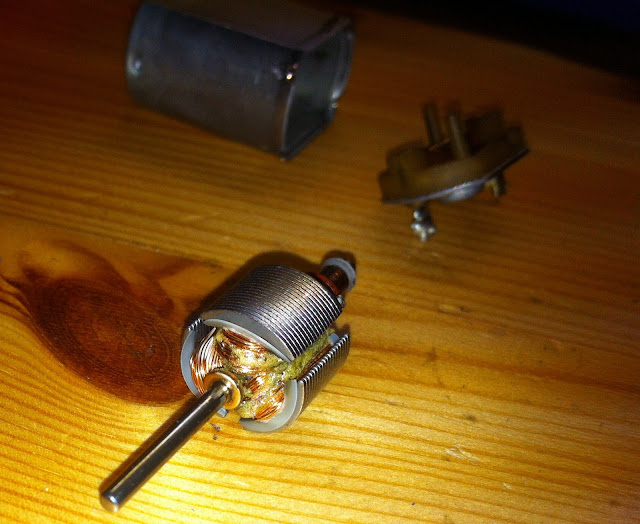 On gun teardown the offending motor was found to turn freely and smell of burnt magnet wire. The motor was then removed and disassembled and the cause was found to be a winding burnout as expected. You can see melted varnish on 2 poles. 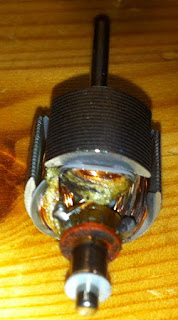 Commutator, brushes, and winding terminations were all intact and the windings had not structurally failed.

The battery at the time of failure was a 2S 1600mAh Monolith.

User was questioned as to what immediately preceded failure and noted that he had been running to a safezone and then noticed that his flywheels were locked up. I could not get a clear idea of how long the motor may have been stalled. It is possible that this is simply a sustained stall failure from a malfunction followed by accidental activation while running, but also possible that the only stall occurred when the problem was discovered and the failure had been ongoing up to that point.

Based on what happened here, the bright (clear varnish) color of the undamaged wire, and the failure mode (melting at what must be a low temperature from the lack of carbonization, compare to the appearance of other high quality motors' burnouts, example being the Mabuchi -3240) I have my suspicions that these cheap motors are wound with wire of insufficient insulation temperature class and are vulnerable to thermal damage from momentary stalls and/or sustained hard use.

I am planning to preemptively take these out of the remaining Tacmod in the squad that is equipped with them as soon as the chance presents itself to do so. Suspicions like that are not worth playing with.
Posted by torukmakto4 at 12:43 PM No comments: