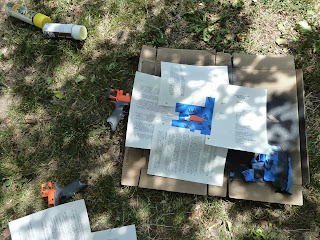 This is going to be a quick one.

Last weekend, I tried to apply some paint to the Demolisher shell pieces that you see in this picture. To make a long story short progress on the Chaotic Shortbus has stymied, partially because I wasn't happy with the way it was turning out aesthetically for reasons that I previously just couldn't quite put my finger on. This paint was intended to break up the large chunk of uninterrupted orange near the front of the blaster and help the whole thing to come together.

As you can see, blue painter's tape was used to ensure good solid lines around the painted area. The spray can ran out just as I started painting - and it's a good thing that it did, because when I removed the tape, I discovered that the primer that I was using had run under the tape and made a mess of the surrounding shell! There are no pictures of that, because I went to scrub the affected area with isopropyl alcohol as soon as I noticed the problem, but it really was quite a mess. I believe that this was due to the thickness and stiffness and relatively weak adhesive of blue painter's tape, which makes it unsuitable for fitting over rough surfaces (such as parts of the Demolisher's shell and crossing the edge of other pieces of tape).