I formally took the data on the Rapidstrike stuff I have done up to this point.

Without further ado, here is the data.

Details and observations after the jump.

Read more »
Posted by torukmakto4 at 3:54 PM No comments:


In addition to the expected stuff not worth mentioning (including what seemed to be a recently enhanced stock of Mega 20mm, due to the Centurion's ammo-mulching tendencies no doubt), there were a few standouts. 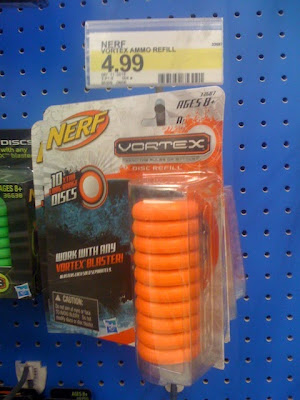 Read more »
Posted by torukmakto4 at 2:17 PM No comments:

Demonstration of operation at 900-1000RPM, 500RPM practical ROF, and ability to fire single rounds. Chrono'd at 100-110 in its current form, video description is out of date and my numbers were a bit premature and sketchy.

Yes, the details are STILL coming. I am going to explain exactly how to build these, so stay tuned, anyone who has kept reading me through the dropout in posts as of late. A lot has gone on with these rapidstrikes which has not been entirely solid and the best repository for this sort of play-by-play is still the forums.

The latest news, however, is that the Blade 180/pusher diodes/3s battery combo seen in this first attempt at the RS overhaul has been combat tested. I brought it out at a Thunderdome-type Humans vs. Zombies event, and it pumped out 500RPM 100fps all day long and didn't malfunction a single time.

That is the real breakthrough here.

Sure, we have had high-rate autos all along, and automatic rifles and 100fps autos for years - but never have all been combined until now, and never with such devastating, terrible, inexorable reliability. Mark my words, this is an ass kicker, a game changer and a quantum leap for HvZ and stock class nerf, and it is unlike anything the world has ever seen before. That video, with some crappy old darts, does not even do it justice. It's almost a bit unsettling having used it in an HvZ situation, like it's just too damn good. Too perfect for the good of the game.

Now if you'll excuse me, I have some zombies to stun.
Posted by torukmakto4 at 8:35 PM 3 comments:

Rapidstrike Test Mule. More to come on the flywheel front. 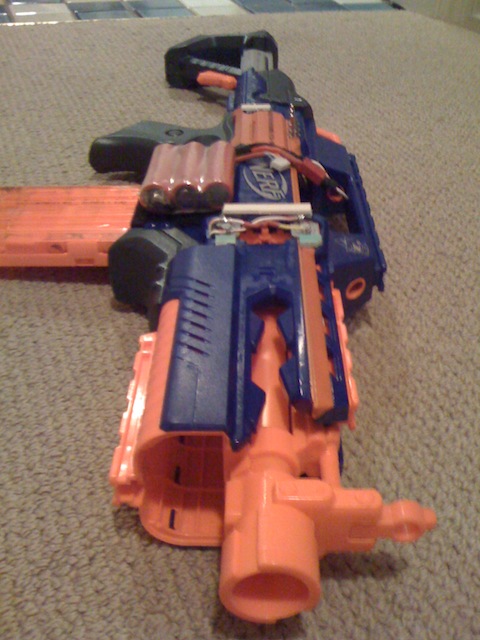 Once again, I have important things to post. Important things about flywheel motors, about Rapidstrikes. And not enough time and coherent thought to get them all together. If you have read me on the HvZ forums I have posted a lot of RS related stuff, stuff related to this gun above. Except it's not more than a stream of posts and observations and conversations among a bunch of modders. The problem with blogging this stuff is that it forces things to coalesce into an identifiable resource that someone can look at. Wait, that's the point. That's why I created DZ. Now I need to step up and get it done re: THIS.

So what's the ugly old thing up there? Long story short, a guinea pig for Rapidstrike mods.

It will eventually be cleaned up, and then it will be a real build - but for now, it still has wiring hanging out and temporary guarding of protruding motor endbells. And no integration or HvZ optimization. That will be fixed. And the info posted, along with a video showing some mag dumps which, I assure you, will remove any doubt about this system and its potential.