Now that the basic design principle of the Rivaloader is established and proven, I have moved on to the initial refinements.

First change was to increase the impeller speed, at this stage by sticking a faster 380 motor from an old blower on the same gearbox. That pepped it up a bit. Second was this: 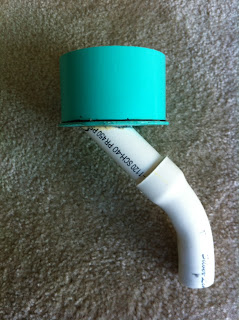 The angled feedneck is a preliminary shot at matching the exit path of balls more closely to the velocity they are being given in the raceway, reducing the tendency to bounce over the feedneck in the original. 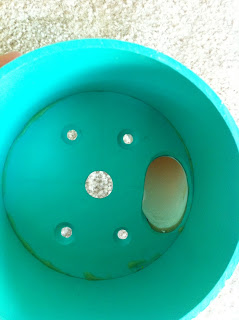 The setup with this tall prototype assembly ends up making my current vertical feed gun way too awkward for combat, so I shot the V1 with the faster motor installed at this past Sunday's game. However, there was a slight improvement with this configuration to what I would call "nearly acceptable". I am going to reach for more and more extreme versions of this design that make the feedneck intersect closer and closer to tangentially with the raceway.

What idea this sparked is that if the anti-jam (rollover tolerant) clearance is maintained at the tightest pinchpoint in the system, any raceway design can be used. So this may get away from a flat sheet baseplate in the next iteration and instead have a descending feed path starting at, say, 0.75" from the impeller blade underside and then spiralling down and off at a low angle.

Other major targets for improvement are the gearboxes (I found something taller ratio and stronger for the V2) and the impeller blade count and profile which is currently the original crude 2 blade unit. And of course it needs a nice gigantic hopper, once the engine is squared away. Multiple cases of red and white Cornucopia V2 and paintball pods for reloading are on the way.

Pre-game I fabbed up a lid for my hopper: 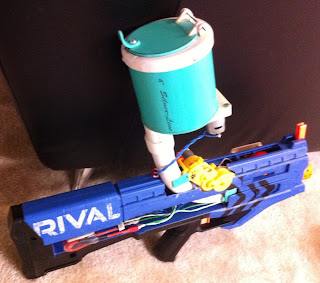 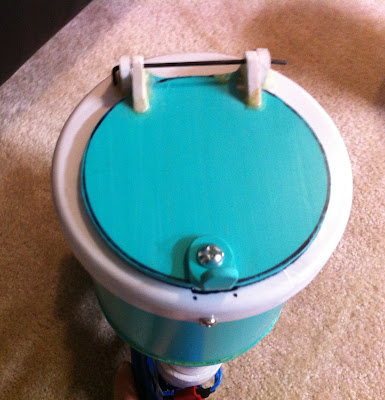 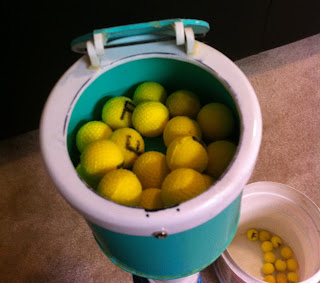 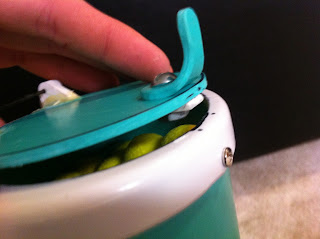 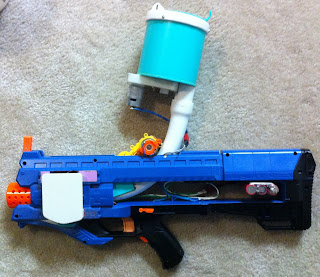 This is the configuration I used: V1 Rivaloader body and impeller with faster motor, 60 round hopper, new lid. Stock Zeus cage and motor set and same old powerfeed from before, and a 1300mAh 3S Monolith. Getting around 13rps in this form and nominal velocity. 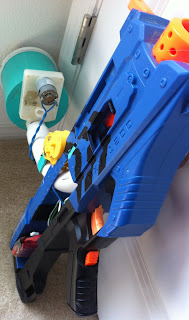 I won't bother with posting the shooting video of the setup because videos of shooting at nothing are boring. Instead, let's just see the combat footage, which leads me to my next subject. USF HvZ training mission footage is up on the youtube. Check out the playlist for the entire event, but here is most of the relevant shooty stuff in this one.


The development gun ran like clockwork and shredded zombies without a single issue. Outofdarts, I don't know why you are jamming, I still haven't had any malfunctions with this system. Well, aside from me shooting out my hopup... 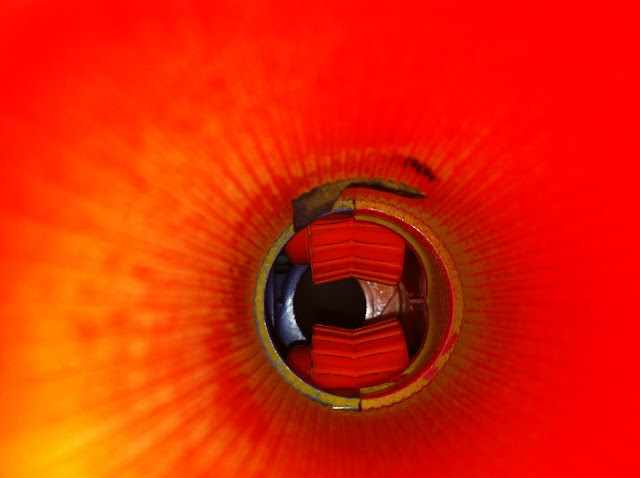 David Kaye saw that it was torn almost completely through at the game. I got home, railed on it with what was left in the hopper and the tip of the nub went flying out the barrel. Whoops! 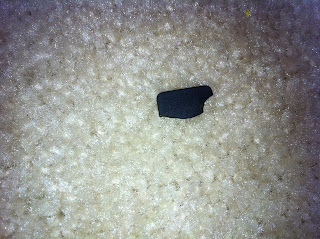 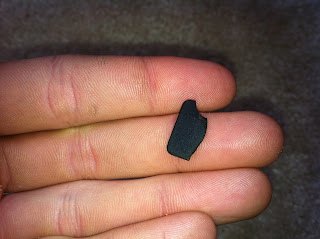 Classic fatigue failure, strange seeing it on rubber like that 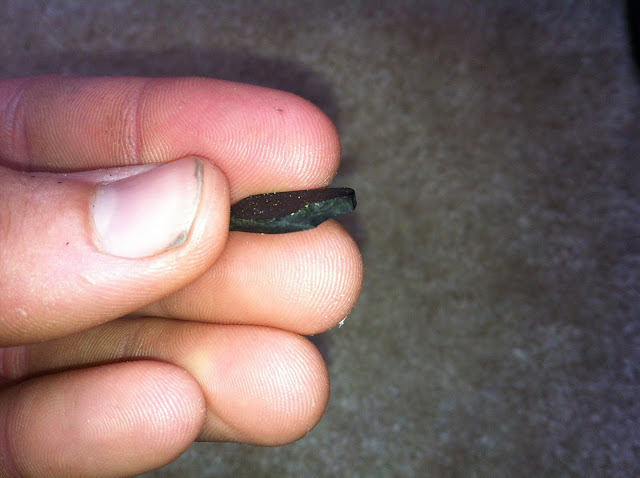 I may very well have had less range and accuracy that I should have from shooting through the broken nub all day. Oh well, I will slam a new inner barrel assembly in there today. I will use the old one to experiment with more durable aftermarket hop nubs because this may just be what happens when these things get run this hard and rack up so many rounds, this is a cheap part that comes in a fuckin toy after all. Fiber reinforced belting should do it, maybe a piece of a timing belt or flat belt. May also try making the hop adjustable.

Now, some observations about the HIR format.

So by now you have probably heard a ton of discussions about HIR. Sectional density, slow floating shots, dodgability, hopup dependence, being outranged by .50 cal opponents, plenty of noobs not understanding physics and thinking they can shoot them hundreds of feet at 400fps with a giant airgun, people who switch completely to them and extol their virtues, people who think they are crap...

Are they ballistically the most optimal or competitive projectile within superstock safety caps? Hell no. .50 cal just stomps the crap out of them in terms of retained velocity hands down and with modern .50 cal hardware shooting those darts, HIR is flat outclassed with nothing to be done short of a significant mass increase (which hinges on the manufacturers to tool up and produce it, and the process to be able to make usable ammo at a higher mass). There is no debating that. Accuracy has been a HIR selling point, but Gen3 koosh is comparable and hits a lot harder and faster at range.

Furthermore, the other major problem with HIR relates to the design of practical primaries for the practical player. The .90 caliber ball is a very awkward dimension and just does not lend itself to magazine feed. The original Hasbro single-column mags from the 2015 line did not provide the desired 15-20 round minimum capacity and yet were very long. I applaud Hasbro for tackling this problem and arriving at the multiple-feed 40 round Khaos magazine, but these are the size of a textbook, and as of right now, the mags are still not available aside from the single mag that comes with the gun. Hence, the Khaos is nearly a moot point pending the solution of this issue.

HIR does NOT get along with bolts/breeches of any kind. Frankly, HIR guns that are not flywheel are inherently troublesome and inferior, because they always need a way to seal off the breech. By contrast I have never had any kind of stoppage with my old Zeus configurations nor my current hopper loaded unit, and most field issues I see with flywheel HIR guns are stock Zeuses with the crappy, slow-ass semi-auto trigger group. Which has a very weird looking form of bolt, but it is still mechanically a bolt, regardless. No wonder! HIR is practically made for flywheel and continuous-motion feed. It is a strange situation really, and not one friendly to the "I don't like flywheel" crowd at all. It just reinforces the niche, however.

And finally, even at .90", they get lost. HIRs bounce like mad, roll once they land, and will find every hiding place and escape route.

Now for the redeeming qualities:

Extreme durability! Here are some Hasbro HIRs I have been using for testing since the early days: 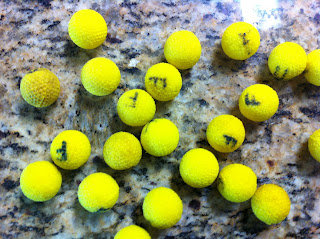 These have been shot many dozens of times, left out at fields and the yard at Site B and then found months later, stepped on and generally abused and ignored. 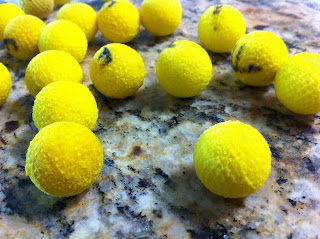 They show their history and some have serious surface wear, but they still feed fine and shoot great. The polyurethane foam is much more resilient than PE dart foam and due to both the material and the launcher design associated with ball ammo, there is MUCH less impact on performance as it wears and weathers than there is with PE foamed cylindrical darts. I lost track of how many times I have got into the subject of dart maintenance on reddit, but the gist of it is that for community groups and commercial fields that rent or otherwise supply .50 cal darts and/or gear, a concerted effort and constant expenditure is necessary to avoid giving players a terrible experience with crappy deteriorated ammo causing poor accuracy, inconsistency and malfunctions. This does not mean that .50 cal cannot be made to work, but in that type service, HIR and its durability and benign failure can be a huge benefit. While HIR cost is still around double that of a quality brand of .50 cal dart, HIRs in field/community pool use could last well over twice as long, and in sealed environments like indoor fields where ammo cannot escape, it makes a lot of sense. HIR is very carefree. Step on it, grab it from the ground and shoot it without worry.

HIR is great for bulk loaders, great for support and all-out OTT spam loadouts (compare to the gravity stickfeed Nitron and belt-fed .50 foam), great for abstract "sporting" hardware with no pretense of being the slightest bit milsim, and great for playing "sportlike" games. It is also inherently very safe and difficult to alter or cheat with, being that the entire projectile is made uniformly of one piece of molded foam. It will never replace .50 cal for me but I think it has a definite future. I am going to keep using it for sure.
Posted by torukmakto4 at 12:28 PM 1 comment: