Stryfe for scale. 20 round Vorpalmag loaded. 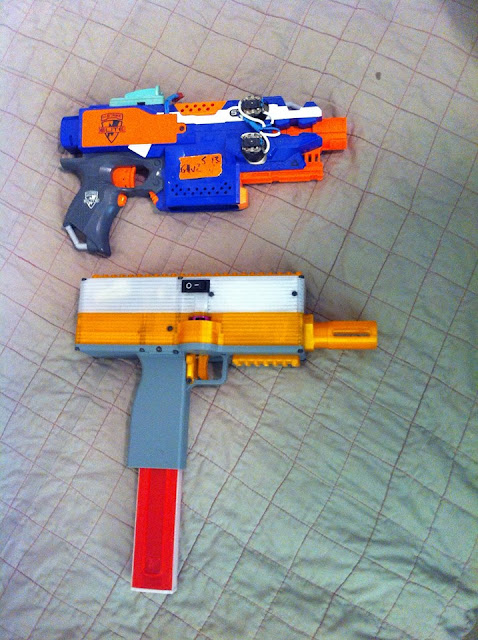 I always wanted a mag-in-grip SMG of my own ever since native short dart mags became a practical reality with standard formats and the advancement of desktop 3D printing.

Of course, mine would need a certain set of mandatory features and qualities:
So this is my first crack at it and my first "little side project" sort of blaster. 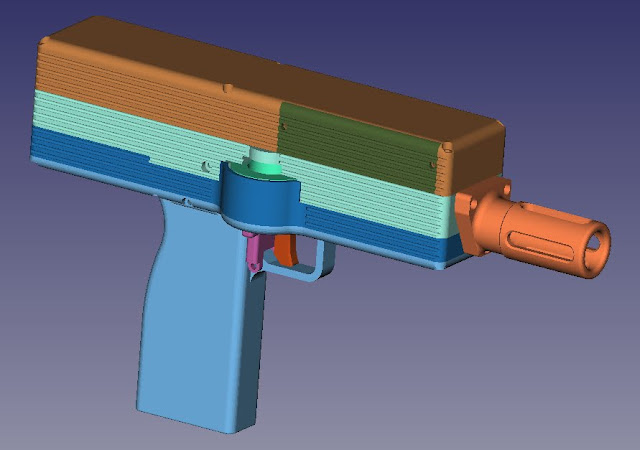 It's more or less a mini T19. It has a bare bones Core-compatible controller and drives the pusher with a hybrid stepper. The drivetrain is a scaled-down T19 drivetrain of 35mm stroke. The flywheel system is a scaled-down Hy-Con derivative which I am calling Mini-Con (not to be confused with the Dixon/Bregg Tiny-Con). 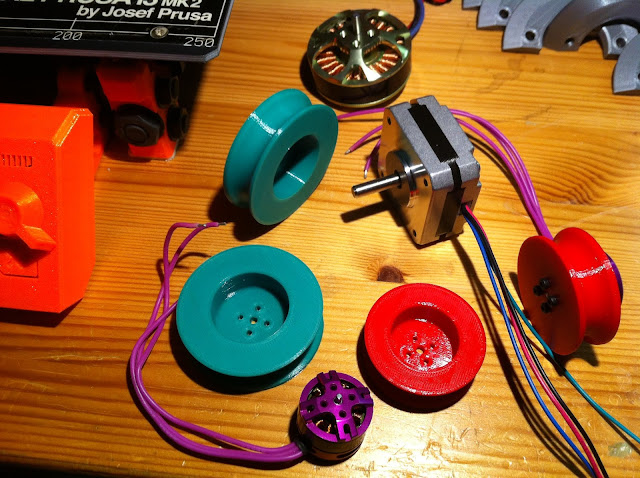 The red wheels are Mini-Con wheels and the teal wheels are full size Hy-Con for scale.

This system is 41mm centerdistance, and uses the DYS/Quanum BE1806 motor (purple motor at the bottom of the image). These initial wheels are 9.5mm "magic number" gap as usual. Shot down the barrel at the cage: 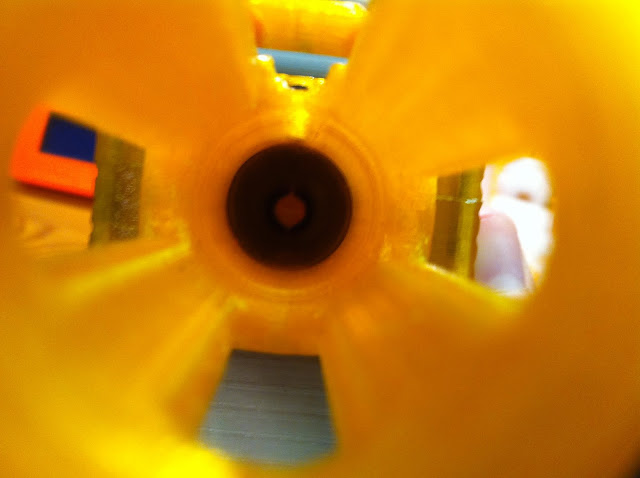 You can also see in the previous image a shockingly short NEMA 17 motor - this is a OSM 17HS08-1004S. Testing this motor was an objective of doing this project in the first place, and said evaluation is still ongoing. My initial impressions from running it in the prototype are that this little motor, even with the very well balanced 35mm stroke drivetrain in this blaster, is not a good choice for a bolt drive. It just doesn't have the guts, even when driven at up to twice the rated continuous phase current. Hybrid steppers are not a modern or high torque density design, as PM synchronous machines go, so it isn't unexpected.

For now, the one existing prototype is running an ordinary, full size 17HS16-2004S1, familiar to users of the T19 and direct drive FDL-2. This performs very solidly, of course. It will reliably cycle at ROF of 16+ rps that no short dart mag yet tested or devised will handle without skipping.

Here, have a cross-section: 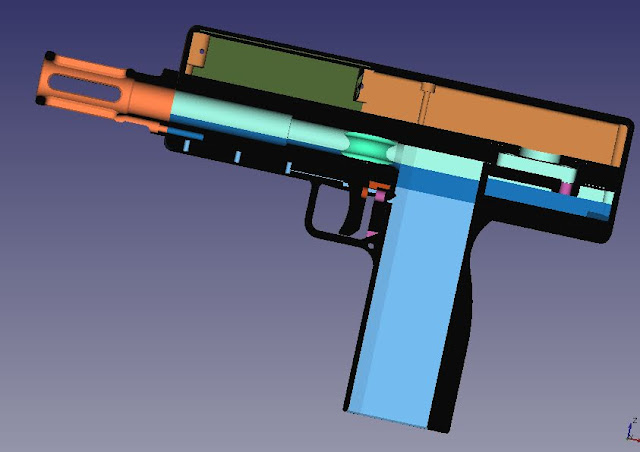 This should illustrate the construction and details of the layout. The entire receiver is composed of two parts that run the full length of the unit. The length was chosen as 249mm for reason of the Original Prusa i3 Mk2 and onward having a 250mm X-axis dimension of the build volume. Underneath this is a single-piece lower receiver. On top is a top cover, which forms the electronics compartment. 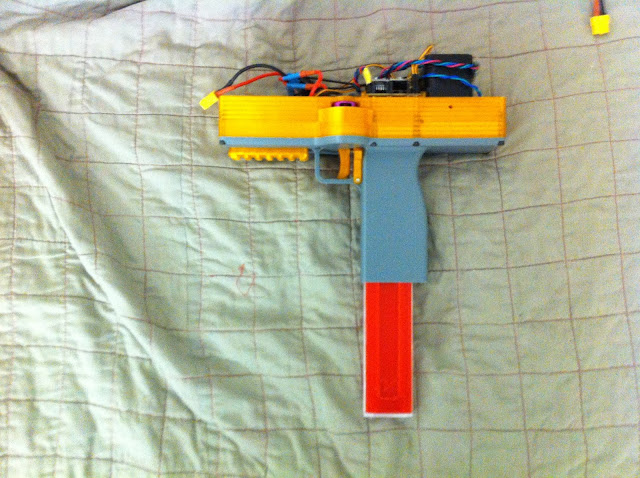 Flywheel motor controllers, however, are housed in cavities in the "main" and "cover" components beside the barrel in front of the flywheel system. 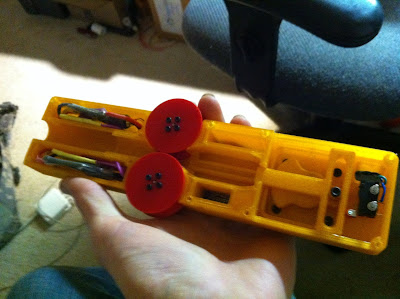 These controller cavities are sized generously to accommodate i.e. 20FS Afro or ZTW Spider 30, or similar higher-rated, older design non-minaturized units, despite the smaller motors in this application. Accommodating a variety of controllers was easy without an impact on external bulk since the need for placement of controllers somewhere was considered early on. 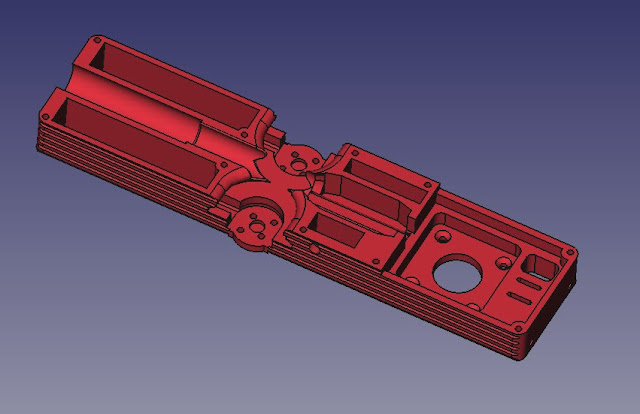 This is the "main" receiver component. The vast majority of critical geometry for flywheel system, breech and drivetrain went into this one part. You can see the phase wire ducts into the controller cavities. Also note the barrel. The 14mm control bore is kept normally short to save velocity. A fillet is provided at the step in the bore to prevent the printer from generating a corner swell burr on the crown and require manual crowning which would be a PITA down inside the bore of one of these things. This was successful.

Here's an earlier stage of progress, and this is a good image to point out the mag release design as well as the trigger switch. 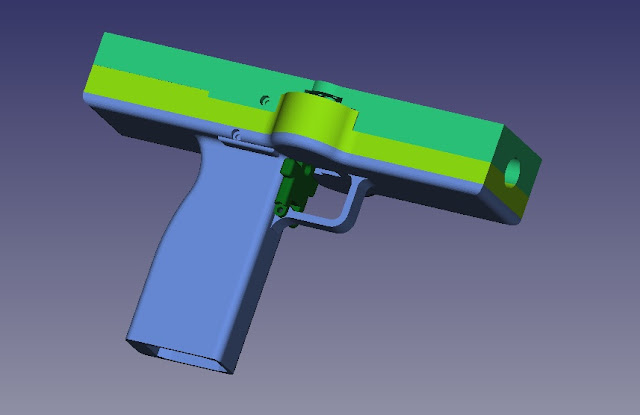 The mag release pivots about the lower end of the trigger guard and has ambidextrous thumb tabs that push forward to release. Has a similar feel to realsteel pistol mag releases. 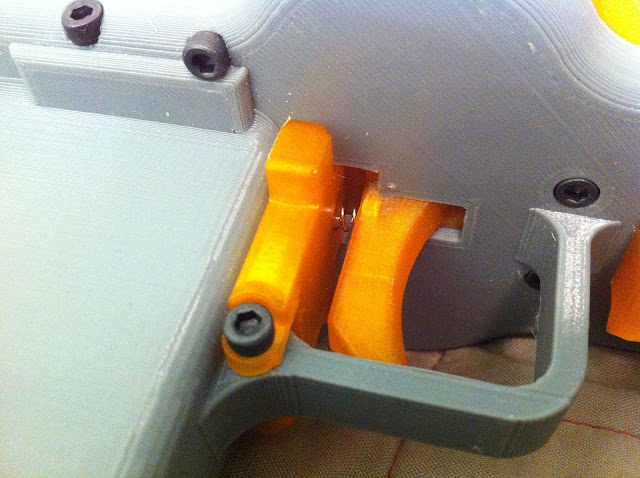 Tension is provided by a compression spring between the release and the back of the trigger, which also provides trigger return force.

You can see in the above images 2 counterbored bolt holes on the side of the receiver in a standard full-size microswitch pattern: these are for the trigger switch, housed in a cavity behind there and just above the slight bulge on the bottom of the lower, oriented vertically. The trigger has an extension which fits into a recessed channel in the top of the lower receiver and reaches back and to the side where the switch plunger is. 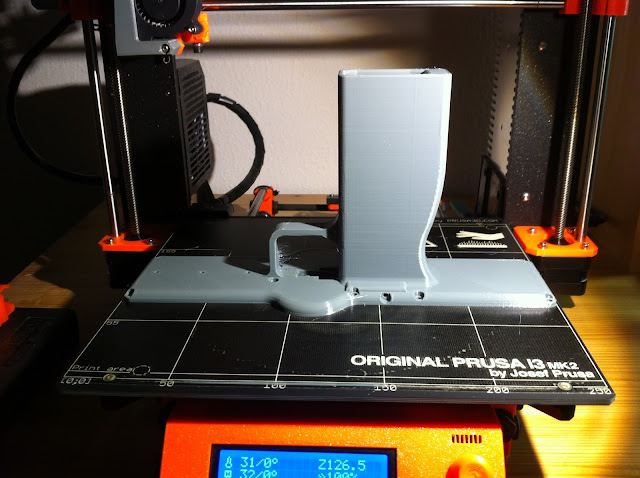 Bit of trivia: The lower prints upside down on the bed. The bottom of the trigger guard is bridged. No supports.

Back when I started on this, Katanamags were all the rage and the competing Worker Talon format was relatively untested. Katana format also lends itself to a more comfortable grip design, so I went with it.

... took my Katanamags in hand and ran straight off a cliff overlooking the Rubicon ...


What this references is that the ACS is rather tightly integrated. Supporting an alternate mag format would not be as simple as blowing a differently-shaped hole in some parts - that might break through or critically reduce wall thicknesses in multiple places owing to the body length of these formats differing with Katana being shorter. I would have move multiple, multiple features around to make it safe and proper, to the point that it may as well be a partial remodel - and if it's a heavy redraw, it makes no sense not to ALSO include many other lessons learned. So for the purposes of ACS-I, Katana is a done deal. 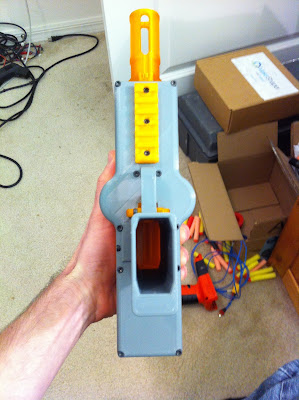 All I do know is that the actual OEM Jet Blasters Katanamags did not survive, I must have smashed them on something on the way downstream...

This may be the primary advantage of Talon format in the end - the OEM Talons are actually good mags. But when considering community-sourced designs, there isn't anything necessarily, inherently wrong with the Katana format. The distinctions and merits of printable mags tend to be format-independent. So to that end I have been printing Vorpalmags and working on assorted improvements to the Vorpalmag design, to decent success.

But what still stands out to me now that I have a fast full auto, short dart blaster is that even a mag which by all mechanical means ought to be a great feeding unit tends to be much more problematic with short darts and suffer a ton of tip sticks and stack tilting issues which lead to often skippy feeding. Dart foams simply don't resist the stack flexing/tipping as well when they are slightly less than half as long. It's the same elastic modulus of material but less than half the size. So it's squishier. Pretty inherent. This is probably the typical vexation I run into in the hobby which I tend to feel alone in; where numerous other people do or use something apparently without trouble judging by the posts and reactions, and then I try it out, am disappointed, and find that there is an inherent reliability problem in my book and it was all along that I have unusually high standards. 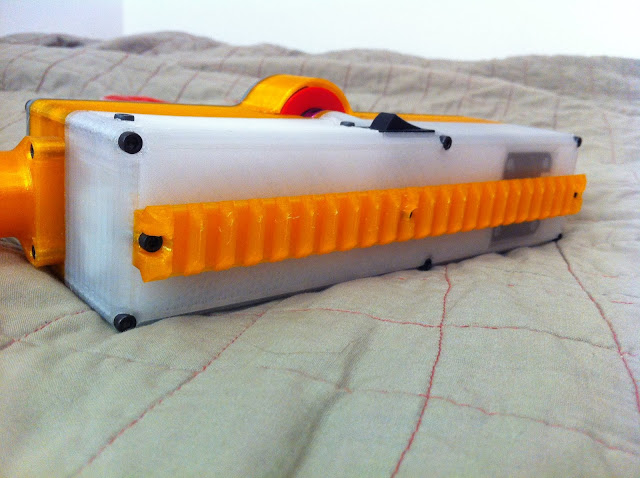 This was my first exploration of 3D printed Picatinny rails. These are sliced with 5 perimeters, 100% rectilinear infill and came out very nice, very sharp quality and robust enough. They feel about like nylon Magpul rails as far as material hardness, though with PETG's notch sensitivity issues at times they are probably not as strong as nylon would be in some impact scenarios. But they should do. 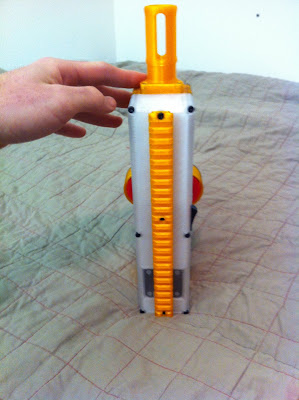 Top cover has a recess for the NEMA 17 bolt motor's endbell to reduce vertical height in the full size NEMA version. This area slices as only 3 layers thick, with 0.2mm clearance to the motor endbell to account for any extrusion texture on the top layer.

With this part being printed with Yoyi clear PETG, this area is quite transparent with barely visible extrusion lines. This might be useful at some point. Like, to environmentally seal something that has a display. I'm gonna have to keep that in mind. 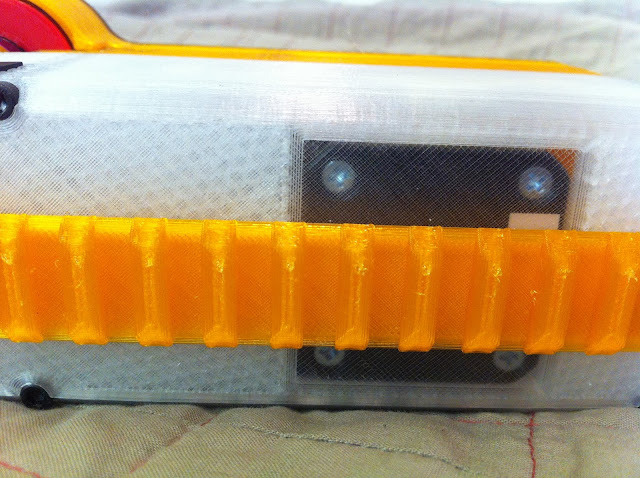 The underbarrel rail is there with the understanding that a foregrip likely be mounted there since this is not a conventional layout and there isn't anything for the support hand to grab without mounting something for the purpose, so a hopefully sufficient number of bolts are used here. 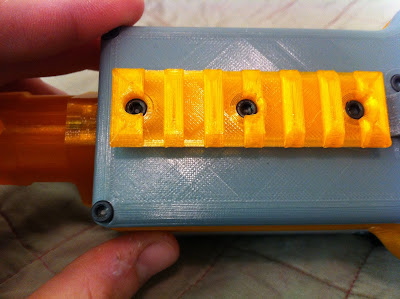 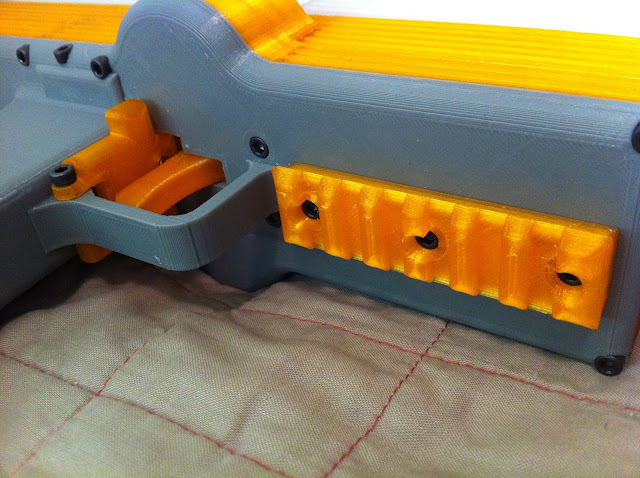 Some factors I am unsatisfied with:
ACS-II will be substantially and fundamentally different. It's pretty vaporous how right now, though. 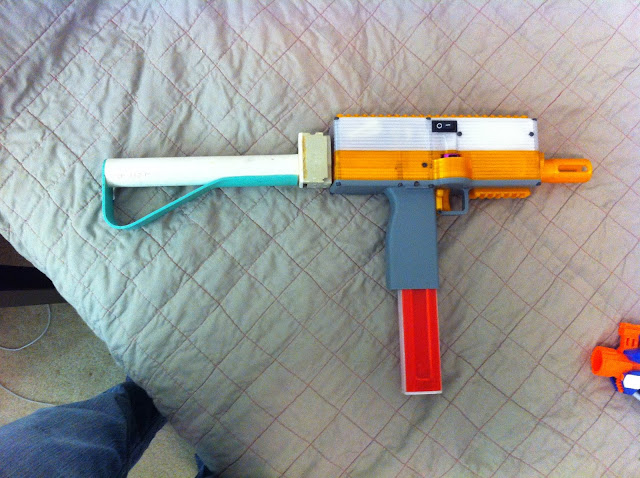 Here's a mockup with a stock that shows where this is headed once I get around to designing and printing the retractable stock for it.

In the end, despite my misgivings about this little detour not being the best a SMG can be, I think I got somewhere with ACS-I. Smaller than a MHP by a LOT, no clamshells, no DC, no plastic gearboxes, no ridiculously fragile parts, and no other jank, really. It's a solid, clockwork little thing when the mags cooperate. Combat test to follow.
Posted by torukmakto4 at 12:53 PM 1 comment: