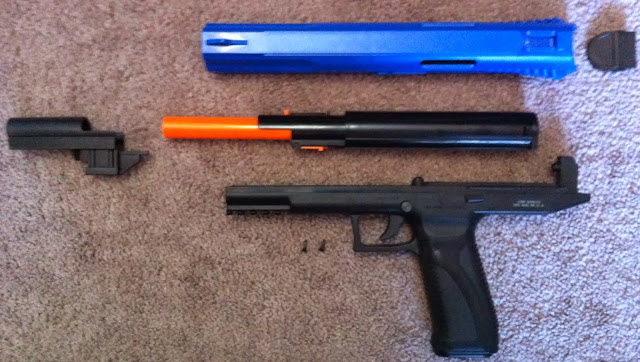 Previously I covered the Z90 from a nerf perspective. This is the other pistol in the JT Splatmaster line of spring-powered nerf-like paintball guns, one which probably attracts more interest on first glance from nerfers than the Z90. Why? Well, this. 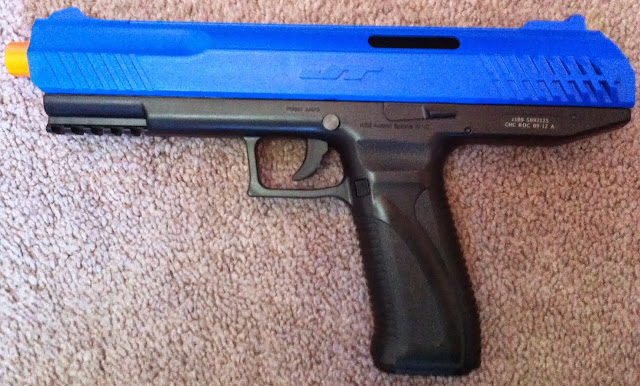 Damn. We already know the aesthetics and general format of the gun are a win.


Like the Z90, this is a springer with a nice long .50 caliber barrel already on it and ready to go for nerf use. And like the Z90, darts get muzzle-loaded. Barrel bore is near identical to the Z90 barrel and seems to be the correct fit for these to shoot darts very well.

Once again, these guns are not massive air movers, and dead volume kills their performance badly. The stock barrel is too long to muzzle-load without a ramrod, so to get the optimal 130fps with elites, you need a ramrod. However, that is a solid 130fps with elites, beating out the Z90.

Something I noticed, the Z100 is a bit more refined than the Z90 when it comes to (to borrow automotive terms) noise, vibration and harshness. The Z90 is quite loud and has a "sharp" nerve-rattling feel; the Z100 is quieter and "softer" and in general feels like it's shooting less velocity than it actually is. I didn't believe it outperformed the Zed 90 until I chrono'd it! That in my book is a win for the 100. 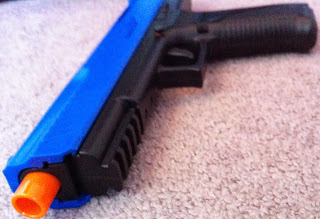 Unlike the Z90, this is mag-fed (unfortunately not in the case of darts, though), has a quite realistic slide rather than a T-handle for priming, and is overall quite a bit more tactical. Perhaps tacticool, but that has a negative connotation and this is just a very nice piece of gear.


Let's give it some scale, though. 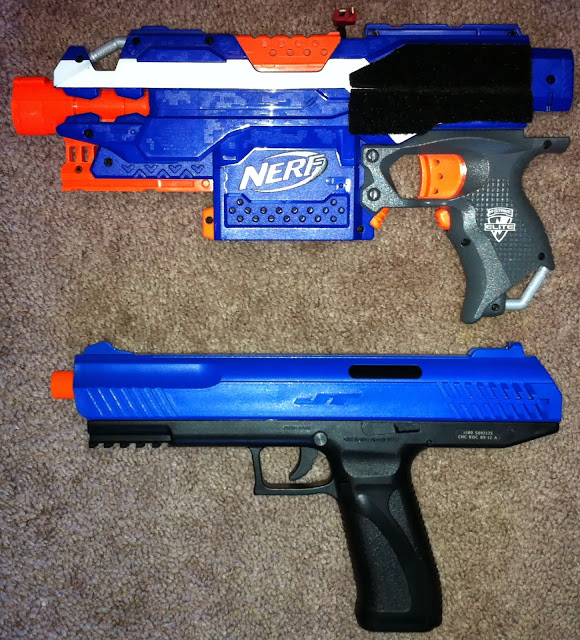 If you were thinking this was stowable... nope. 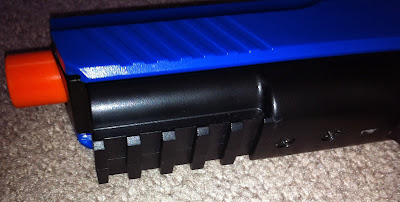 Nerf, please take note. That rail on the frame is a standard Picatinny rail. If these guys can choose to use standards in the design of their $20 plastic nerfy pistol rather than being backwards dumbasses who invent their own proprietary, closed, and more than anything, shitty and flawed version of a common device like an accessory rail for absolutely no good reason, so can you.

+1 JT Splatmaster, that rail is a nice touch. If I want to put a light on this, I could buy one and drop it right on and it would lock up solid and perfectly straight. If you are one of those who takes this for granted, you have never nerfed. 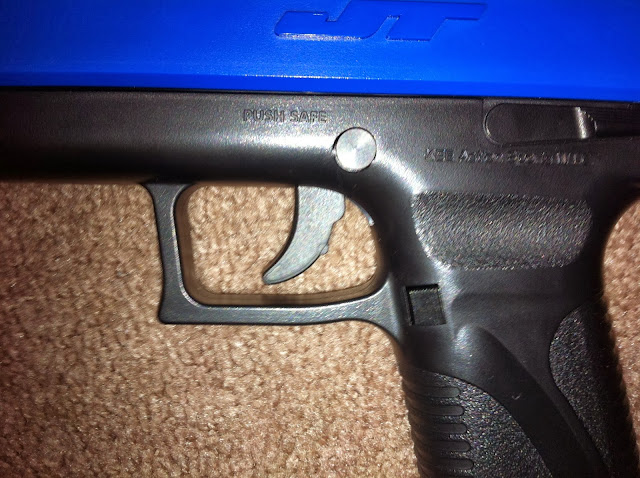 The trigger is very nice both externally and mechanically. 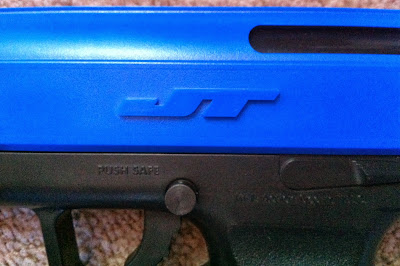 Molded-in JT logo on slide is... very raised... and very sharp. You could almost cut yourself on that. 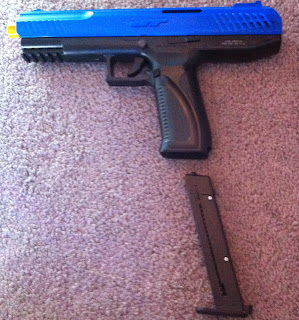 Magazine. Capacity 7 rounds (spherical ammo only, unfortunately for us). I am looking into converting this gun and mag to feed and chamber a super-short stefan, since my attempts to find a suitable "nerflike" reusable ball failed. 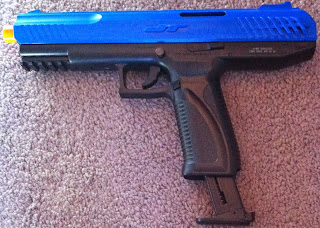 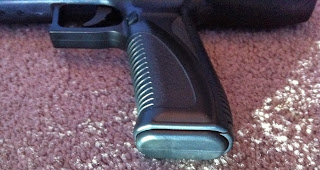 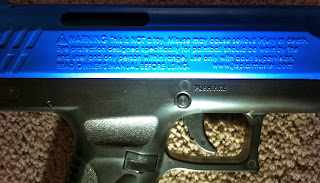 Check this out. I guess they take their 130fps very seriously.

On that thought... This is what Hasbro's standard warning/disclaimer would resemble if their guns also performed like stock-class mods out of the box, like this one. Death. To HvZ zombies, I guess.

Sad world we live in. If nerf guns had been introduced in the 1960s... imagine all the variety of wonderful things would have come from the factory, no modding required to perform like beasts. 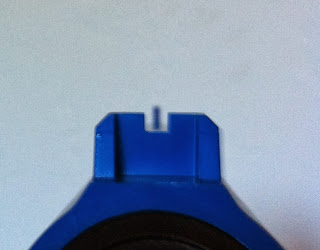 Best I could do for a sight picture image. Functional, if plain, sights.

On that subject of sights, the Z100 seems very inherently accurate. The solid ergonomic grip helps, the weight (which is substantial) helps, and the trigger is wonderful. Most nerf triggers feel more like industrial equipment controls than marksmanship. This is not one of those. Light for a nerf gun and clean break.

Recoil problems often afflict high-powered, compact spring pistols like Nitefinders. The recoil of a spring-piston airgun occurs before the shot leaves the barrel, and many NF have a learning curve to not shoot way high. Once again, the Z100 is a massive improvement. For the velocity it is shooting, it stays on target very well. 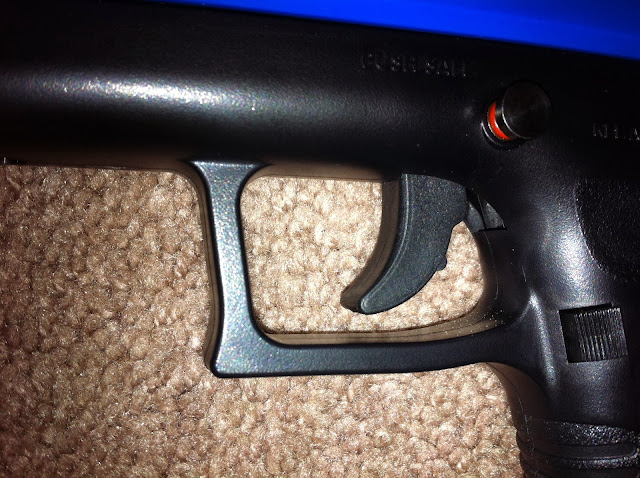 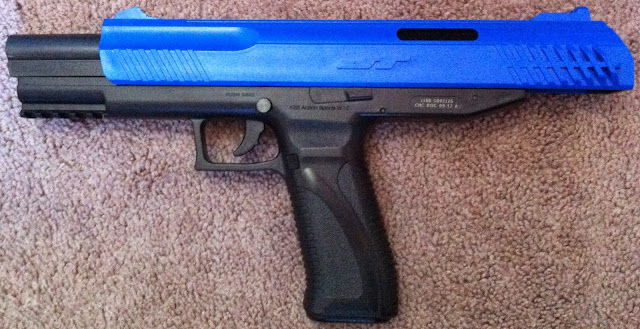 Slide racked back. There is no return spring.

Also note that the barrel has vanished inside the frame! What's with that? 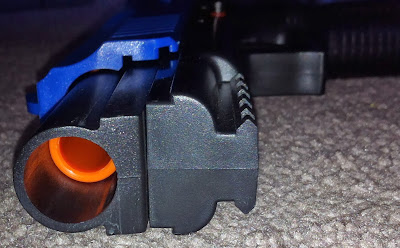 The barrel reciprocates in a manner vaguely similar to the recoil-operated action of a real steel semi-auto pistol. The "why" will come later when this thing is broken down. 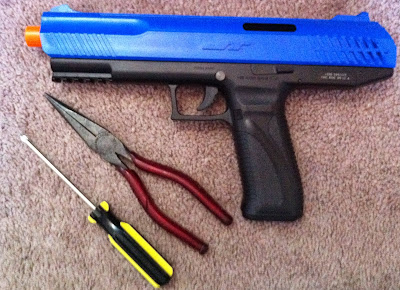 And speaking of that. You didn't think I was going to leave a gun this unique undocumented and unexplored, did ya? 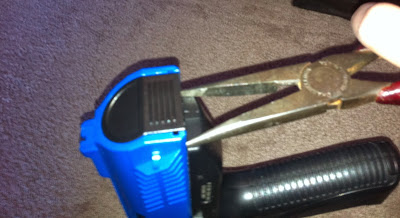 So here's where things get weird. Externally, there are none of the screws in counterbored holes that nerfers expect to find - the Z100 is not clamshell construction. The slide is one-piece, and so is the frame.

The first step in stripping this thing is to pop out the rear endcap on the slide. To do that you need to expand the slide slightly. Needlenose are a good makeshift tool. 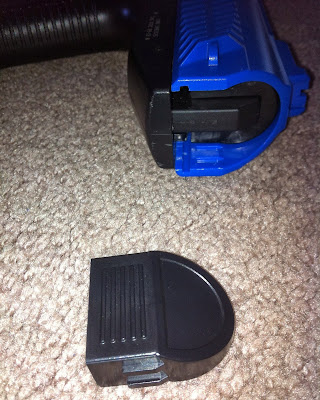 Done. That endcap clips in place solidly. No fasteners, no problem. That will be a common theme here with exactly 2 exceptions. 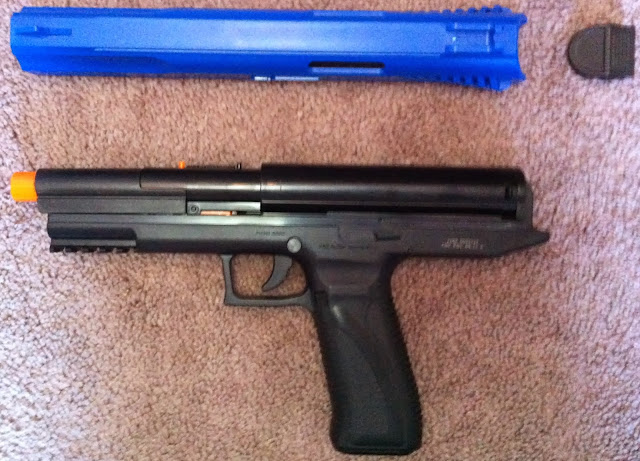 The slide is then slid off the frame toward the front, revealing more of what looks like black magic or alien engineering, but is really quite simple.

2 countersunk flathead screws in the underside of the frame retain the barrel bushing. Remove those now. 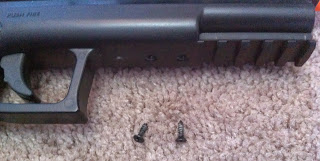 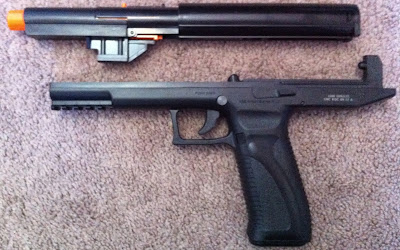 The upper assembly then lifts out of the frame and the barrel bushing slides off.

The hook on the rear of the frame engages the spring rest and carries the load from the spring. It's not breaking, trust me.

Great, now let's take a closer look at that upper. The elephant in the room is that giant cylinder, which might appear to be the size of a NF Rifle PT... but the stroke is only about 2 inches on this. Here's looking at the bottom of the assembly through the slot where the spring hook rides and the sear catches the piston. From front (left) to back (right) you can see firstly the guide lug and sear engagement area of the piston (once again very airsoftish, shell-type, with the spring sitting inside; not like a nerf plunger); second, the spring; and third, the spring rest, which has a spring guide integral with it. The spring rest does travel within the whole assembly.

The slide engages the front of the cylinder via a very thick bulkhead and pulls the entire upper to the rear on priming. Once fully retracted, the sear engages the piston and holds it back (the spring force now acting between that rear hook and the sear, and on no part of the upper), and the cylinder and slide are free to return forward.

The barrel is pinned to the upper and has limited travel, about 3/4".

There is a small extension spring on the barrel. This loads the barrel rearwards at all times. 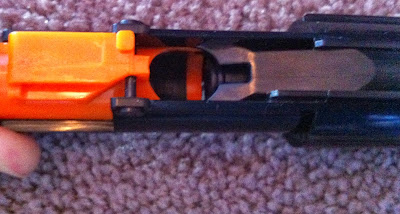 Stock breech, for paintballs. The ramp on the cylinder will be explained when I get to why the barrel travels. For now, note that there is a bolt with an O-ring on it, and a rubber "chamber liner". Very well sealed system.

Well, I totally failed at getting a ruler shot. Massive parallax error. 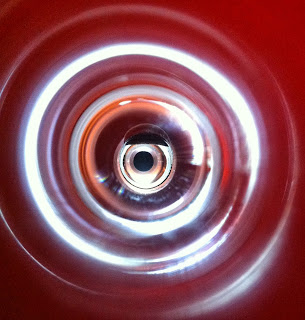 Shot I took down the bore with a flashlight stuck in the breech. Note the rubber liner has a nub protruding on the top of the bore. That's a hop-up! When firing spherical ammo, that induces backspin on the projectile which causes it to generate lift, producing a flatter trajectory and greater effective and maximum range. I did shoot some lazerballs out of my Z90 and they definitely shot strangely flat and seemed "lofty". Vortexish and uncanny, by my dart-oriented standards. Nevertheless cool. If you are into the alternative-ammo stuff and are actually going to shoot paint out of these rather than darts, it's useful. 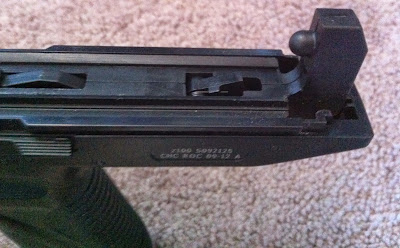 The Z100 doesn't have either a gate catch nor a Buzzbee-style hook type - it's a true-blue sear, just like in firearms and other stuff that catches and holds back forces. 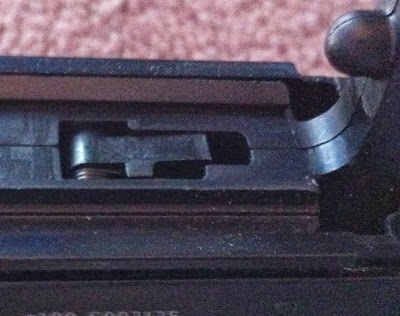 Breech lock is operated by the piston pushing down the ramp, unlocking the slide after each shot. Same principle as any Nerf springer. 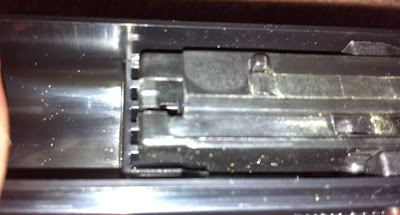 The tiny nub above and to the right of center is depressed by a ramp on the slide when the breech is closed; otherwise the sear is disabled. Similar to a Nerf trigger lock. 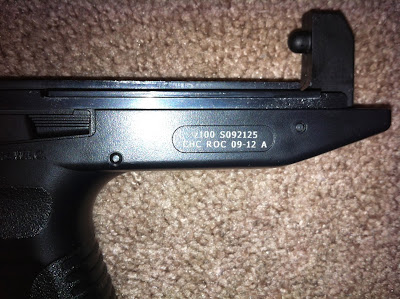 The fire control group is pinned into the frame in these two locations. I didn't bother pulling the pins out.

Now... what's with the traveling barrel and the ramp on the upper?

The barrel travels because this gun takes a very ingenious approach to getting the magazine in a more favorable location for a pistol. Note where the bolt/breech area of the upper is when the action is closed. Not in the right place to feed ammo. So, the barrel travels to the rear with the upper until it is stopped by the frame, the breech is opened and a round fed. Then, the barrel travels forward and is clamped between the frame and the upper when the breech lock engages, preventing any bounce or leakage from the breech.

The front of the cylinder actually overhangs the mag by quite some distance when closed. Thus, the ramp, which is to allow the larger diameter of the cylinder to ride over the mag by allowing overfeeding on each shot and then forcing the rounds back down into the mag. Since the mag has no feed lips, only a detent which is released by the frame, this works. (But not with unmodded lazerballs!) 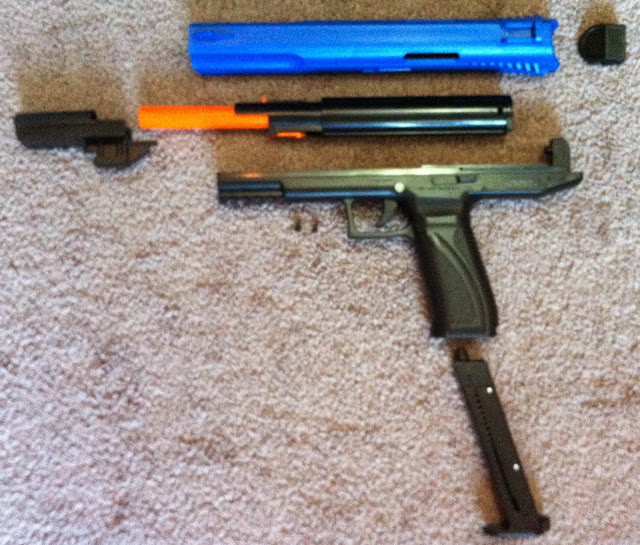 That completes the teardown.

It's super easy to take down and put back together compared to Nerf products. A few minutes tops. And only two screws. For most of the functionality of a Retaliator in stock form, I am impressed with how low the parts count is.

Furthermore, I am SERIOUSLY impressed with the quality of these products. Most parts are ABS and glass filled nylon but are VERY, VERY beefy. Overall, the gun feels like a solid reliable product of a sort that no stock Nerf brand product has ever been. And the design work, flawless. Rather than a brute-force, "throw more parts at the problem" approach with a lot of wasted material, wasted effort and wasted space, this thing is simple and beautiful. More than anything, seeing this line of products makes me a bit sick of Hasbro's bullshit as of late, since we are paying similar prices to what these go for and what we are getting are guns inferior in design, workmanship, materials, fit and finish to these. JT has shown the world that quality is possible on the mass market and more or less shot Hasbro's arguments of high ABS prices and the like all full of holes. Can anyone say "profit margins"?

Anyway, rant aside. The Z100 rocks. Only really a single shot to us and it's not very relevant to HvZ, but great out of box performance, competitive with Firestrikes and the like in stock class without any modding, very good product, very nice shooter. I would call these a buy. If you see one, grab it.
Posted by torukmakto4 at 9:04 PM