Lakeland TRU: Nerf "Super Soaker" squirt guns. No, seriously. Fancier, beefier dimestore water guns. Zipfire - has this been spotted yet? Does anyone care? 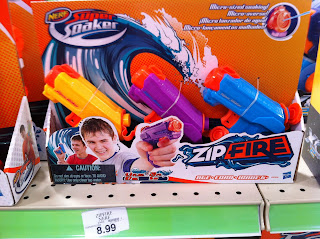 Circa 2010-2013 Nerfsoakers are now getting knocked off. Well doesn't THAT look familiar. 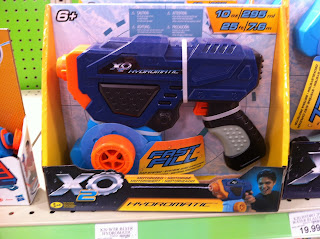 And a Modulus unceremoniously thrown on the floor with a Sonic Fire Strongarm and a NOS pack of XLR ammo. I didn't do it... 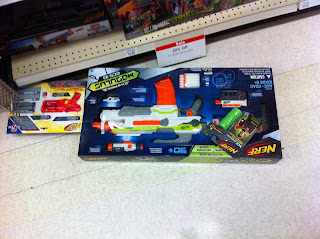 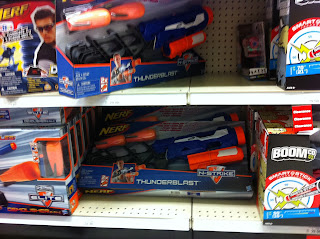 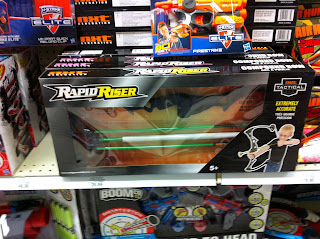 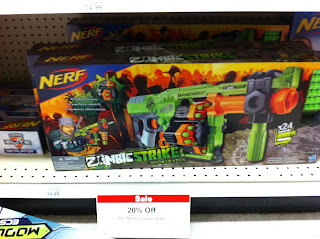 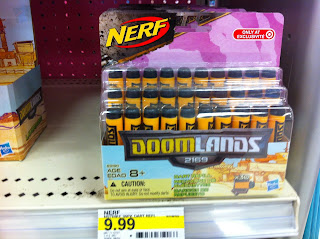 Lawbringer. Another meh pseudoprimary. Nice solid trigger - the hammer-fired revolvers have the nicest triggers in the industry. This one's heavier than the Hammershot but still not a gummy crunchy mess like the average nerf trigger. Looks like a lot of fun for a LOL cannon for quick HvZ rounds or something. 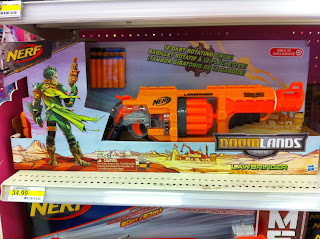 Rotofury, which I think was a valiant effort and awesome for being the exact concept that was fan-arted and April Fooled by SBNC, but is a pass in favor of Buzzbee products!

With Buzzbee you not only have no gears, but 12-round reliably feeding quick reloading tactical ergonomic field sweeping position storming magfed awesomeness and a whole lot of mod potential in both the Tyrant and the Boss to be everything the Rotofury could ever hope to be and then some. You screwed yourself Hasbro, you dun goofed big time.

This should have been Mega's Alpha Trooper. There's still time to reverse yourself and make some really good magfed mega stuff now that the little underdog just smoked you out of nowhere. What's your comeback gonna be, Hasbro?

And don't forget the stock, or stock mount, next time! 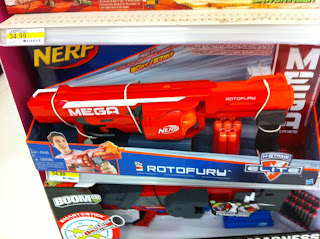 The Doominatah yet again. HvZ players, please do not buy this gun. It is not a primary. If you must, buy a Modulus, it's ugly and overpriced but at least it's a Stryfe. 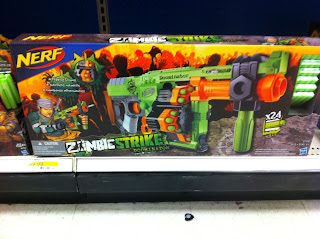 Now here's where the fluff products and the gimmick bashing tapers off. Wal-Mart 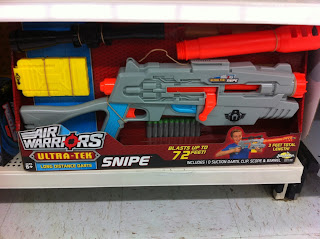 The Buzzbee Snipe. I like this thing, and kind of want one. Solid feeling realistic turnbolt action. It's the first thing I have seen in superstock that does that properly.

Someone's gonna have a problem with it not being a Rangemaster. I'm not sure why, there are better airguns, and in its stock shell the RM is meh. Better it be a springer that takes mags, that way this same slot in the line can go from gimmick to something on the level of a Slingfire.

Next USDs on clearance. Are these being killed? Wouldn't be surprised, I think they flopped. 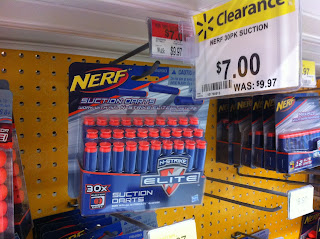 Thankfully, Buzzbee has put out their near-clone dart offerings.


And now what people were waiting for... 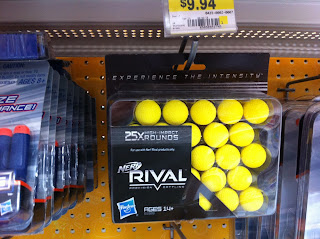 No guns, no 50 round packs, no mag packs, no masks - just 25 packs of balls. Bit of a rocky logistical situation with the Rival launch huh.

When I was snagging my Rival ammo, a mom and a kid went by. He saw the Rival ammo and was all excited. "Oooooh! Rival's out! Here look, they shoot, like, foam balls..."

Me "Yeah I got a Zeus. Already modded it too. They might not be on the shelves but they are probably in stock at Target."

At this point the mom was super attentive...

"If they are not on the shelves, they probably have them in the back. This target around here might not have Zeus, but I know they have Apollos. Look up the DPCIs for them and ask them to check in the back".

Cool. Hopefully this kid gets some Rival gear out of that. You know how I feel about kids getting into the hobby, but that kid knowing about Rival just took all the "get off my lawn" right out of me.

And as a bonus, not related to shelf watching at all, is a rare time I agree with Coop:

Was in response to a troll thread. Maybe if the big name youtubers are involved and are in support of proper terminology and stomping on the Hasbro for god campaigners and "clipazine" nutcases, we will finally see people act a bit more rational about the whole thing and realize how pointless it was.
Posted by torukmakto4 at 7:49 PM