Literally a hour before the TBNC match where the Model Pandora, and by extension the T19 running gear and the Hy-Con flywheel system, got its trial by fire... here I was cracking her open and pulling the processor card for a quick reflash. So that gave me an opportunity to get an image of what is inside the brick-like confines of the lower drive housing. 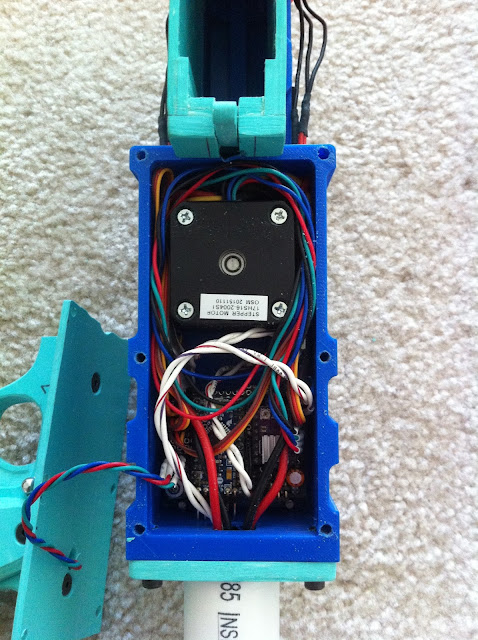 Of course lots of wiring, and of course you can see the end of the bolt motor. Less obvious is the controller board, mounted on some PVC standoffs (that will be part of the drive housing model as soon as the board is standardized). You can see the heatsink and distinctive purple PCB of the DRV8825 driver card for the bolt motor. Just to the left of that is the processor card, an Arduino Pro Mini which is my new favorite micro board (highly recommend). What you can't see under the wiring are the flywheel motor controllers, stuffed partially in between the stepper and the housing. The phase wires cross over from the left drive to the right motor and vice versa in front of the bolt motor with all those 2mm bullet connectors and no slack. A weirdo configuration. What a pain in the ass to deal with, and incredibly dependent on using the same Afro 20A controller to even fit.

Where these controllers are going to go in Production T19 is getting massively revisited, including accommodation for larger ones that might be required for certain configurations in the future. I never did like the "wasp-waisted" FDL-like look that was trying to happen, so that's... going away and the drive housing lines will be continued forward. The fly amps and phase wiring to the motors are going in that side space under big cover panels. This change will get rid of the need for breech wire covers/raceways and splicing the too-short stock motor phase leads in the process. It will also remove numerous items of bullshit from the lower drive housing and make it less packed in there.

I was reflashing to tweak delay schedules and heat up some low velocity cold start shots I was getting. Partial success (I get 150-160 ish first shots now), but no cigar. There shall never be; the process of tweaking timing schedules will continue ad infinitum. 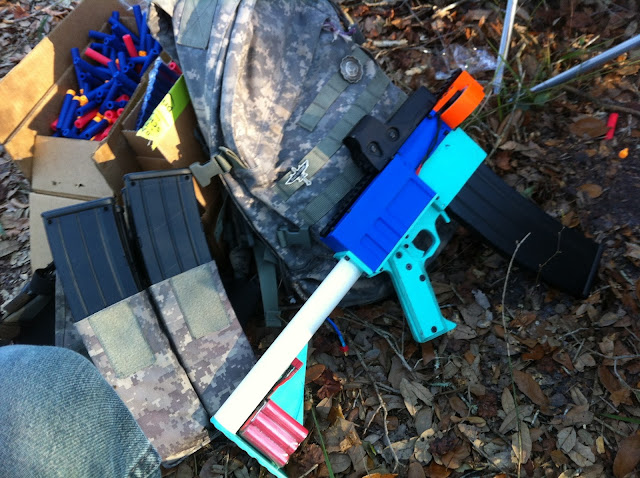 Overall though, "Layla" did well. An absolute successful test, and a lot of fun to run this.

This was the first time a T19/Hy-Con and a FDL have been in proximity. Some have said my blaster looks FDLish. Yes, there was inspiration for doing a horizontal-cage device, and I kept the trademark visible wheel edges because I thought it was cool, but the designs are actually totally unrelated. Note how much bigger Hy-Con wheels are, for one.

The titanothere in the room? The drivetrain internals. I promise, I will show you the prototype's guts someday, but here's the deal, it is a completely different design than a FDL. There is no "drive plate" like a Rapidstrike box. The crank web is, just a crank web. It doesn't support the bolt/yoke, and isn't circular. Rails in the case parts are the only contact for supporting the bolt. Less friction, less inertia hooked to the motor, etc.


Speaking of drivetrain? Direct drive FTMFW. Did super well. There are reasons I, as someone who has been playing since before flywheel was even a factor, am 100% down with stepper drives. Rock solid and super easy on darts and easily capable of the highest ROF anyone should be shooting at, even without any real envelope-pushing yet.

So now onto where Hy-Con is going and the internal debate I have about that.


When I designed the original Hy-Con System what seems like ages ago, the state of the art was different. People weren't shooting 200fps single stage. The top contenders were HBC Riot/OFP 41.5 with Riot wheels, and FDL cages. We were maxxing out at around 160fps average with excursions into 170s. I was angling for a system tuned to do 175 average, maybe 180, with 150 as a floor, and to do it using intentionally LOW crush. Thus, I made a possible blunder in futureproofing by not anticipating the possibility of needing to shoot more than 190fps for any reason so soon or that I would want to crank the crush up, and thus, not having enough surface speed out of my drive system's speed capability and wheel root diameter to support more than 190fps.

The "Hy-Con 1" is still well suited to the application it was meant for and I still admire the sort of conservative and balanced design that steered it from the get go. The V-Spec 2205 2350kv motors and 20A drives are nicely economical and compact and yet do a good enough job swinging these giant flywheels with decent dynamic performance, and if you're trying to shoot 175fps (or less for game rules), there isn't much point to more speed, either. I am very reluctant to outright ditch this setup. After all, T19 is not meant to do maximum-everything. It's meant to be a practical and competitive survivor.

At the same time, the Hy-Con's design basis has since mutated into awesomeness like Eclipse (200fps out of a Stryfe envelope), other similar Eclipsish experiments with other profiles have worked well to nearly identical results (Ultrasonic2 cages) and this giant dinosaur cage of mine is left in the cloud of dart dust from those two for lack of surface speed to support any further profile development. Oh, but my format has such potential in being so big, if I can get the tips to stay on the darts. I'm wondering if Hy-Con should have a more capable power system, eyeballing some 2306 2150kv motors and the use of 4S. Even more torque for faster startups plus support for up to 220fps. 4S on my current motors and the right high-eRPM capable controllers would be a tad speedy, but could support 250fps. There are motors, like the NTM 2836, that could net me even more torque and WAY more speed than either and are lower pole count to make those speeds easy on ESCs too. Oh the temptation.

Something I already notice is that available/accurate dart ballistic envelopes are becoming a problem in the ultrastock band. Accufakes to begin with have utter garbage velocity retention, I'm at a loss why ultrastockers would want them. Waffles are substantially better, but my 175fps Hy-Con doesn't seem to shoot much if any farther than a 150fps FDL setup with them - just a bit more accurately, but that is another matter entirely.

What worth is that 25 extra fps on a full-length waffle dart that's already going 175fps anyway? I'm open that I might be getting tunnel vision for the chrono and being led astray from system design goals by the allure of 15-50fps that might not even wind up being practical to exploit from a system of this root diameter because of dart decapitations. Especially since a better set of these original 9.5 flywheels (this set are printy, rough and imbalanced and my old PLA protocage wheels were better) would probably do 180 average with waffle. 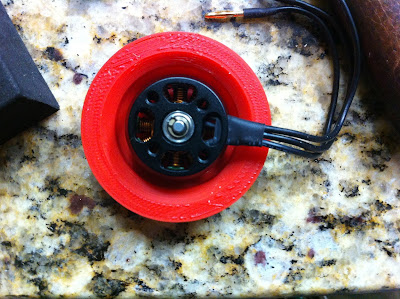 In any case I am ordering a bunch of 2205s and 20A Afros with intent to hold the course.

Of note in all this Hy-Con and 175fps and such discussion is that since I first fired a 'con at someone in anger, I... guess I'm officially fielding ultrastock blasters now. Where I have been fielding them is TBNC. Which was conceived as a superstock group and had 150fps velocity caps. Uh... About that. I feel kind of sheepish, but at least it was an agreed-upon and unopposed thing that the admin team just kind of simultaneously and flagrantly stomped on our own velocity rules. Ignore all the brushlessness for a sec and look in the background: 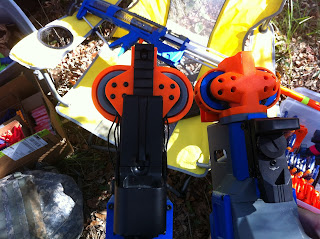 Yeah, that's a Caliburn, and it was used in combat last game.

I'm about to post the updated ruleset document. Change: Nix the 150fps bit. It's in the way and we don't want it there any more.

We're ultrastockified. It's official. Captain Slug, isn't that your dream? It's happening.

What I DON'T see is... nearly any practical change to gameplay. Last event saw stock and basic-upgraded Rival blasters and an older HvZ-specced Stryfe with AR and Artie aluminum smooth wheels and these were competitive just like my 130fps T17ACR would still easily be. Oh; it also saw SOCKS in the correct hands soundly destroy an entire team with ultrastock and high-end super gear.
Perhaps the moral is that player skill and luck always come before equipment, and a small amount of well laid out cover and balanced objective design from the get go makes a robust and fun game that armsracing can't derail; but I would call good game design a given. More or less, I have serious doubts that the "Super-to-Ultra" transition is anything other than a straight-up enhancement to superstock in any situation where >150fps can be tolerated. I don't think there is an accessibility problem nor a substantial change in game dynamics associated with it.
Posted by torukmakto4 at 2:43 PM