There has been quite a bit of buzz about this round already. 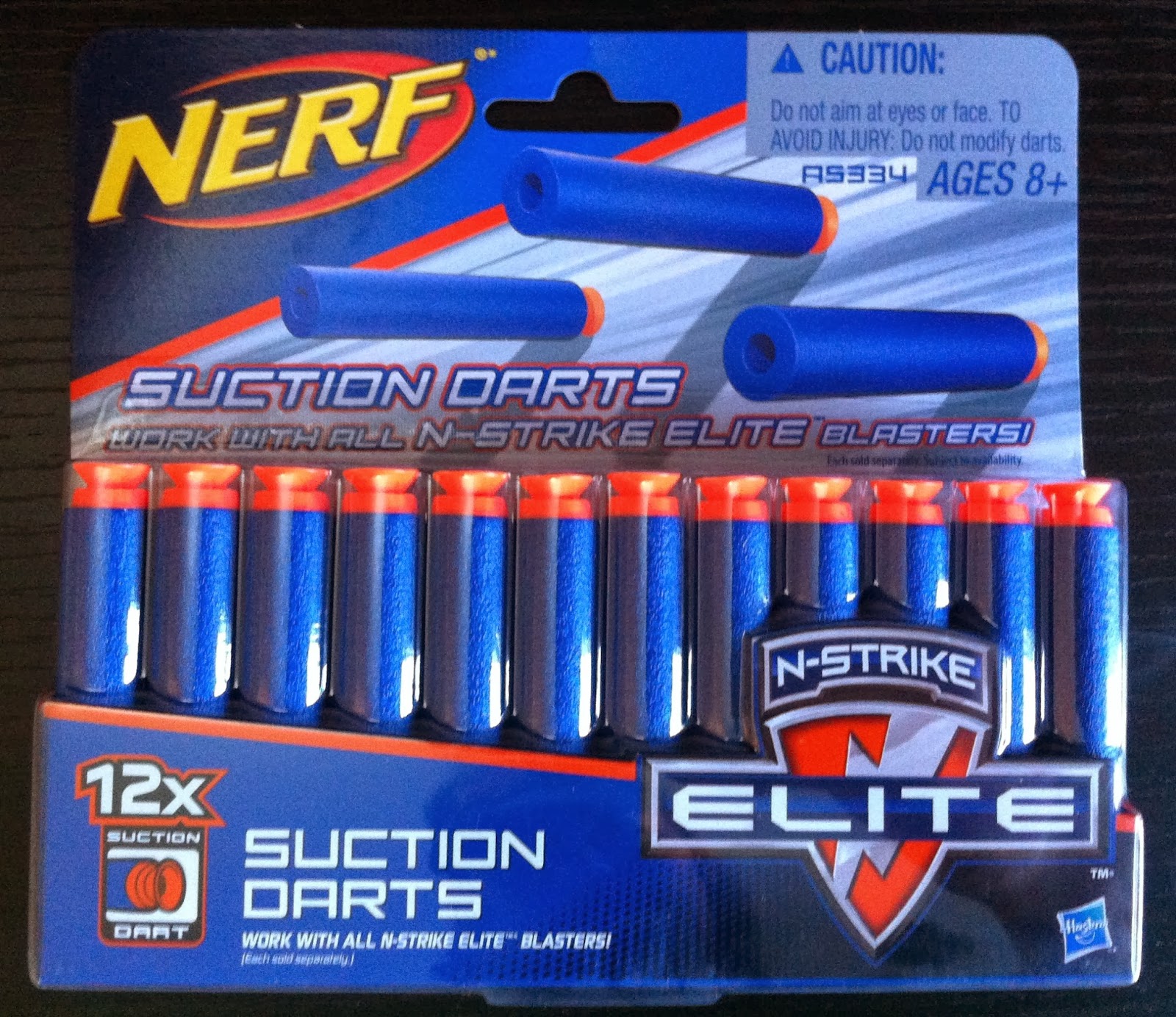 12 round card pack. Purchased from the Butler Plaza Target in Gainesville FL for $4.99. These are available in 12 round packs and 30 round standard cases like other New World Hasbro darts. 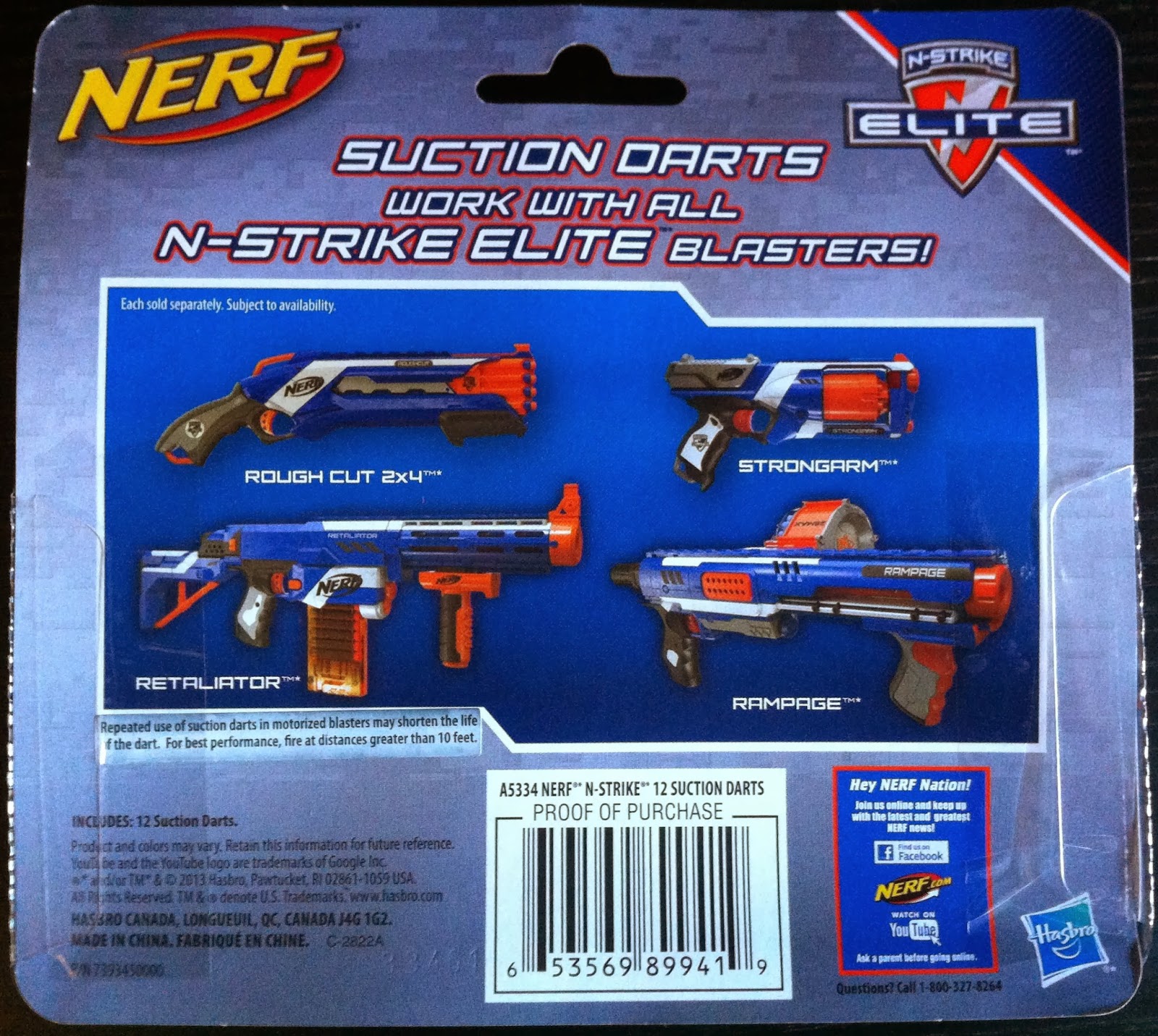 It is a Hasbro product that carries the N-Strike Elite brand, advertised to be compatible with any magazines that can handle Elite darts/Streamlines and positioned as an outright replacement for the old suction micro as well as for adding the whimsical suction tip capability to non-micro compatible guns.

The tip code is W.

Foam is as expected; standard Elite foam. The big Elite Standardization has made foam so boringly uniform between codes. 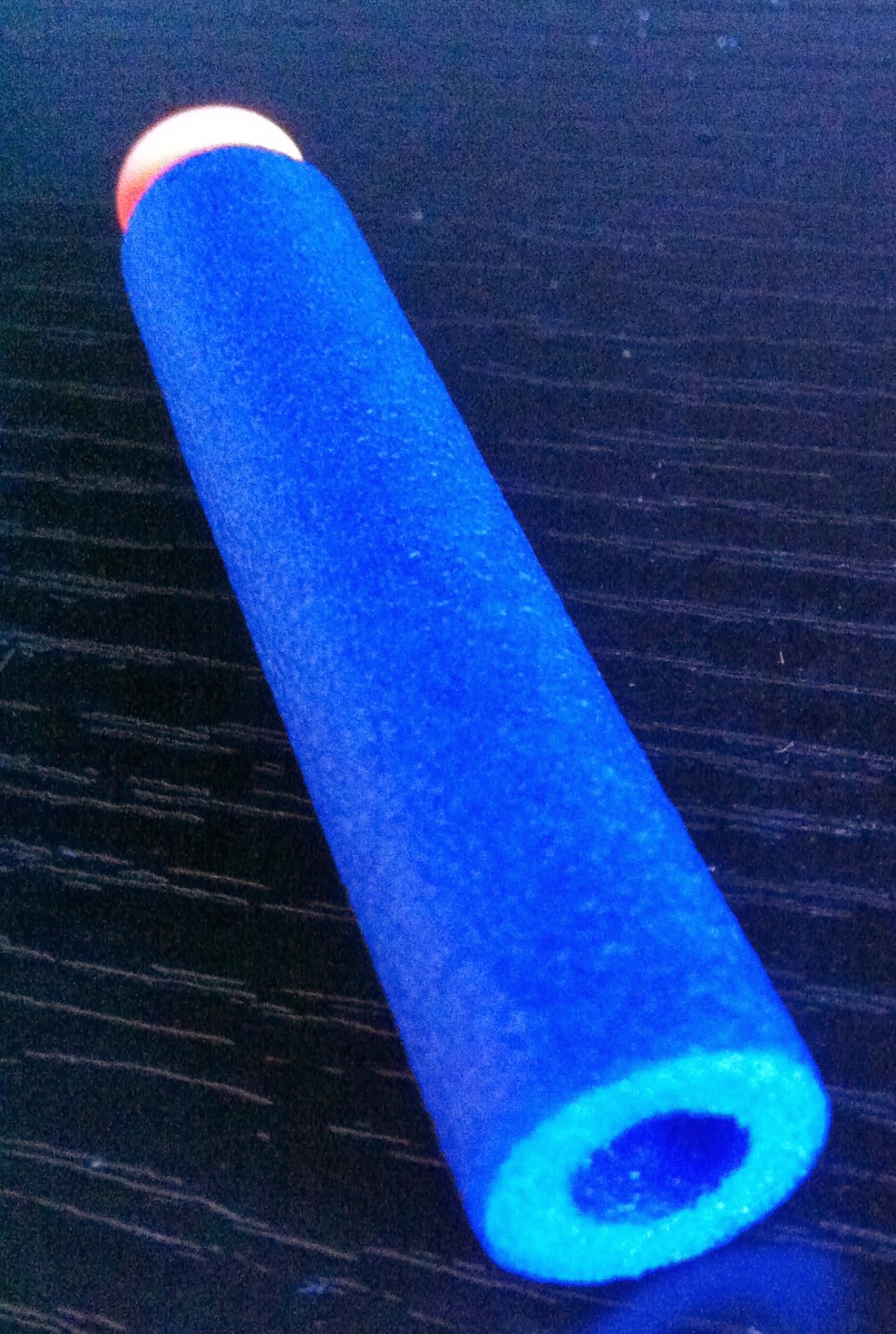 What a lot of nerfers are talking about is accuracy improvements and effective range. That will have to wait, though. External ballistics occur after the round has left the muzzle - so let's first deal with getting to that point. This first post will be similar to when I looked at the ZS Elite, with the tedious important stuff picked off tediously and the usual battery of bench tests. So here we go. 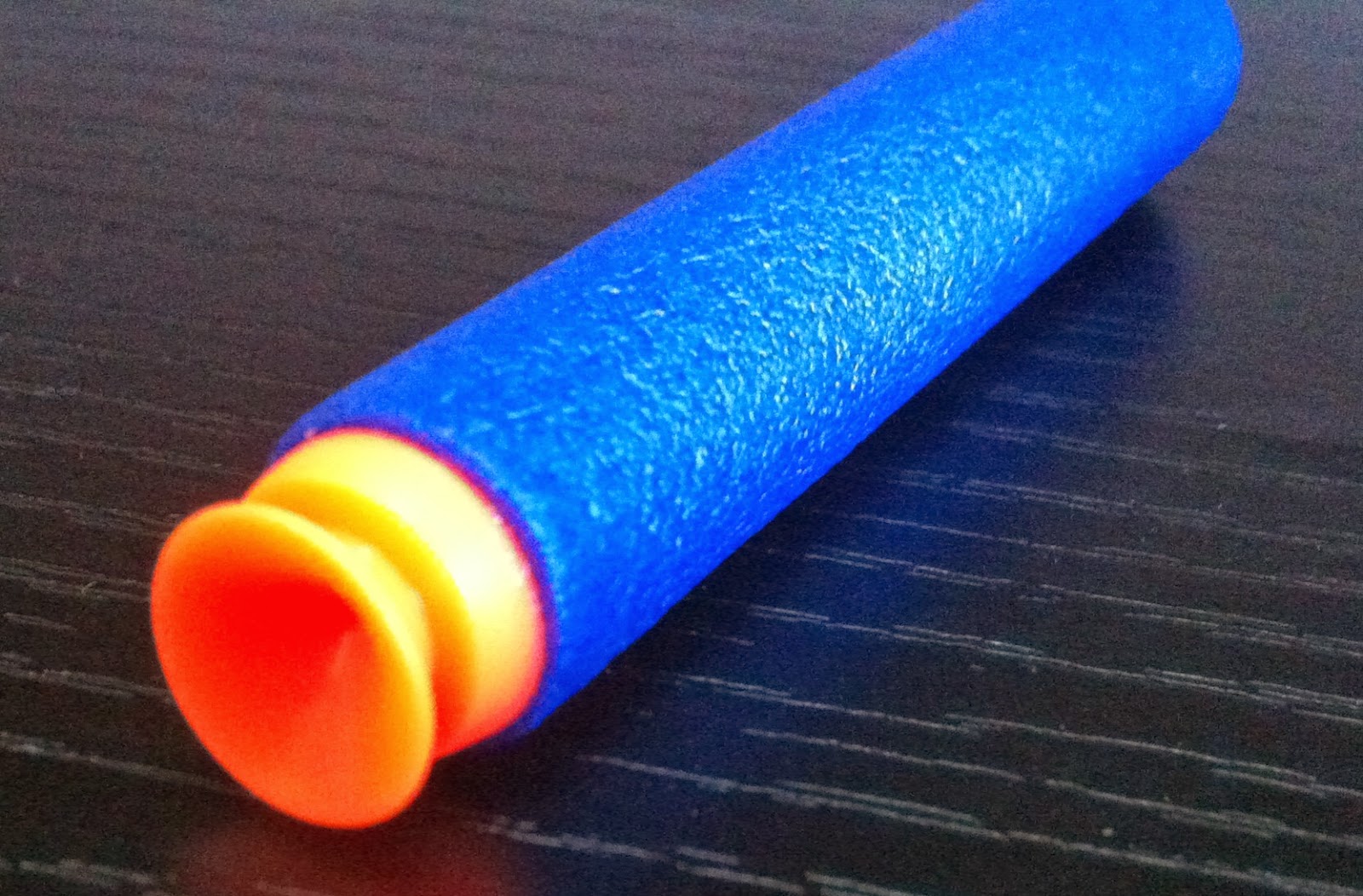 This is the new tip design.
Note that unlike older style Streamline and Elite domed tips which have the same diameter as the foam OD at the base, the USD tip is rebated quite a bit including the suction cup itself. This proves to be beneficial to magazine reliability. Far less rubber friction occurs than with conventional dome tips. 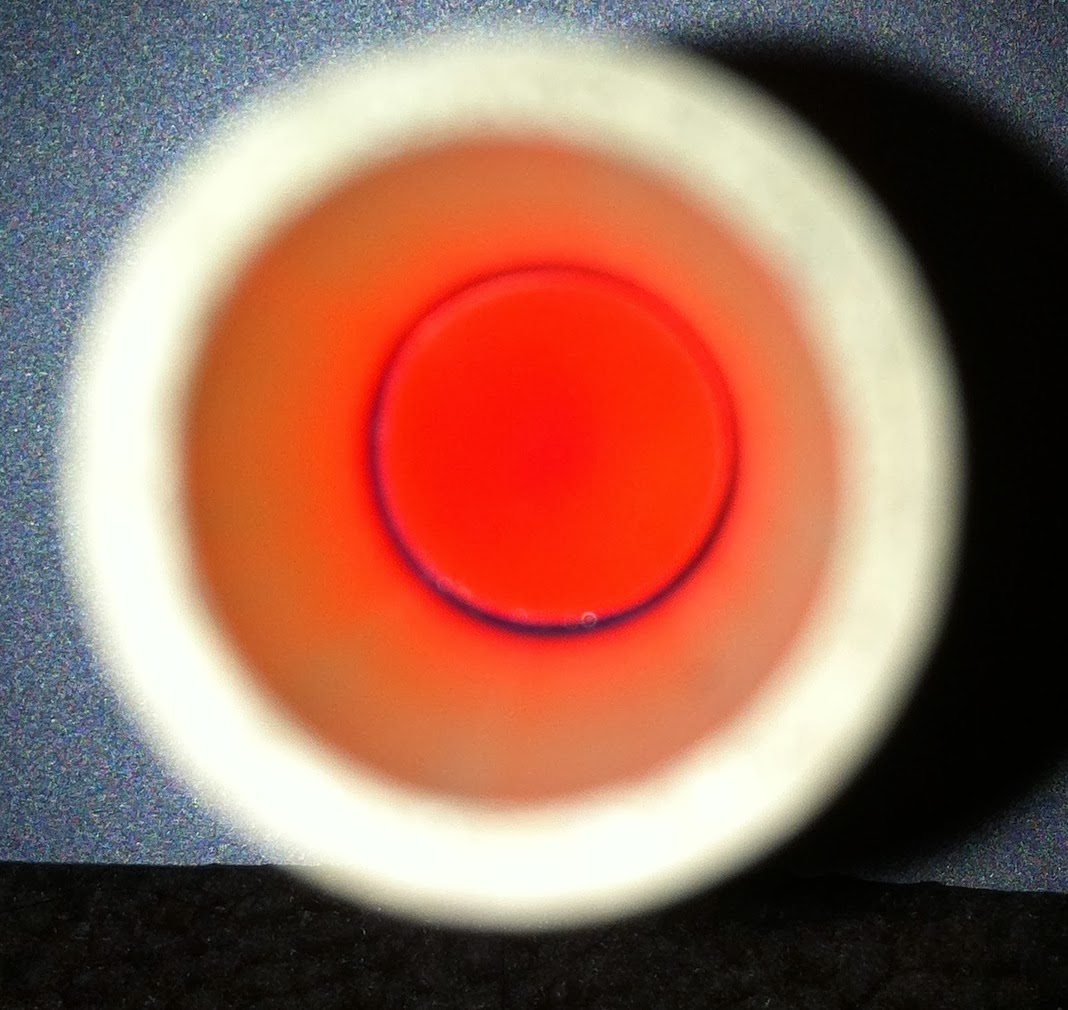 It also prevents squibs and erratic velocities from long barrels. Shown is a breech-loaded dart seen from the muzzle end of a Blue Line barrel, with the clearance between tip and bore quite apparent.

That said, long barrels and this dart are not a match made in heaven. The evidence and likely cause will be discussed after the chrono data link. 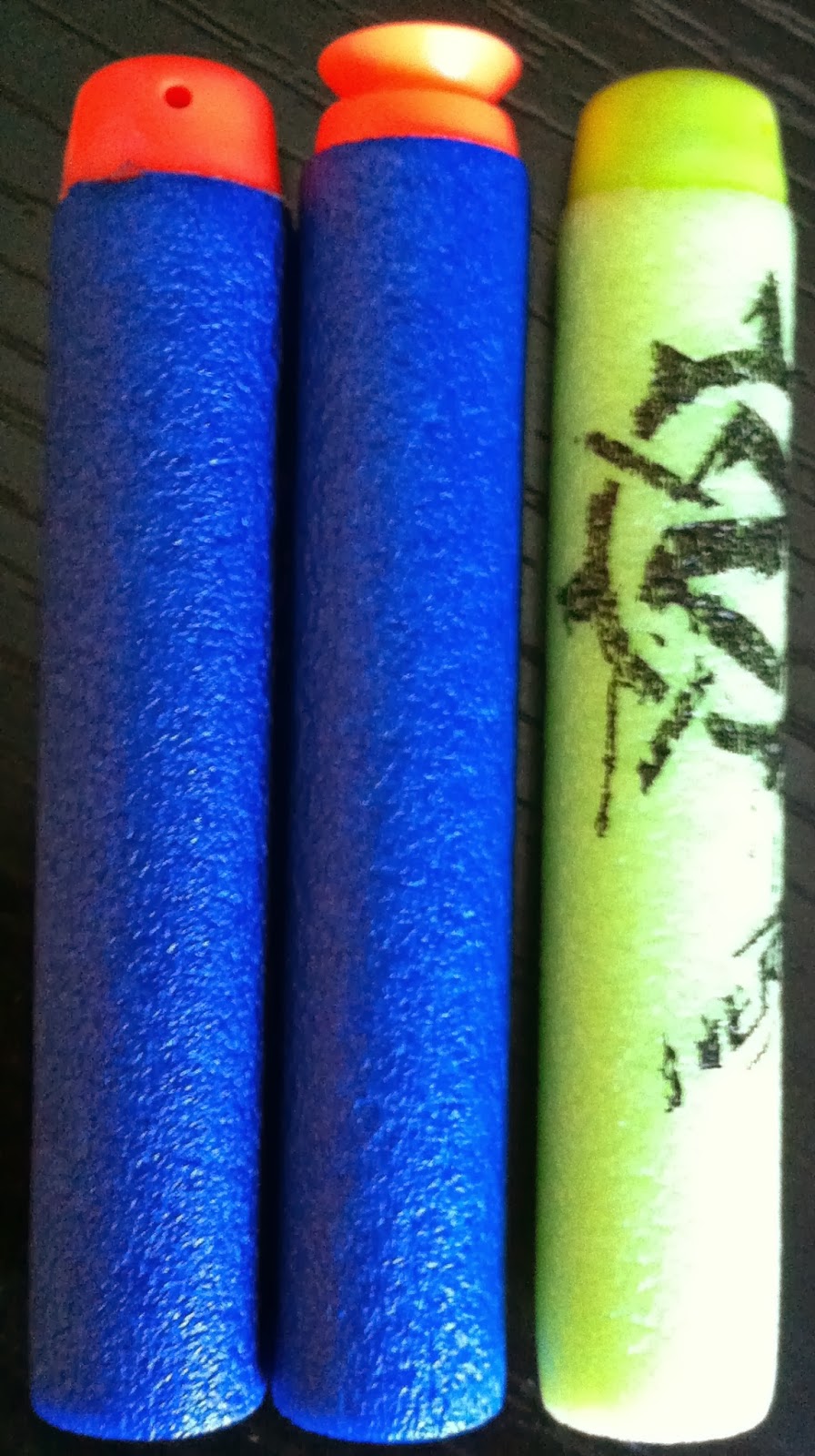 As shown here compared to a Standard Elite and a ZS Elite, the overall length of the USD is slightly greater, as is the foam length.

No magazine compatibility problems are expected, though. The length increase is approximately 1/16" and all N-Strike magazine systems have far more than enough allowance for round length.

However, the length increase vanishes with the suction cup compressed. 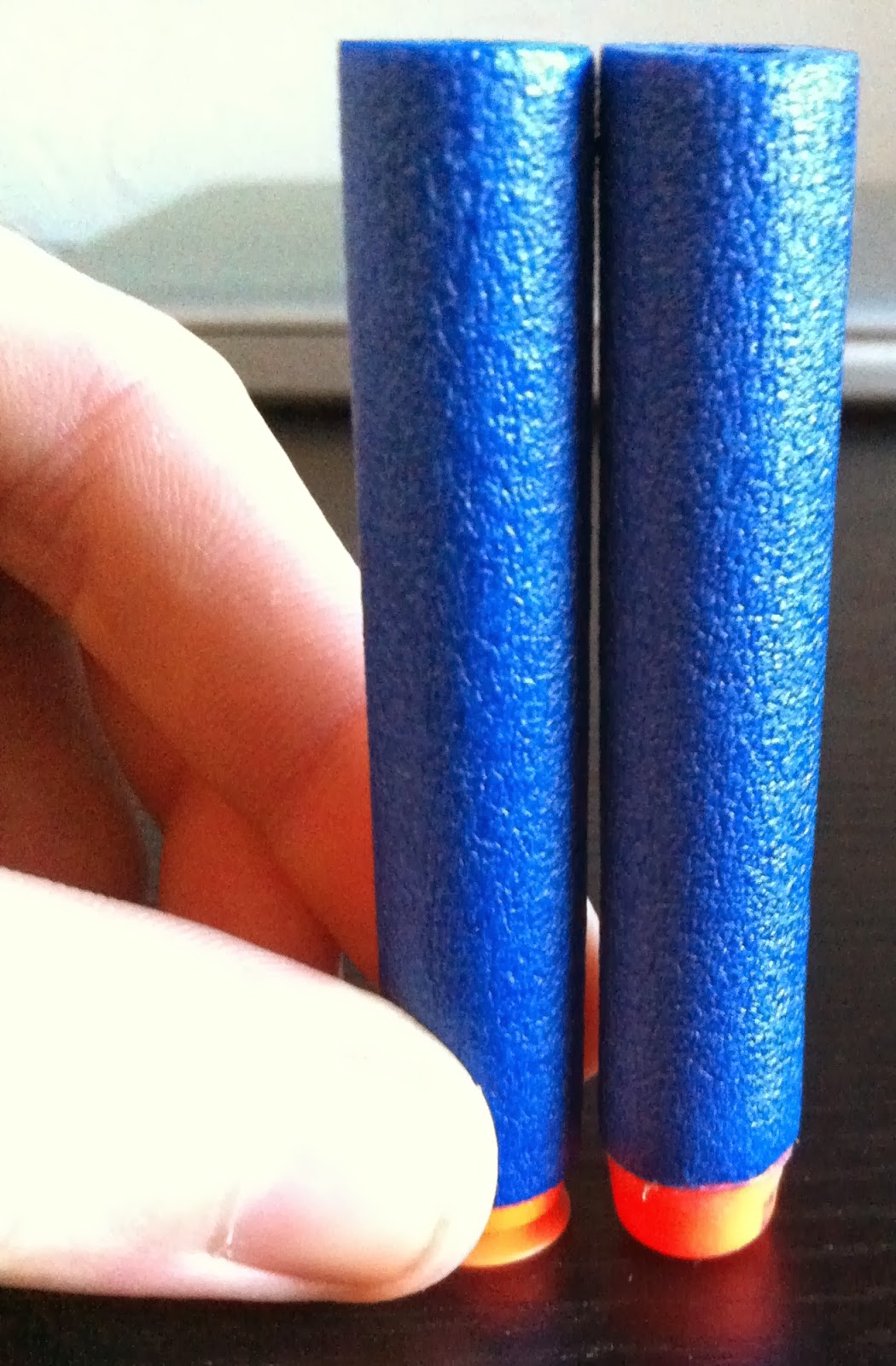 My theory is that the extra overall length is to compensate the suction cup flexibility and ensure reliable achievement of the full pushback distance on springers with barrel-in-bolt (BIB) breeches. On stock guns, this is a matter of opening the AR, so a serious performance concern.

As to pushback distance, I tested this with a Retaliator which is a decent representative of the newer style (swinging door) system in Hasbro guns.

A ZombieStrike Elite was used as the control...

...the action was brought almost into battery past the point where the pushback door has released and fully swung open... 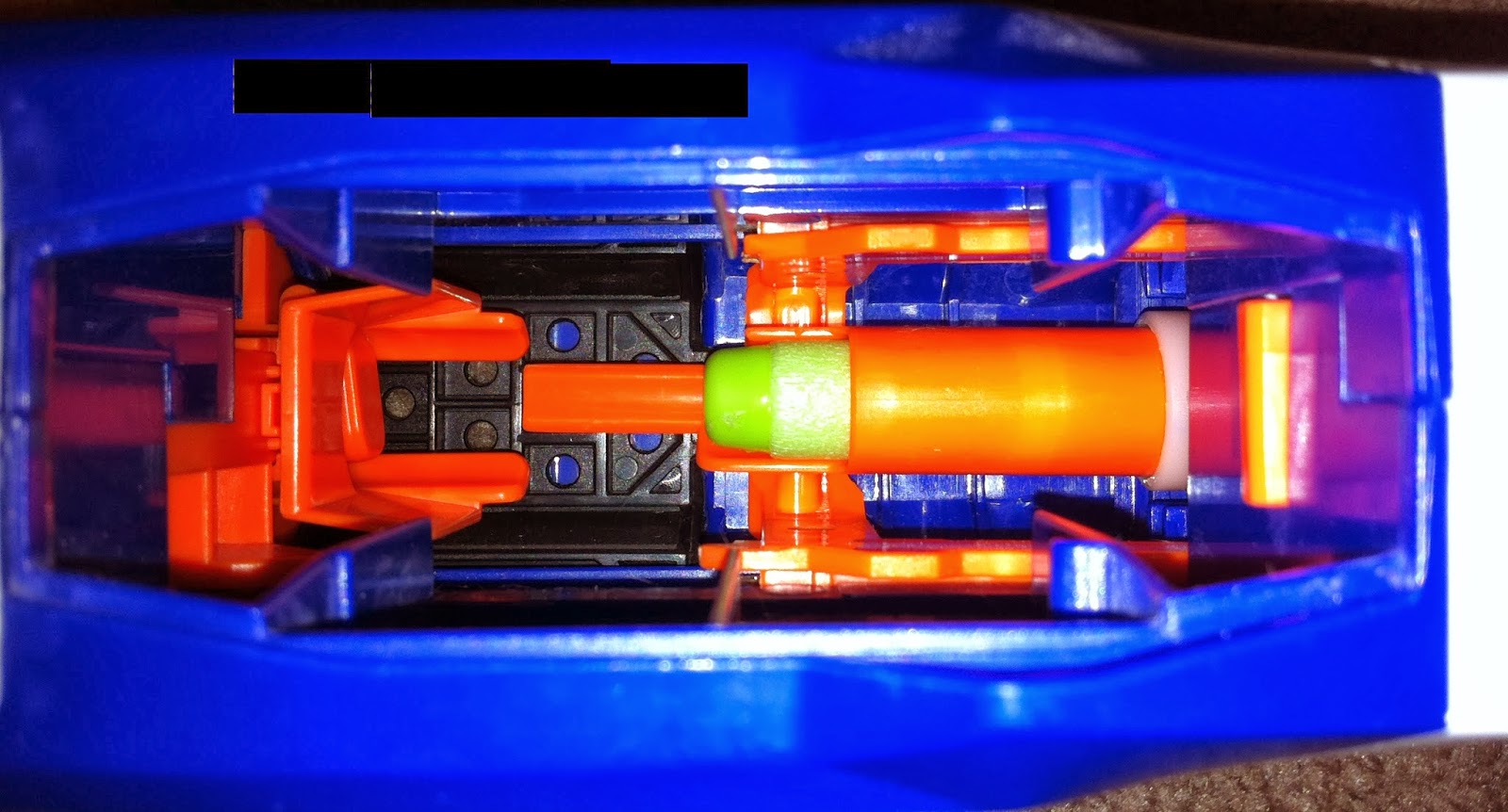 ...and here is where the dart ends up. Remember, the goal here is to get the foam jammed into the bolt as far as possible, since the more pushback distance, the greater the effective barrel length and the less dead volume. 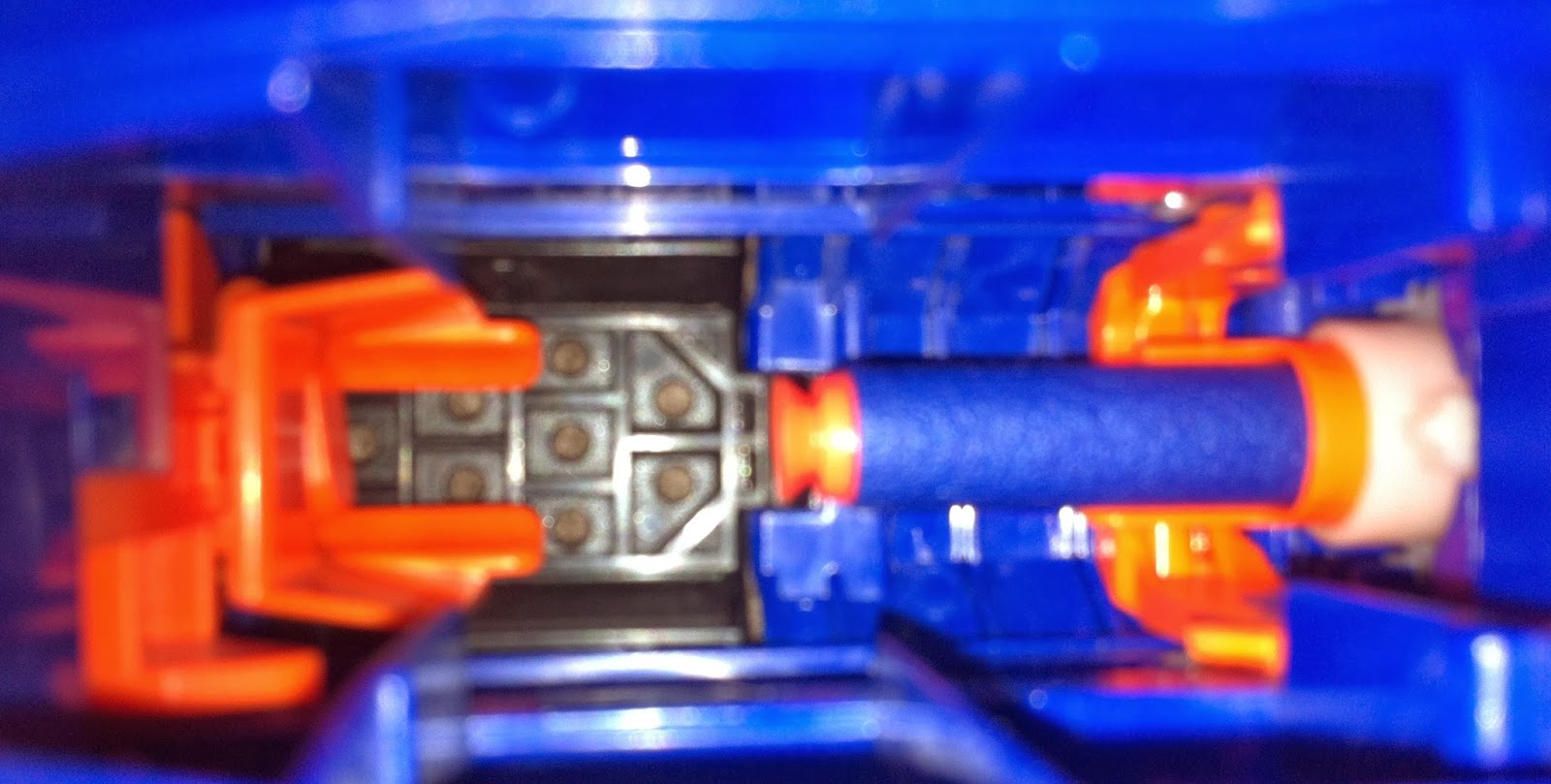 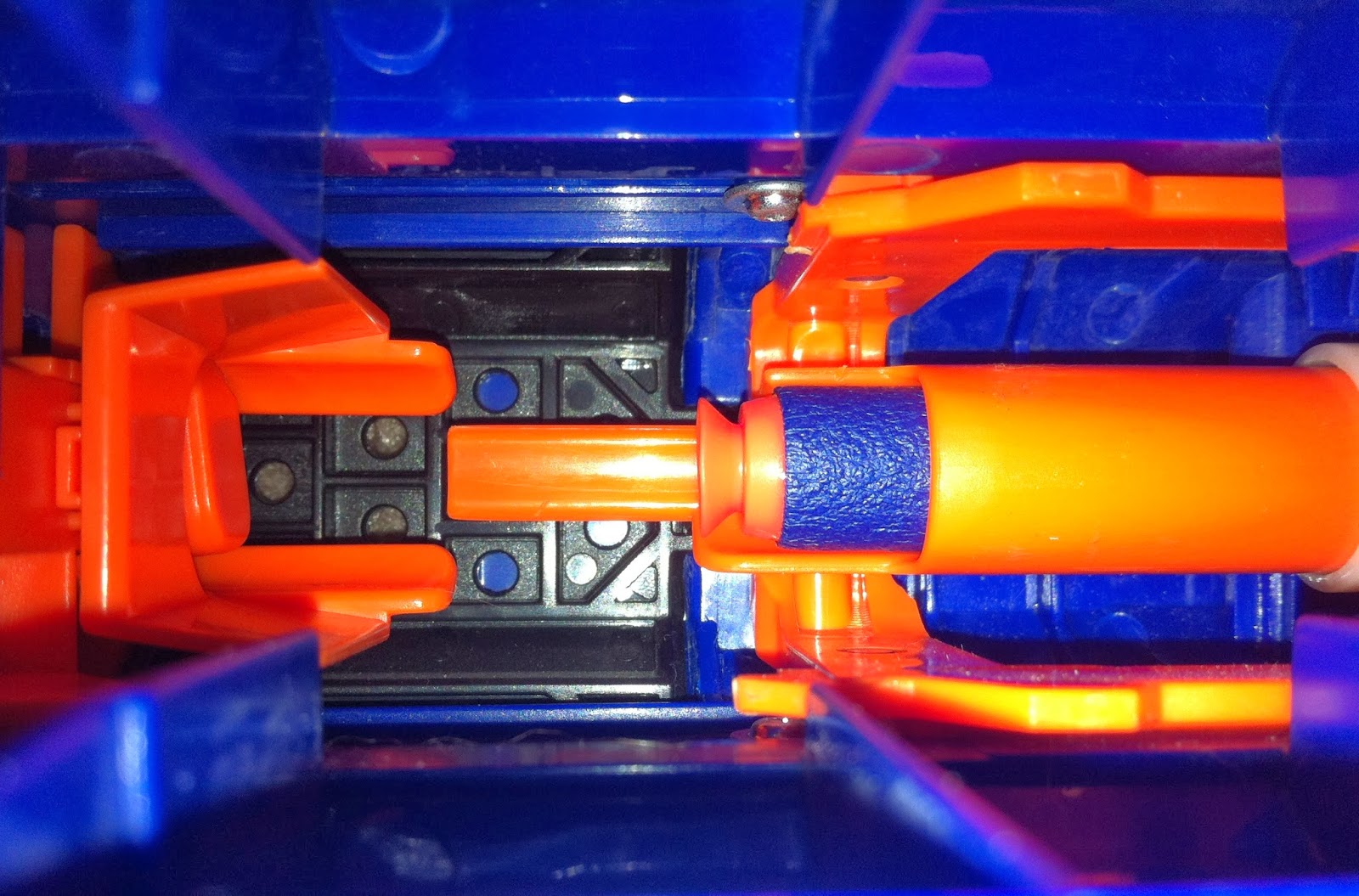 There were some predictions of problems, but none are to be found. The suction darts pushed back exactly like domes, perhaps even a bit farther. No reliability problem occurred here either despite the flexible rubber suction cup getting hit by feed system parts. 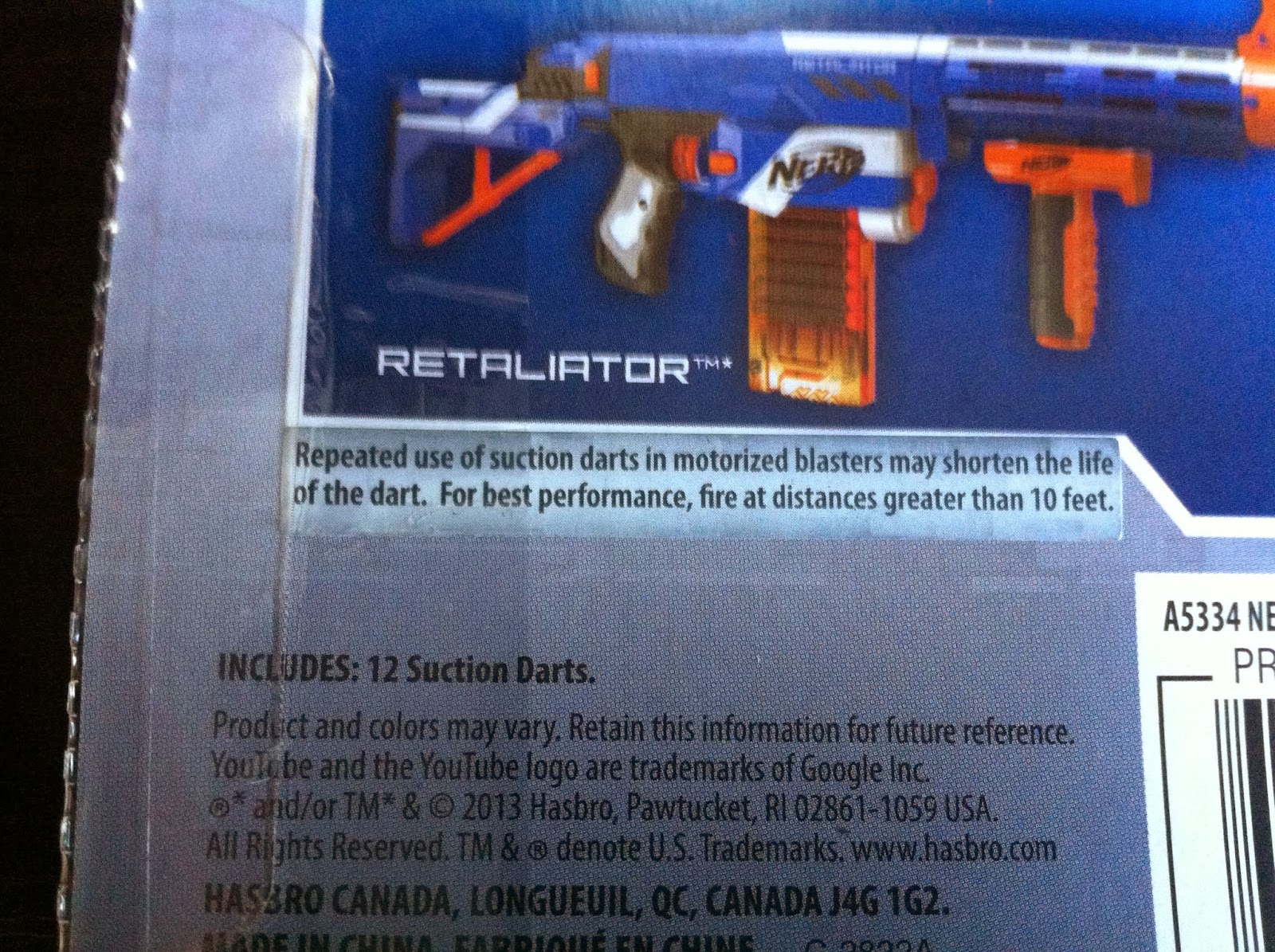 Now here are 2 strange notes on the packaging.

One is a warning concerning the service life of darts when used with "motorized blasters" which I am left to assume refers to flywheel launchers.

The other is an instruction to fire "at distances greater than 10 feet" to achieve "best performance". This likely relates to firing these suction darts at smooth surfaces and expecting them to stick.

So what are the ramifications here?

Well, for one thing, the latter warning is a bit of an excuse. As suction darts these things are abysmal. I fired them at a variety of flat surfaces which have formerly retained suction micros well, and only a few stuck regardless of the velocity. Most of them bounced, and bounced quite energetically. The combination of the greatly reduced tip area versus the outgoing micro and the greater muzzle energies of the modern era guns really kill the fun of suction tips. So, that's out of the way I guess. Do not buy these if you want suction darts. If you want a replacement for the Nerf suction micro, buy Buzzbee micros instead - although there is no substitute for the real thing, and your best bet remains NOS Nerf suction micros. Bit of a shame really.

Now that other flywheel bit is somewhat perplexing. It is difficult to say what is meant by "life" in this case. Perhaps this only refers to the suction tip's functional life. However, it is logical that the rebated tip design would accelerate foam wear.

In a dome-tipped streamline, the rubber takes some of the hit from the flywheels. In the USD, it is the front edge of the foam alone. Perhaps that burndown zone wears faster with these. Perhaps it wears faster with "stocker" guns then with domes. There was a Rapidstrike equipped with Blades in the test lineup and it did inflict so-called "scorched earth" effects on each and every one of the tested USDs as it hammered out some nice velocities. Whether it really is faster will be addressed in the follow-up post - but it did seem worse with these.

And here is the chrono session data.

A parallel test was performed with new, A-code Elite Standards as a reference point. 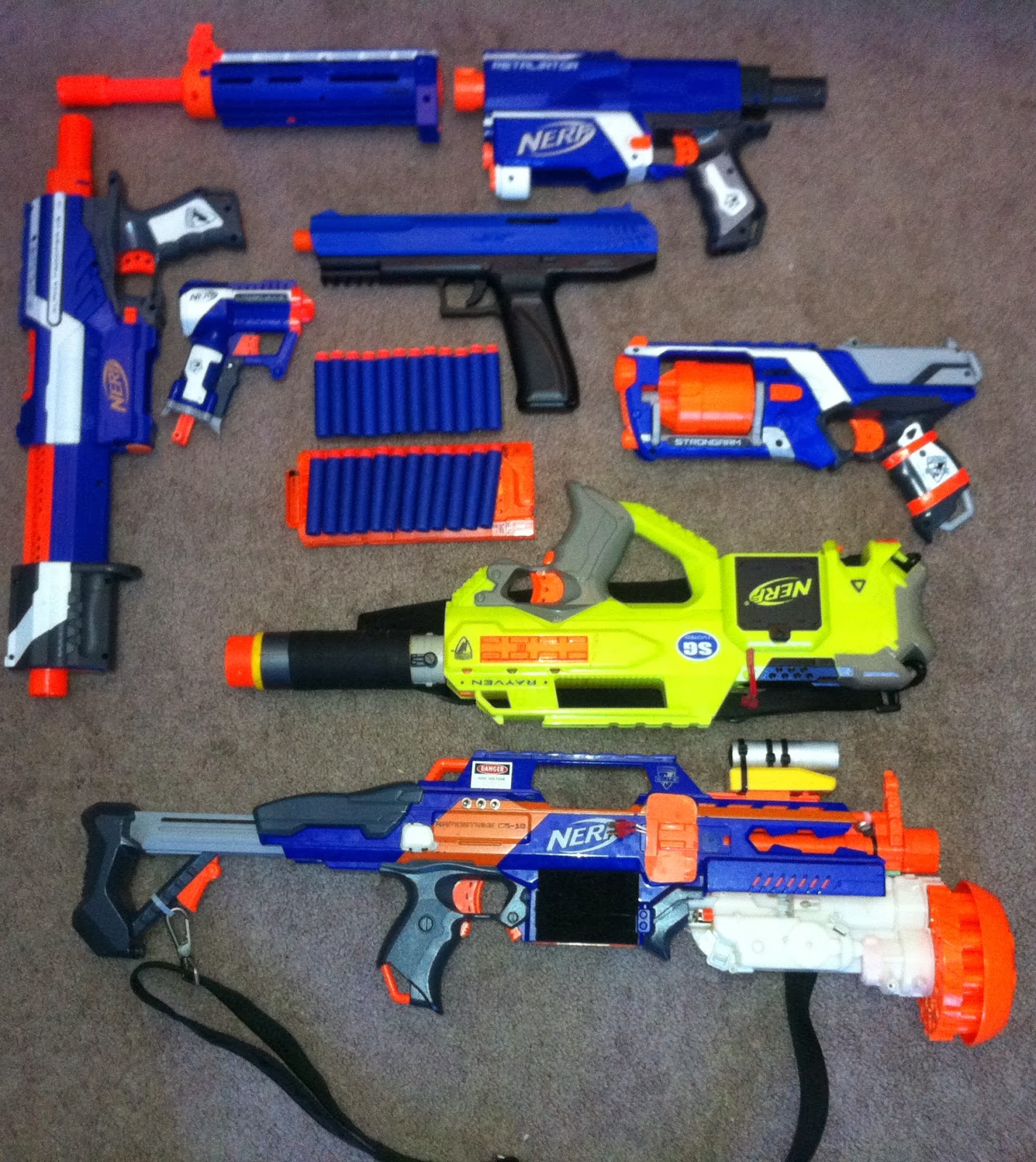 The representative battery of launchers:

Strongarm represented revolvers with "weak" cylinder sealing. Also, as seen before, it acted as a consistent and generic dart durability reference point at beginning and end of session.

RS (the swarm was not used in the test) covered high-velocity flywheels.

The Rayven was not usd in the chrono session but was used in some mag reliability tests.

Velocities in many cases increased slightly. The USD seems to be a lower mass than the Standard Elite though I can't verify that at the moment.

Durability in springer use appeared to be on par with other darts, perhaps only slightly worse (though due caution about limited sample size applies here). After all the abuse of repeated firing into the backstop, loading, flywheels and high-velocity springers, the Strongarm reported just under a 2 fps average loss for the USD and just under 1 fps for the A-code.

Performance with long barrels was found to be questionable. Whereas the A-code easily punched out 154fps with the NF, the USD hung around 150, even as velocities elsewhere increased. Once again, mention must be made of sample size but it does appear efficiency is reduced with long barrels. This is most likely due to the longer core length of the USD - while I did not dissect one, the tip has a longer core, and as with Streamlines and their allergy to barrel length > 2.5" this is expected to cause increased barrel friction by "blocking" part of the foam from exposure to chamber pressure so that it does not compress.

Flywheel velocities skyrocketed. This has not been seen before in similar-mass darts, and the rebated tip design should be working against it, but the RS numbers tell the real story. The core length may be to "blame" here as well.

As to reliability, well, nothing happened that caught my interest. One of the new stiff A-codes misfired from the Strongarm on its first shot. None of the USDs malfunctioned any of the guns at any time.

A worst-case mag test with the rounds shaken forward to let the tips scrub caused no trouble. In general these appear to be insensitive to loading versus domes.


What remains to be seen

The accuracy and range worries, of course. And taking things out of the lab into the ambient environment. Of course. No recommendations yet - but stay tuned for the follow-up post once these get some kind of field action.