Or at least complete for now, until I get some cells to make a 3S battery for this gun; and/or give the Xtremes a shot with it. 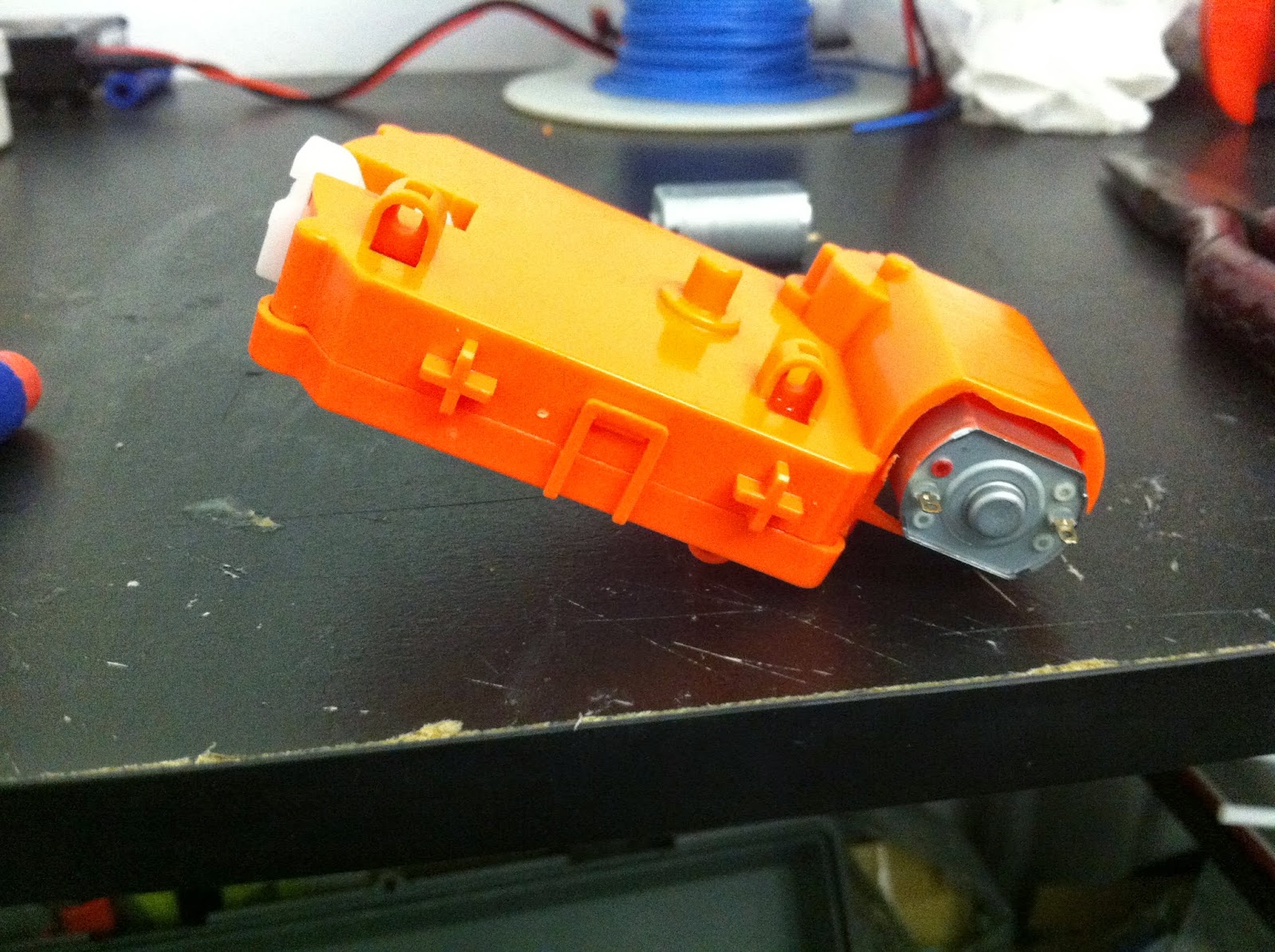 In the meantime, though, I got some images of some stuff that might not be that well documented in the NIC.

This is the pusher box with a FK180 motor installed. Note the shell modification is not very complex; the formerly enclosed endbell area (to fit a 130 motor) is removed. 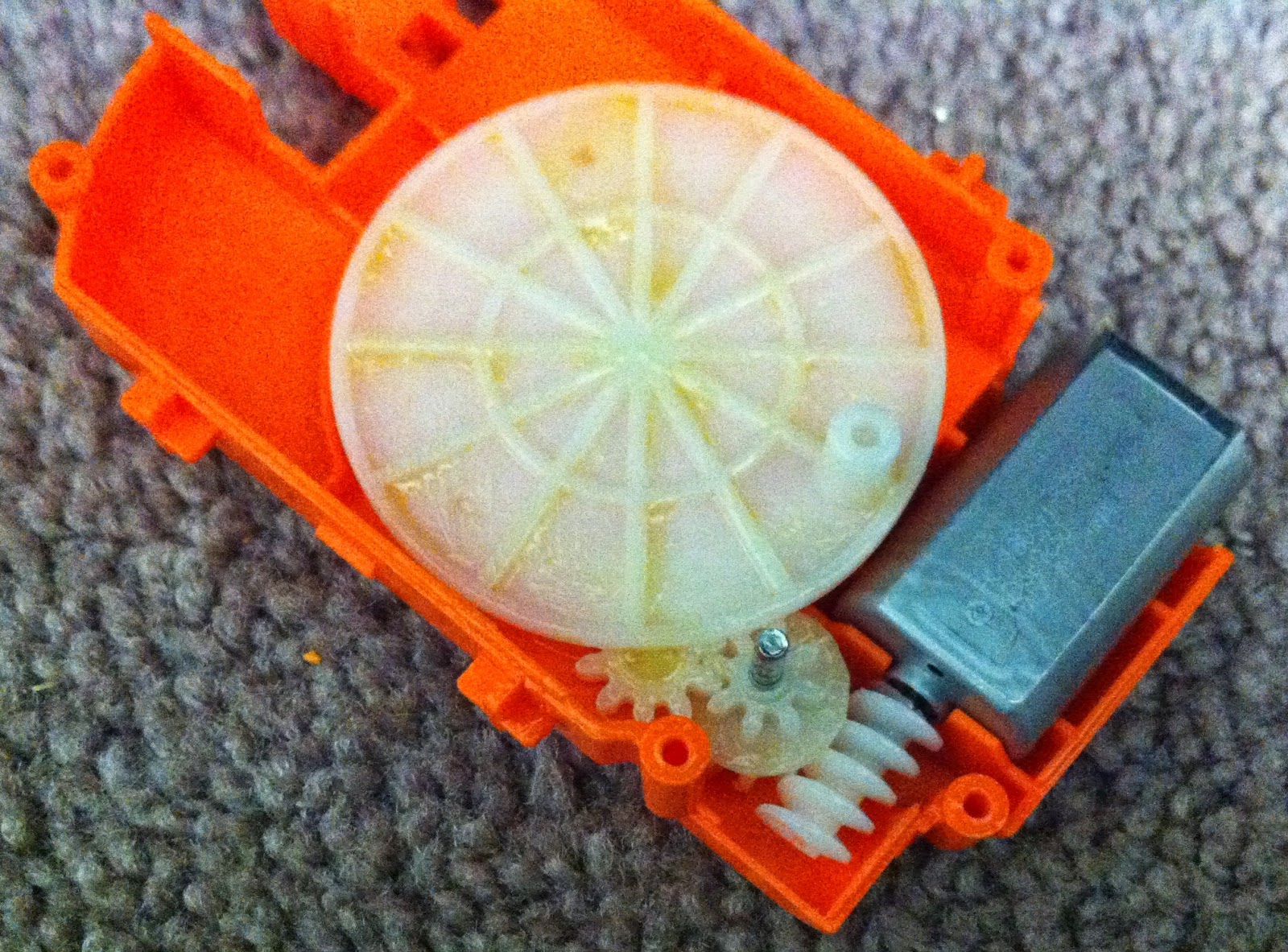 180 install with the shell open showing the worm installed.

The stock "socket" part of the mount does not need to be modded, only the end that would interfere with the 180 can length.

Once the screws are installed, this is a tight fit. Movement of the motor is not likely, although something to retain it positively is desirable. I usually make that part of the external motor cover. 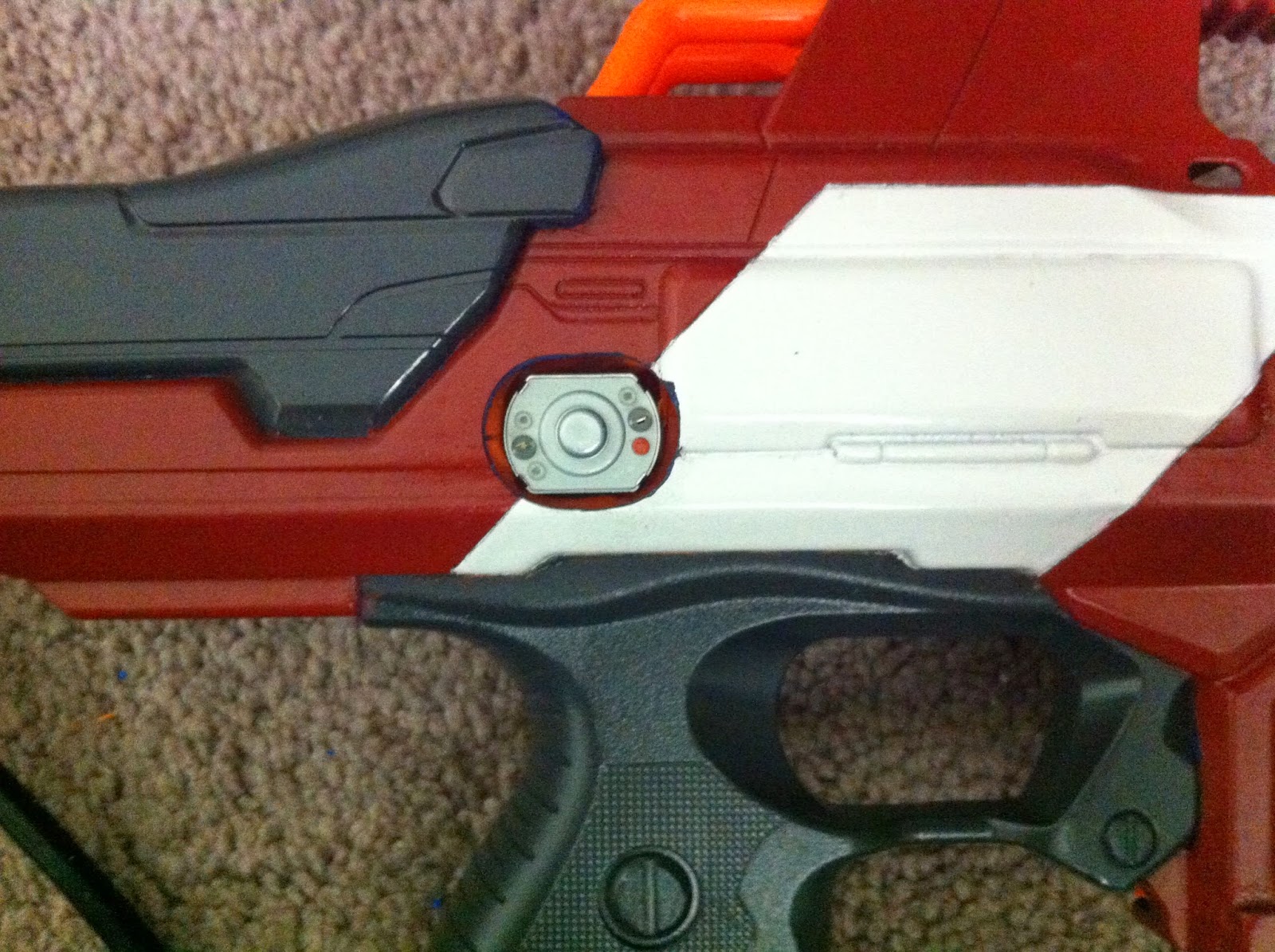 This is the receiver hole location for a 180 pusher swap.
A cover like that for the flywheel motors will be provided.

Unfortunately, I painted before realizing that this receiver mod had been left out. D'oh. 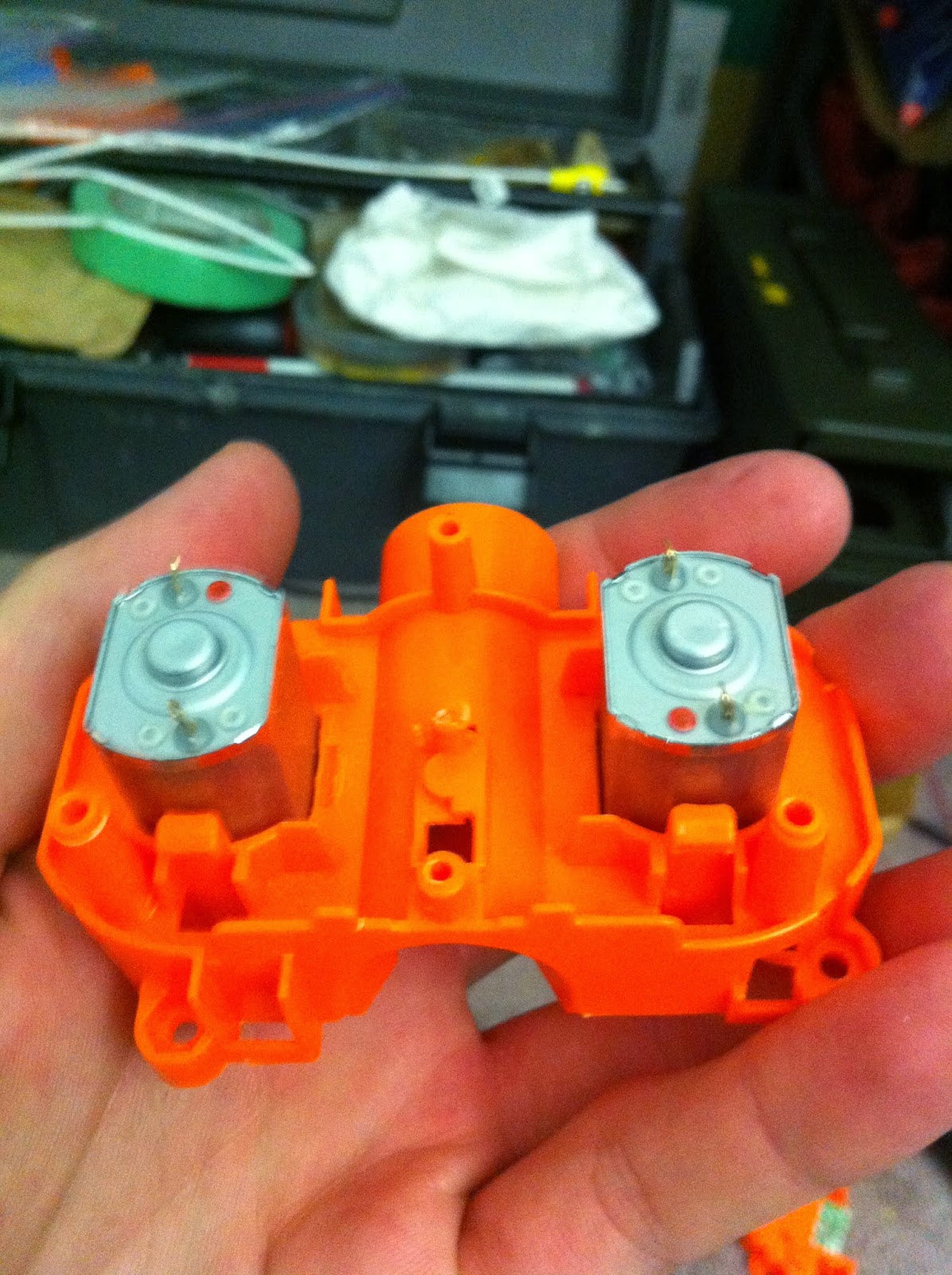 Of note here are the problems many people have had with installation of 180 motors.

The mount sockets are designed for the finished can diameter of a 130 motor. While theoretically of the same cross-section (but different lengths and endbell designs), the FK180 (or perhaps just FK in general) can is slightly larger than the FA/FC130 can and thus the fit is objectionably tight, to the point you might break something trying to install motors, or at the very least create a problem with mount deformation and accuracy.

These mounts have ribs inside used to achieve the relevant dimension, so those need to be shaved a bit. Use of a grinder is not advised. A knife is more suited. Also, if you have a tight press fit in the final setup (which you should if you don't plan on running brackets, screws or hold-down straps on the motors like stock) you should lube the front end of the motor can very lightly before shoving it in. 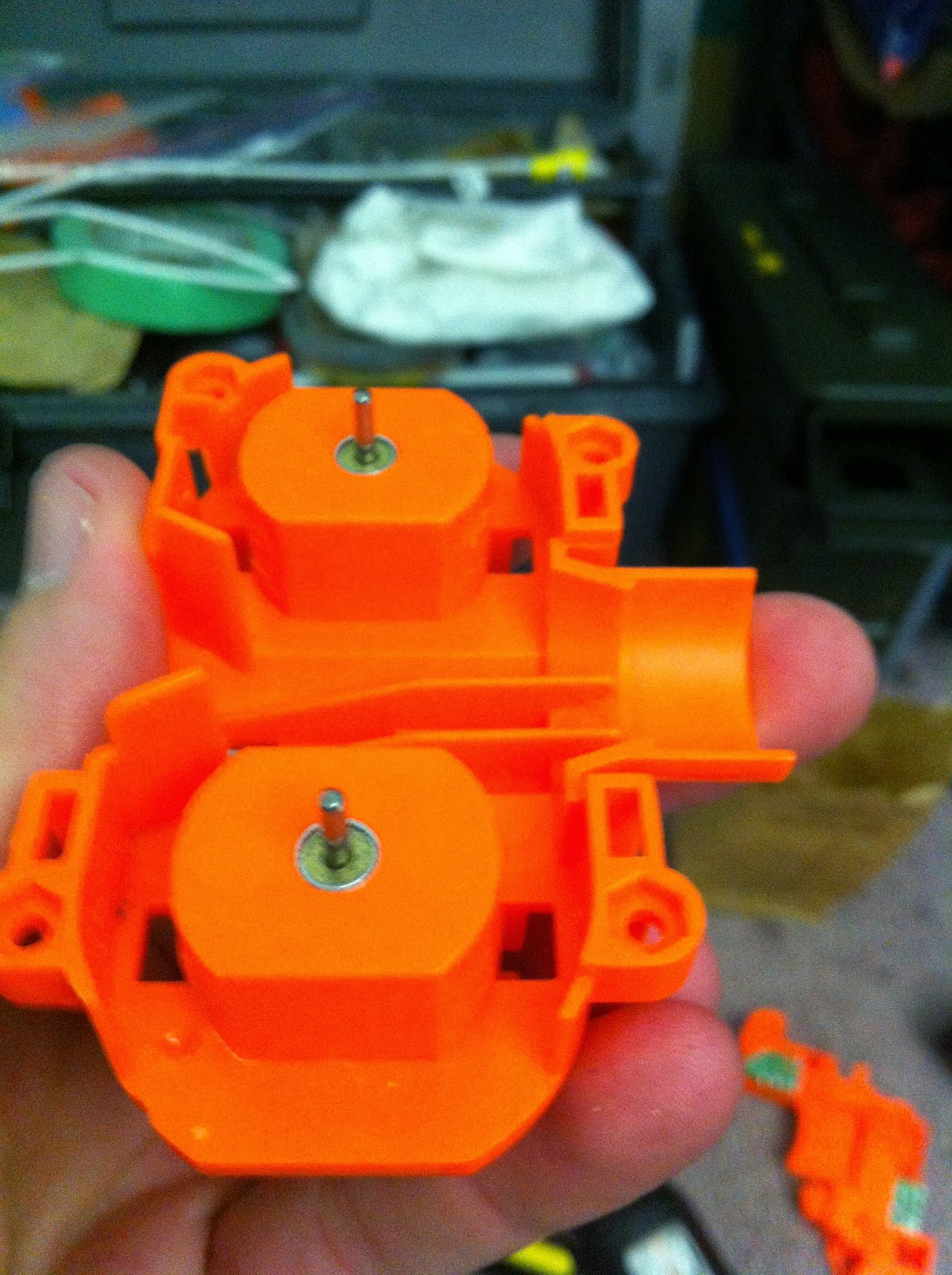 Also note the orientation of the red endbell plug (polarity marking) is toward opposite ends of the cage. This gets the correct rotation direction with leads going straight across the cage. In this case the rear terminals (green wire) are positive for forward rotation.

Yes, you do need to fully seat the motor can into the mount or you will have trouble. A few cases of flywheels coming off the shaft have been described and the likely causes include insufficient shaft engagement because the motor was not seated before installing the flywheel in its final position.

Note the position of the bearing snout, flush with the mount surface. 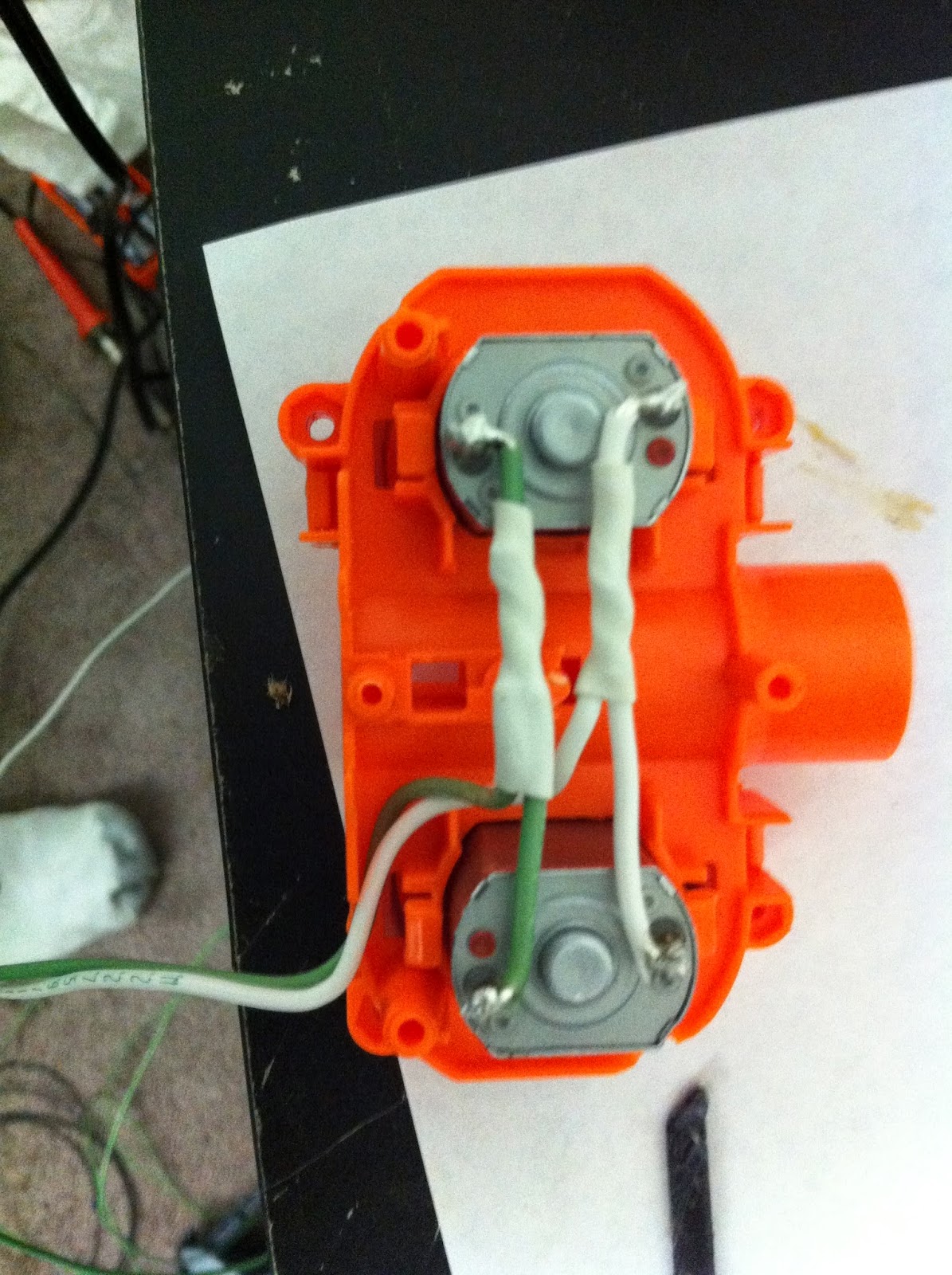 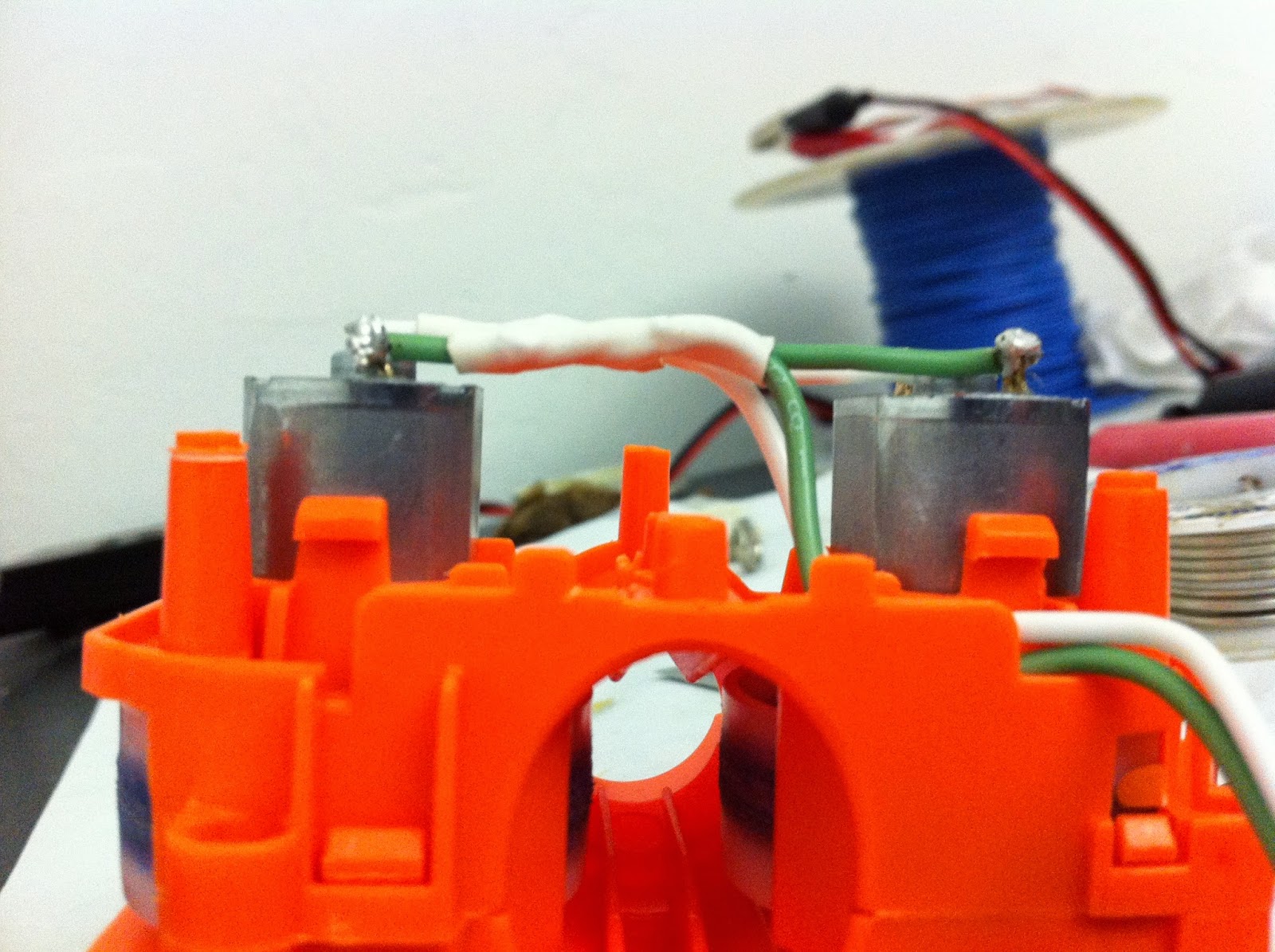 Good practice is to keep the wire away from any kind of severe contact with the motor can. The rear edge of a FK can is sharp and can cut insulation. If you use PVC insulated wire you also don't want wire to touch anything that could get hot in some condition, including motor cans. 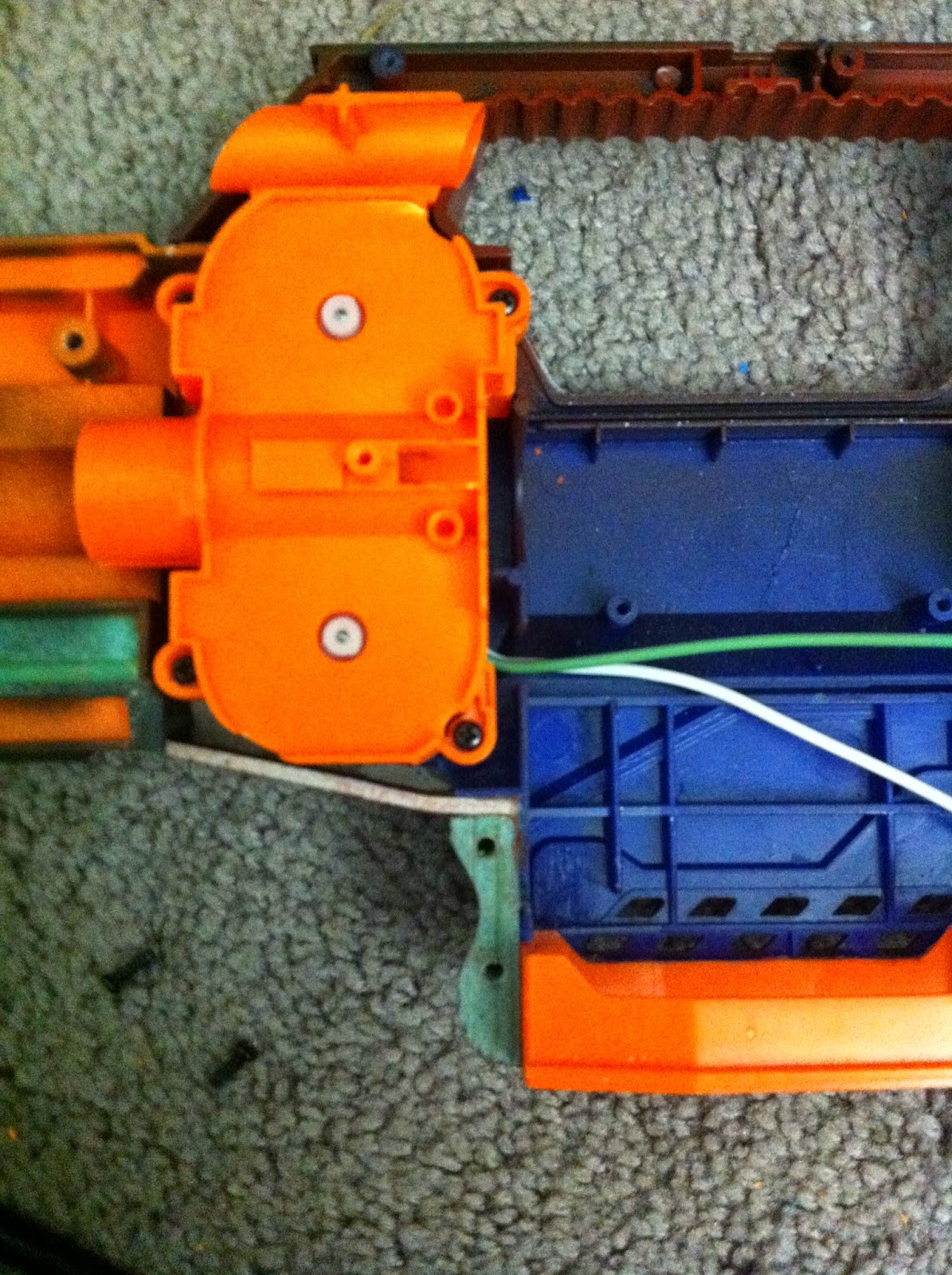 Be careful with the magwell wire cover in the RS. It is easy to pinch the wire and damage insulation. 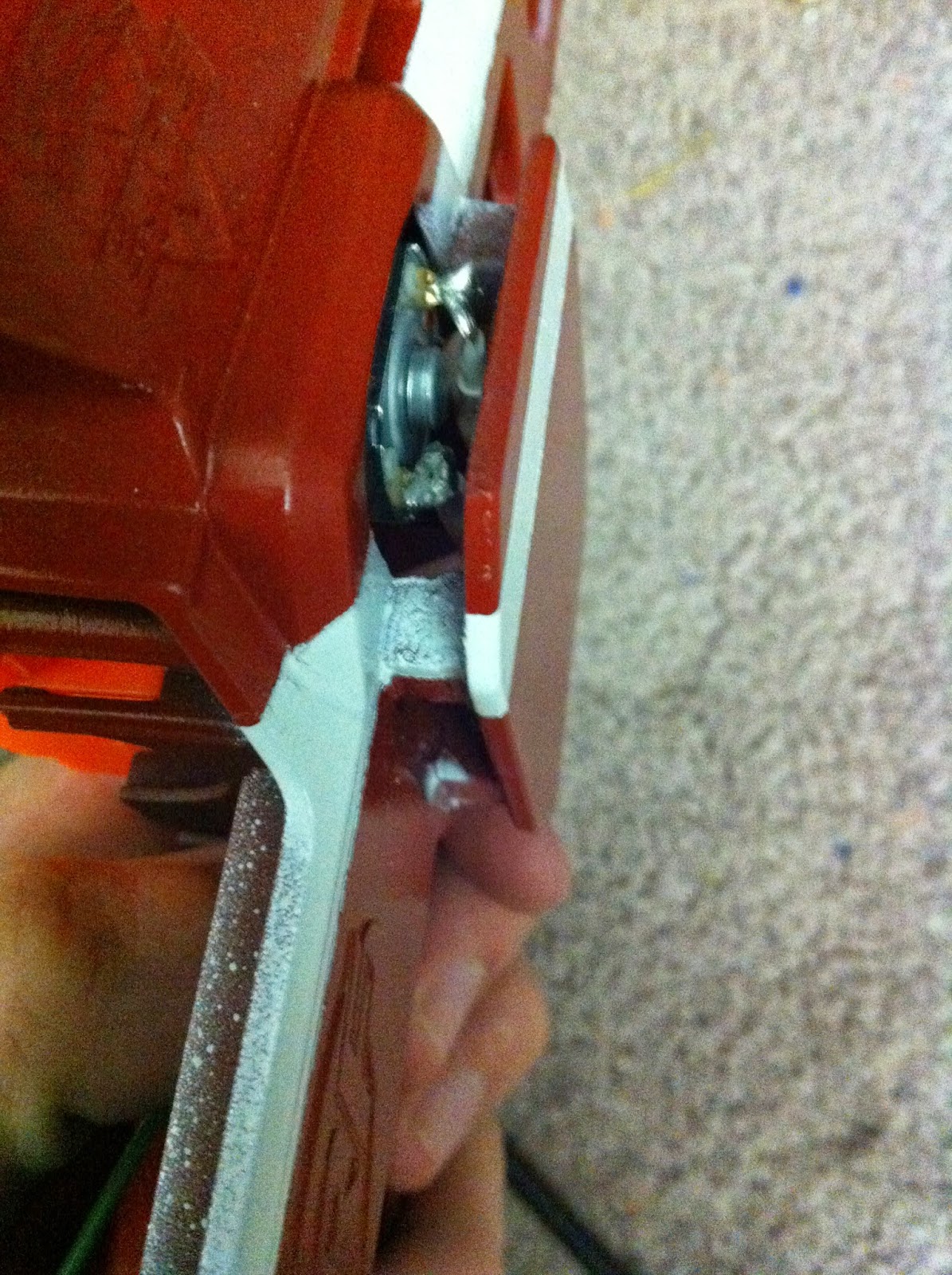 Terminals visible through the endbell cover.

Speaking of terminals, the terminals on FK motors are very fragile and stick out exactly where they are most likely to get whacked. Be very careful of them when installing motors, cover your terminals up as soon as possible after installation, and avoid having to learn the broken terminal lesson for yourself.

Now... this was unplanned.

I got it wired up normally, modded the FCG as in the Standard Rapidstrike guide, and... the pusher took right off at full fuel as soon as I pulled the trigger. No active braking.

It was the cycle control switch, which was physically off-spec somehow (or perhaps it was the follower for the pusher rod being off-spec, in either case this whole gun as it came from the factory was very disappointing, a giant mess of off-spec parts and shoddy workmanship that wouldn't have worked out of the box, thumbs down Hasbro). If I pushed on the switch toward the follower it would brake normally.

Tried to remove the switch and PCB from the clips molded into the FCG shell and... 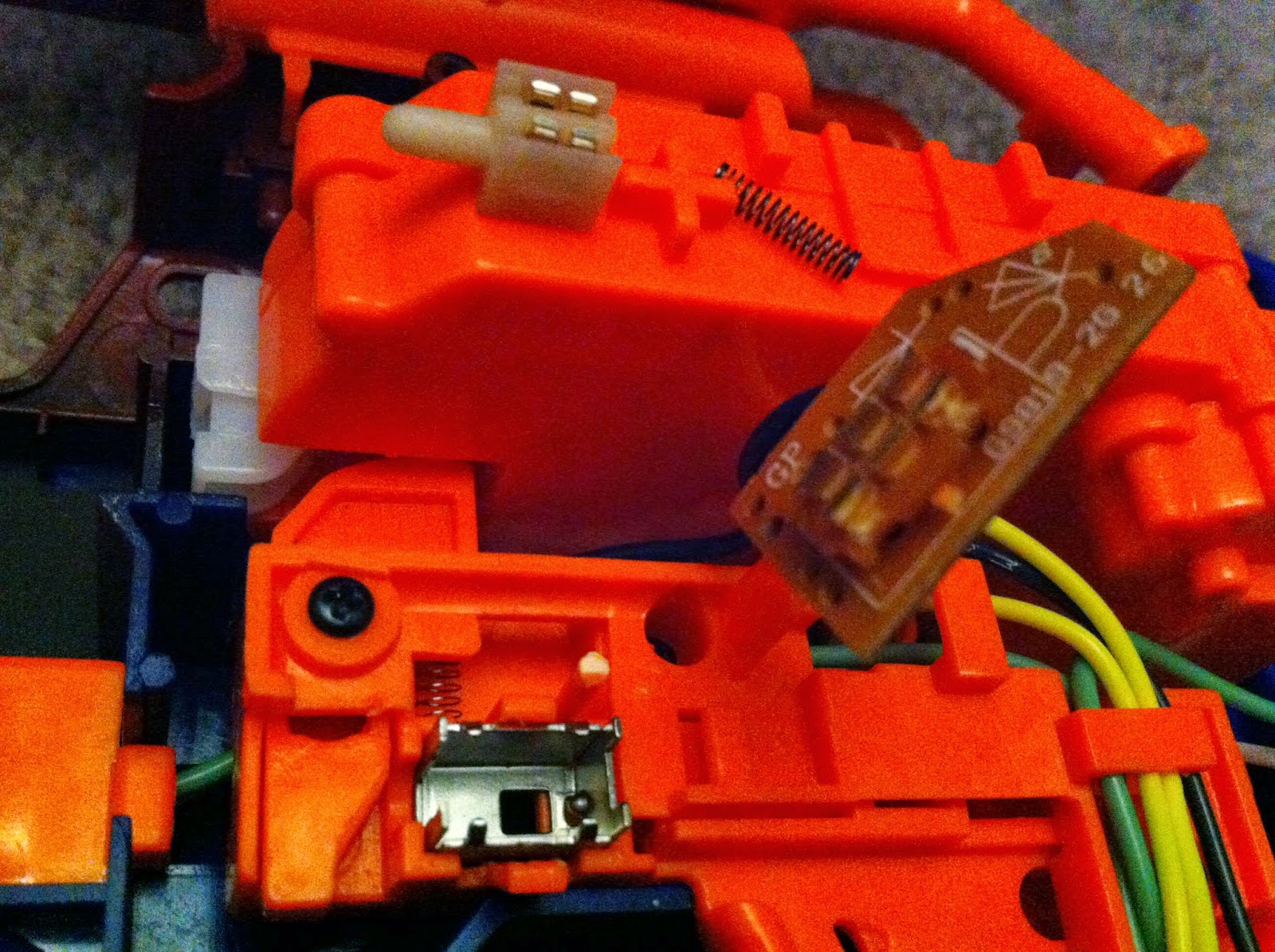 As these ultra-cheap crappy switches love to do, it fell apart and spilled its guts.

You can see how these things work - they are a sort of knife-switch type contact, 3 stamped copper alloy blades with integral terminals mounted into a piece of FR-4, with little copper clips with some kind of coated contact surface that slide along the blades, a nylon carrier with the button integrated, a spring and a steel housing and that's all there is to it. These ones are the DPDT version which in the Standard RS (and stock Stampede, Swarmfire, Vulcan) are paralleled to SPDT for better current handling.

(As a sidenote it is amazing the kind of durability and service these give under our abuse...)

Well I didn't bother reassembling it, troubleshooting it or cleaning it. I was having quality rage by now, I was sick of these cheeseball switches, and I ripped it out. And its twin on the trigger, too. I have long known about UK builders having their 3D printed FCG shell half and a favored model of Omron mini microswitch, but I guess it took a failure to finally make me do something. 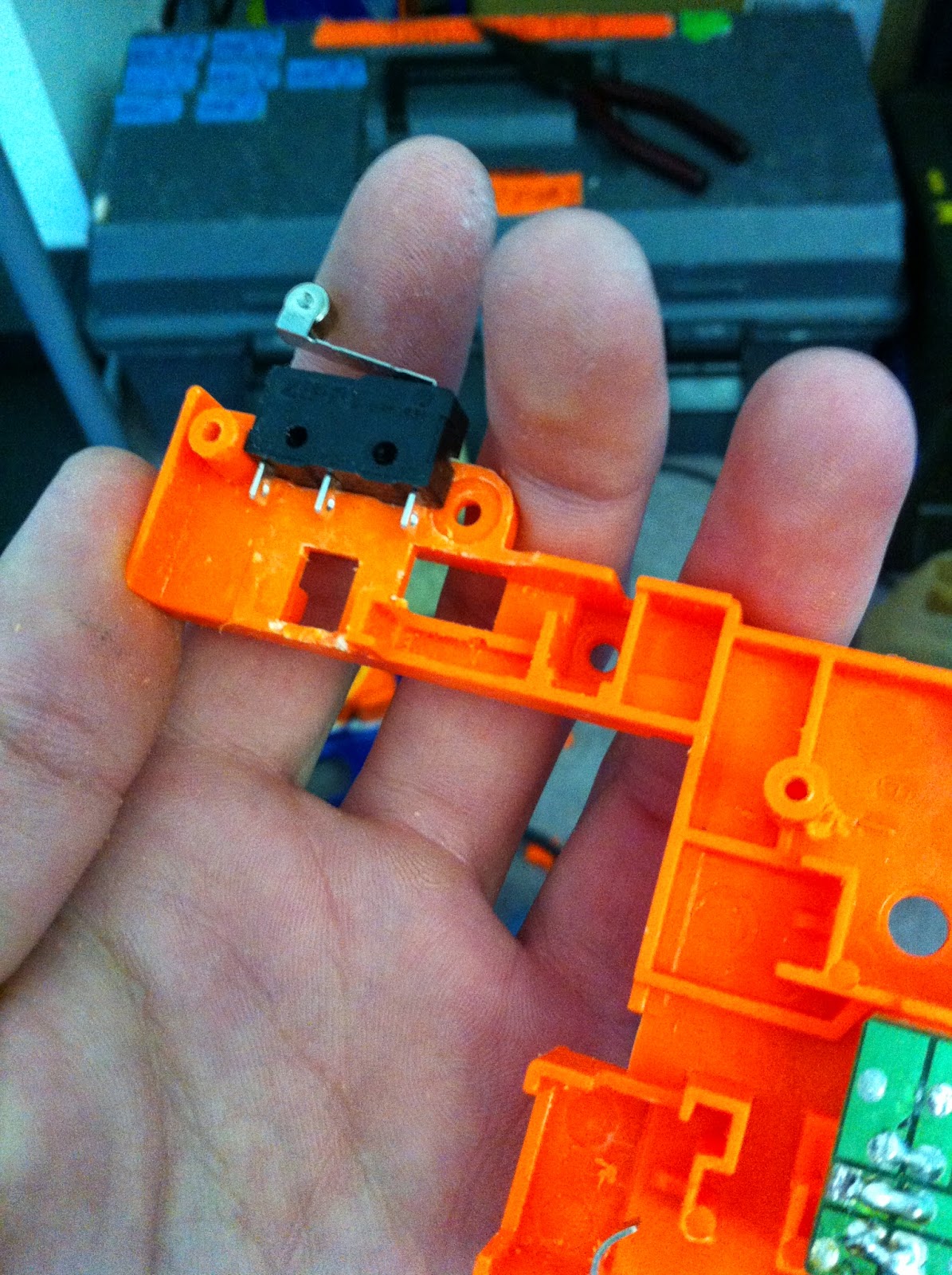 This was all smashed together in an hour. No real fabrication. Just cutting webs and bosses off the stock FCG shell half. It may not be the highest-spec or the first full micro FCG, but at least the stock shell use was proven.

Note that the configuration shown is flawed as the actuator will be caught and smashed by the pusher rod on the return stroke. Thankfully I caught the problem before anything got trashed and modified the actuator. You will see the necessary bend later on. 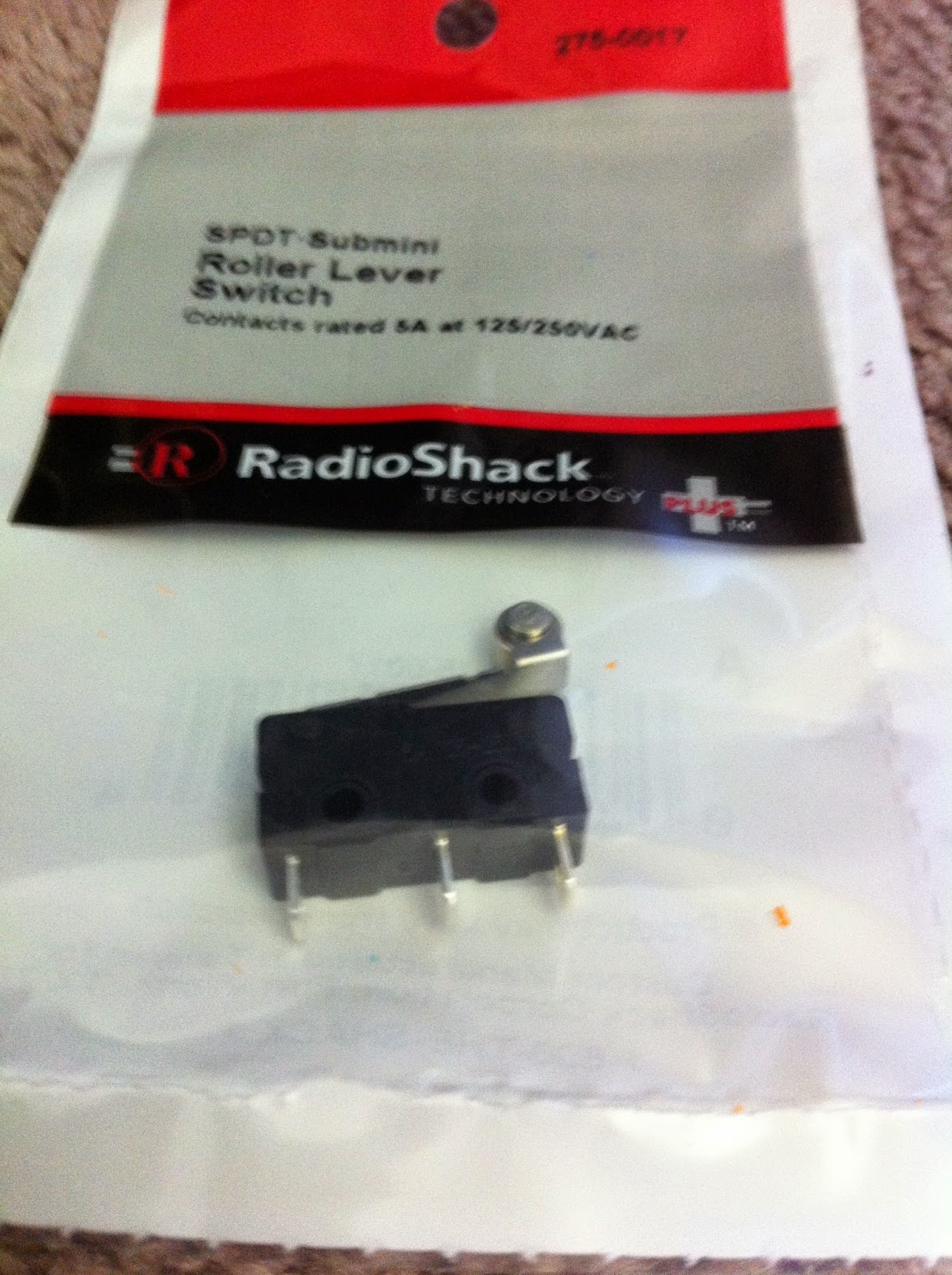 This is the switch I used, which is locally available. This was not planned for. There are superior switches to this part at a superior price in the same form factor, such as those Omron units the UK community uses.


This is the completed FCG minus the left shell half. You can see the CC switch modified actuator to work with the stock pusher rod. Also the trigger has been fitted with the same switch. The rev switch (green) is a full-size for comparison. 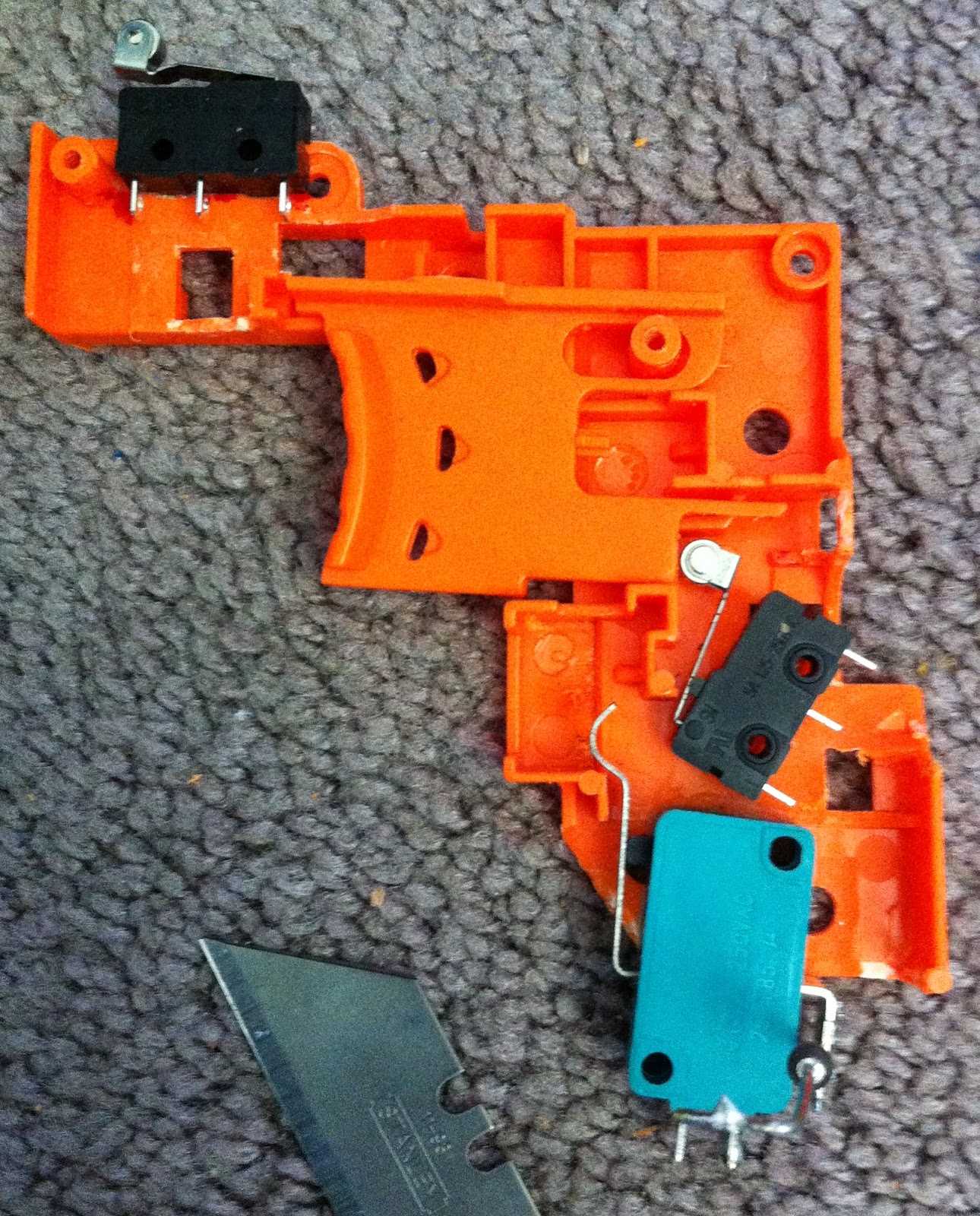 Of course, the timing can be adjusted at build time as it was here, and if I was going to take the time on one of these conversions, it would be adjustable later by loosening 2 screws, but this one works for now with the switches glued down. I will save the optimization for when I have the proper switches.

And with that out of the way and the pusher eager to spam some darts (but only some darts, down to and including one), it's finished. 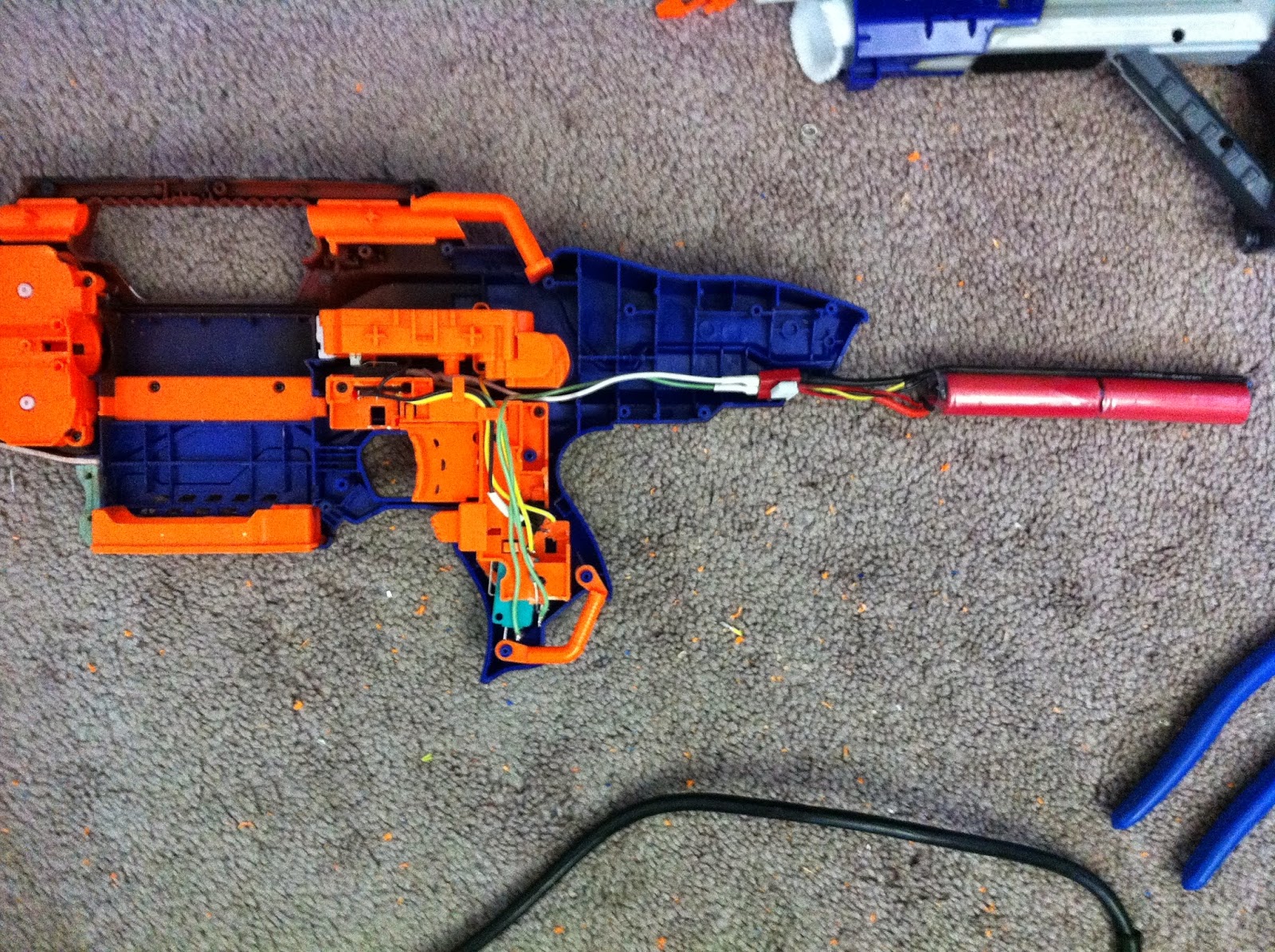 After putting the battery in this stock (which is the one you have seen before), it is ready to close.

There is, by the way, a single 1N5551 diode feeding the pusher power lead to clean up some nagging stability problems with the FK pusher/2S combo. Obviously, when a 3S battery is fitted, more diodes will be inserted there. 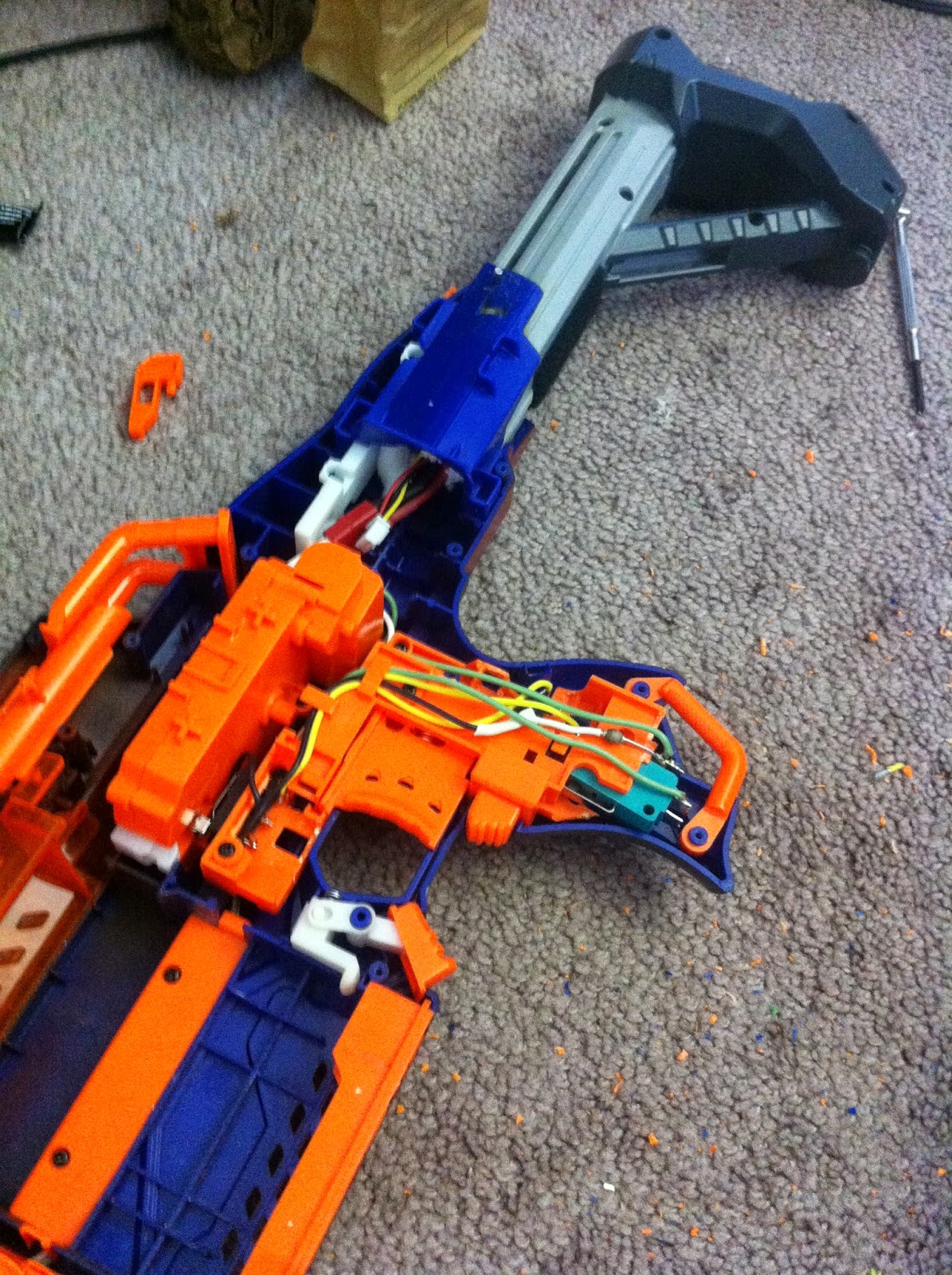 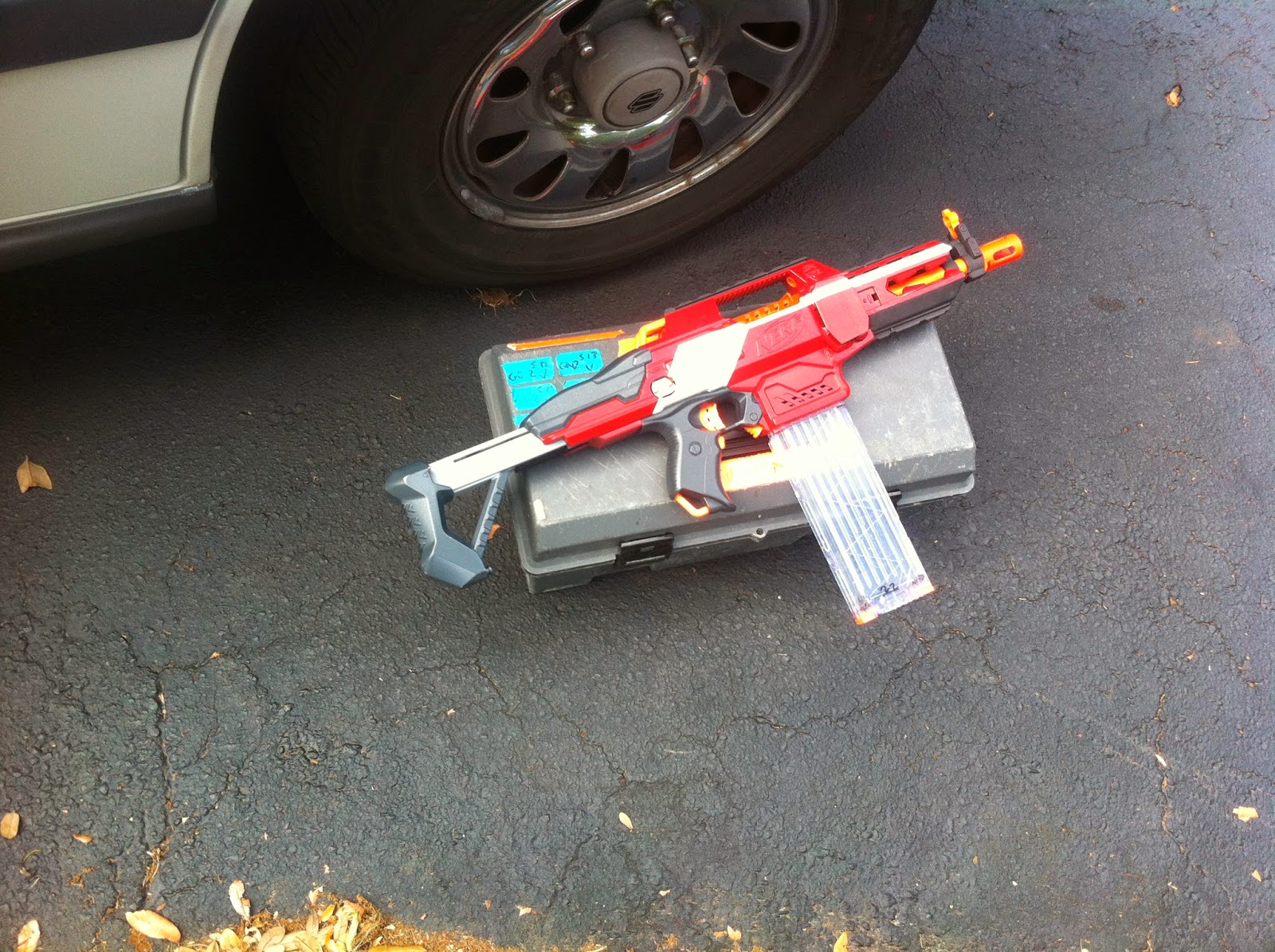 Only needs that pusher motor cover.