I have been on the usual routine of trolling around local stores looking for trouble in the sporting goods section, but the reason for lack of Shelf Watch posts has been lack of activity.

This time, I was really looking for something to post, so I checked out a Kmart in Gainesville Florida that I rarely visit and found some odd items in stock. 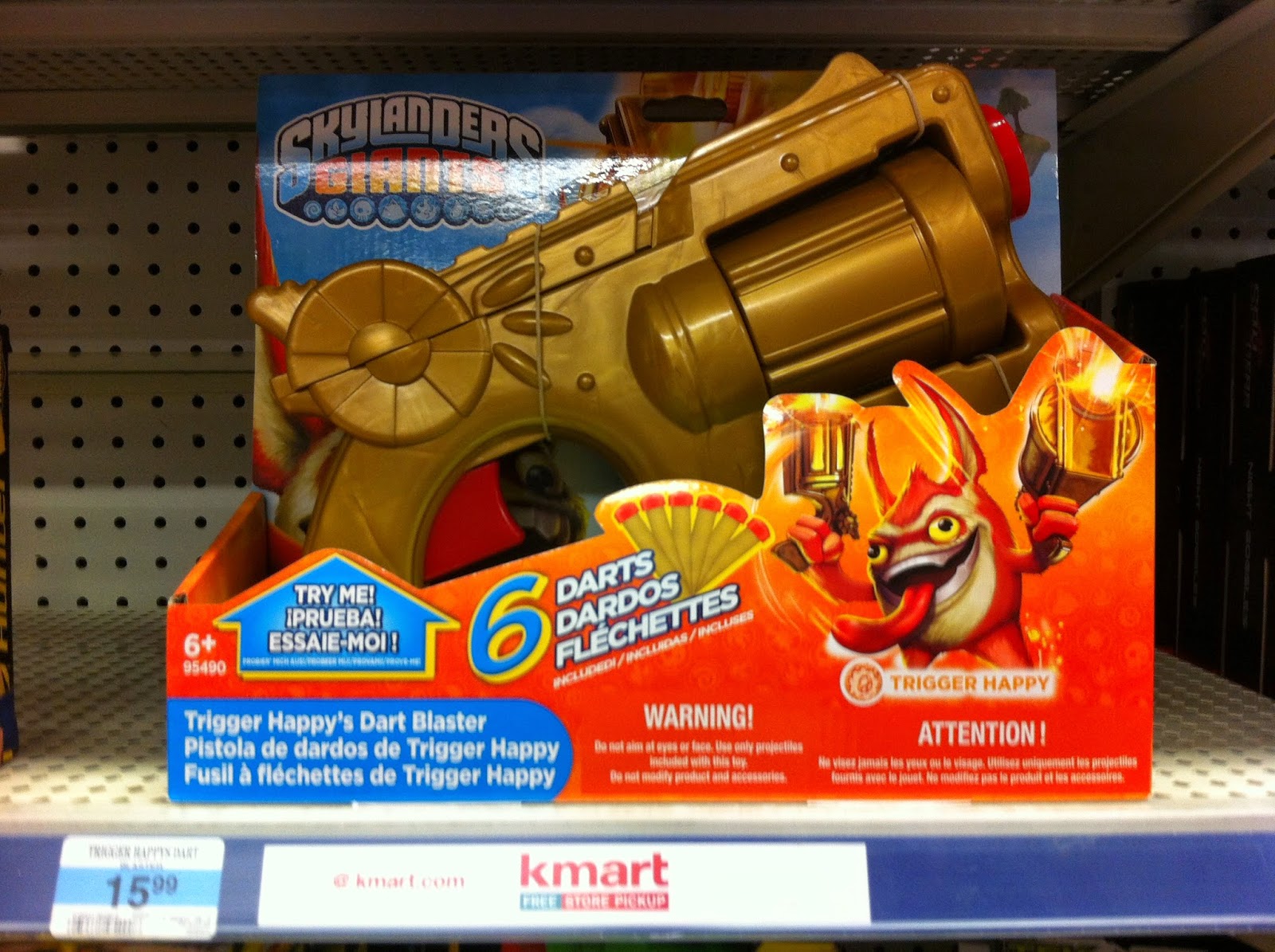 Haven't seen these Skylanders promo guns around before...

They rotate on the trigger pull with the distinctive half-step action of a Maverick rotation system. Pass! 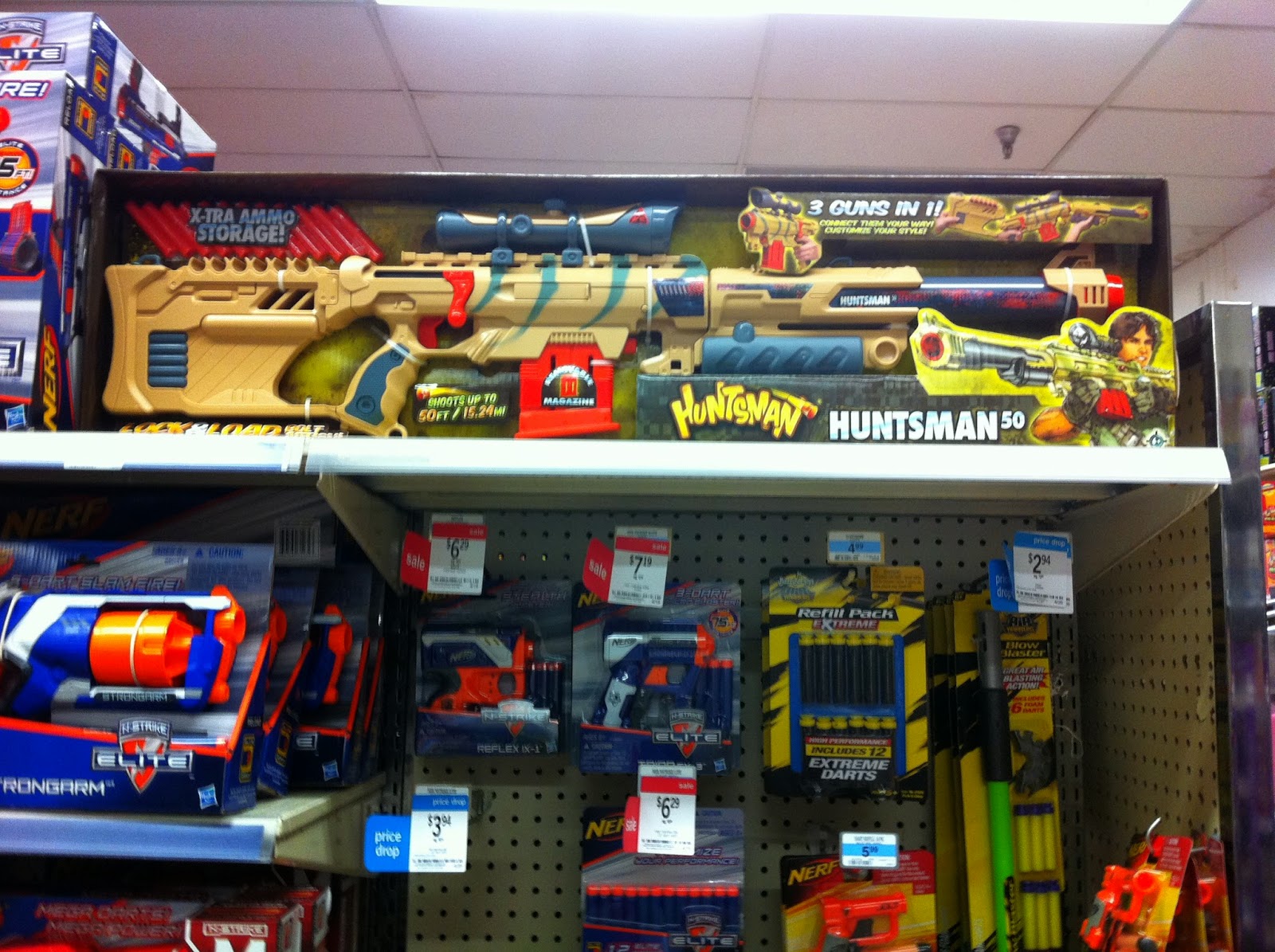 Lanard Huntsman 50. If I had cash to burn I would have bagged one. I want to test and mod it as there is a shortage of said info.

I admire this gun as a product. It's still pretty toyish in the design quality and safety is obviously done justice as it should be with bright colors in due places, but there is something about this gun's overall no-BS, no-PC approach and vibe that I really think is missing from the nerf industry and even the NIC. Slightly milsim paintjob, firearms references, and a line called Huntsman... Cool. Also note that Lanard called a magazine a magazine, too, and "bolt action" is actually bolt action and not Buzzbee's idea of awkwardly pumping a multi-stroke pneumatic with the bolt. 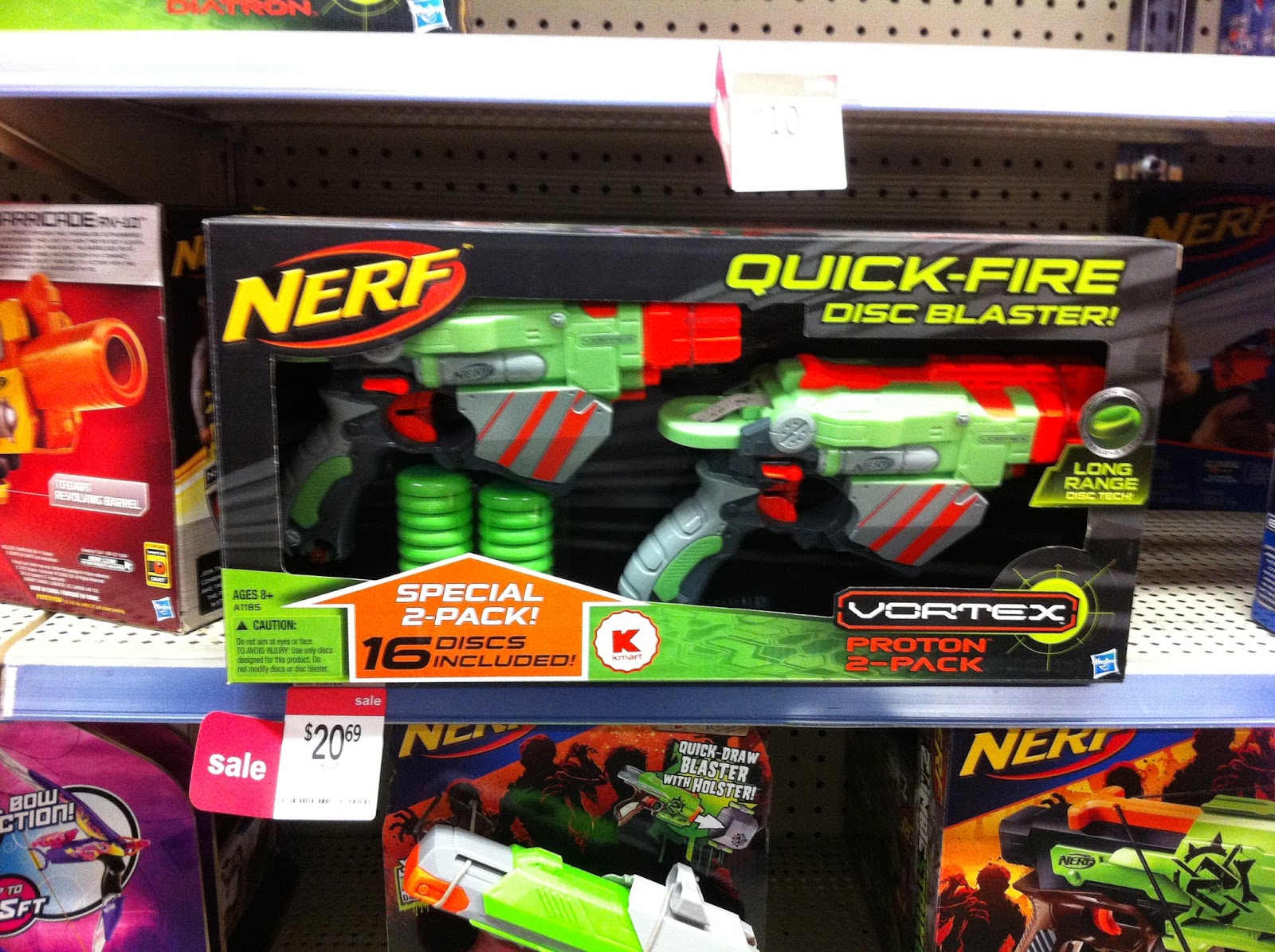 Kmart exclusive (at least in the US) Proton 2 pack. Old scheme. May be NOS. 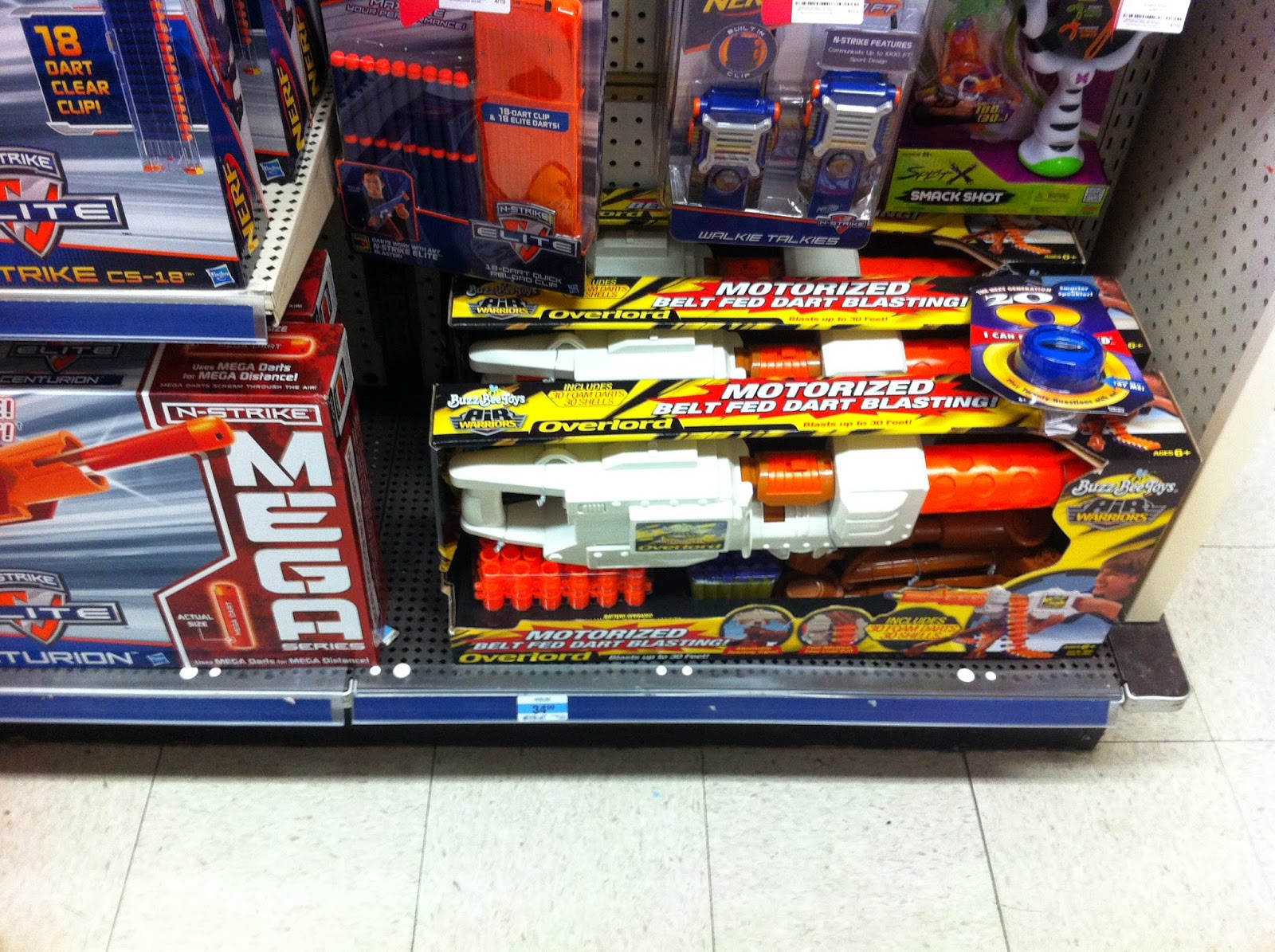 Buzzbee Overlord which has been notably absent elsewhere recently. Whether this gun is in production is questionable. This store had obvious NOS product stacked up and doesn't seem to move product very fast at all. 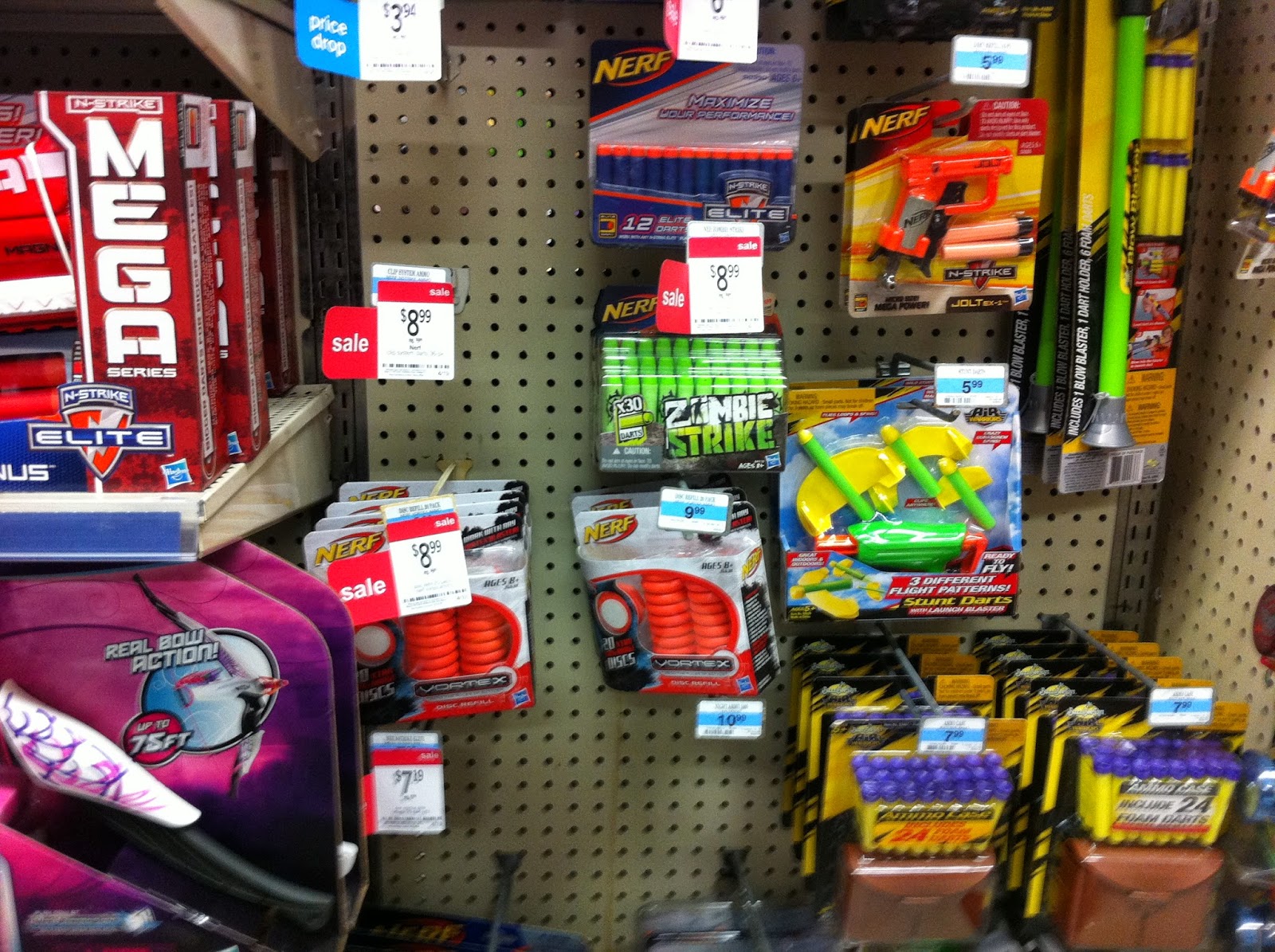 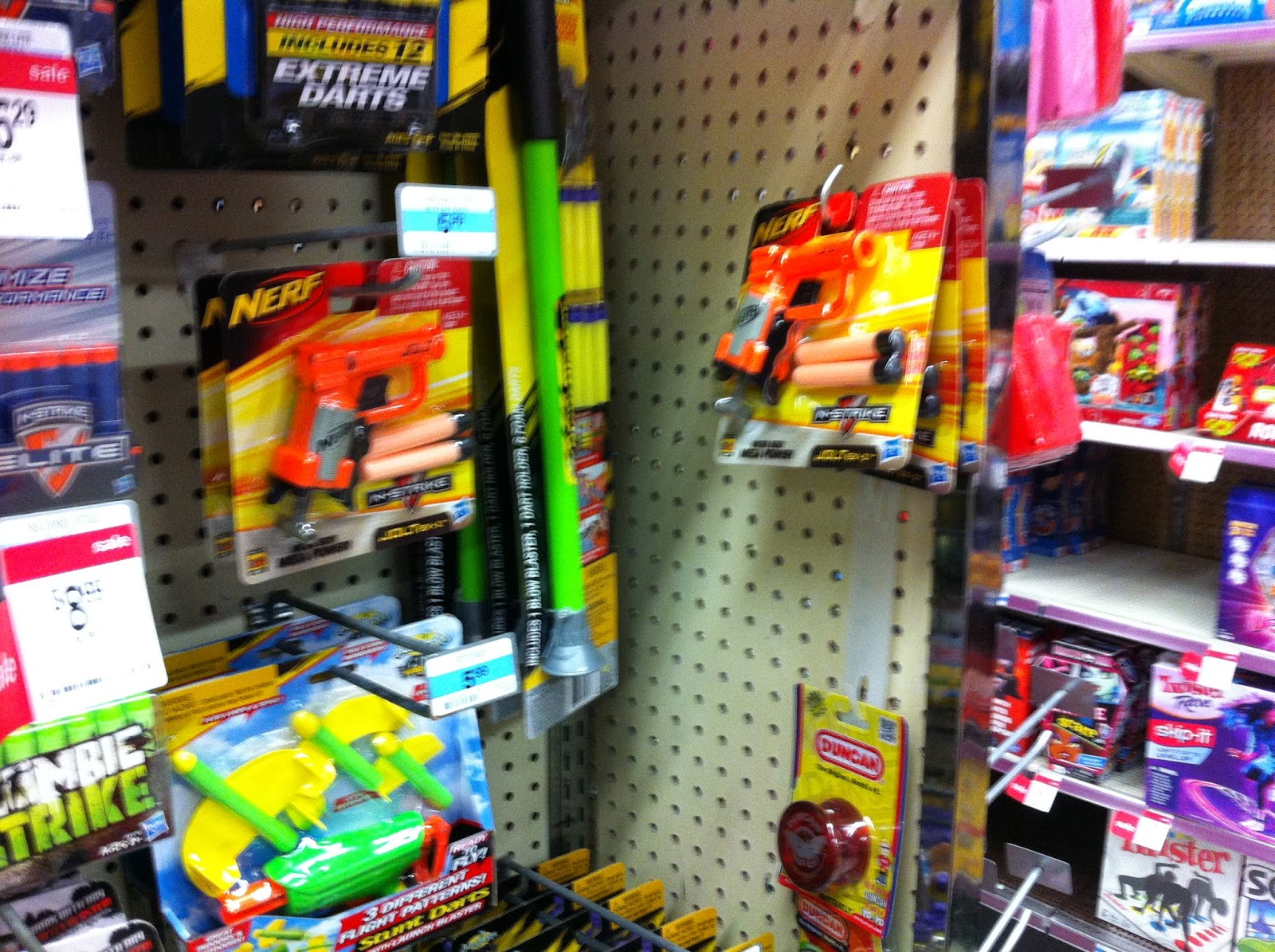 Curveball: Pre-Elite era Jolts. NOS. This is strangely enough the store where I first found Jolts locally in 2011.

Odd observation: The shelf/hanger tags for the Elite mag pack had something about the old Flip Clip kit in the description. Kmart reuses tags, shelf space and probably item numbers, perhaps. 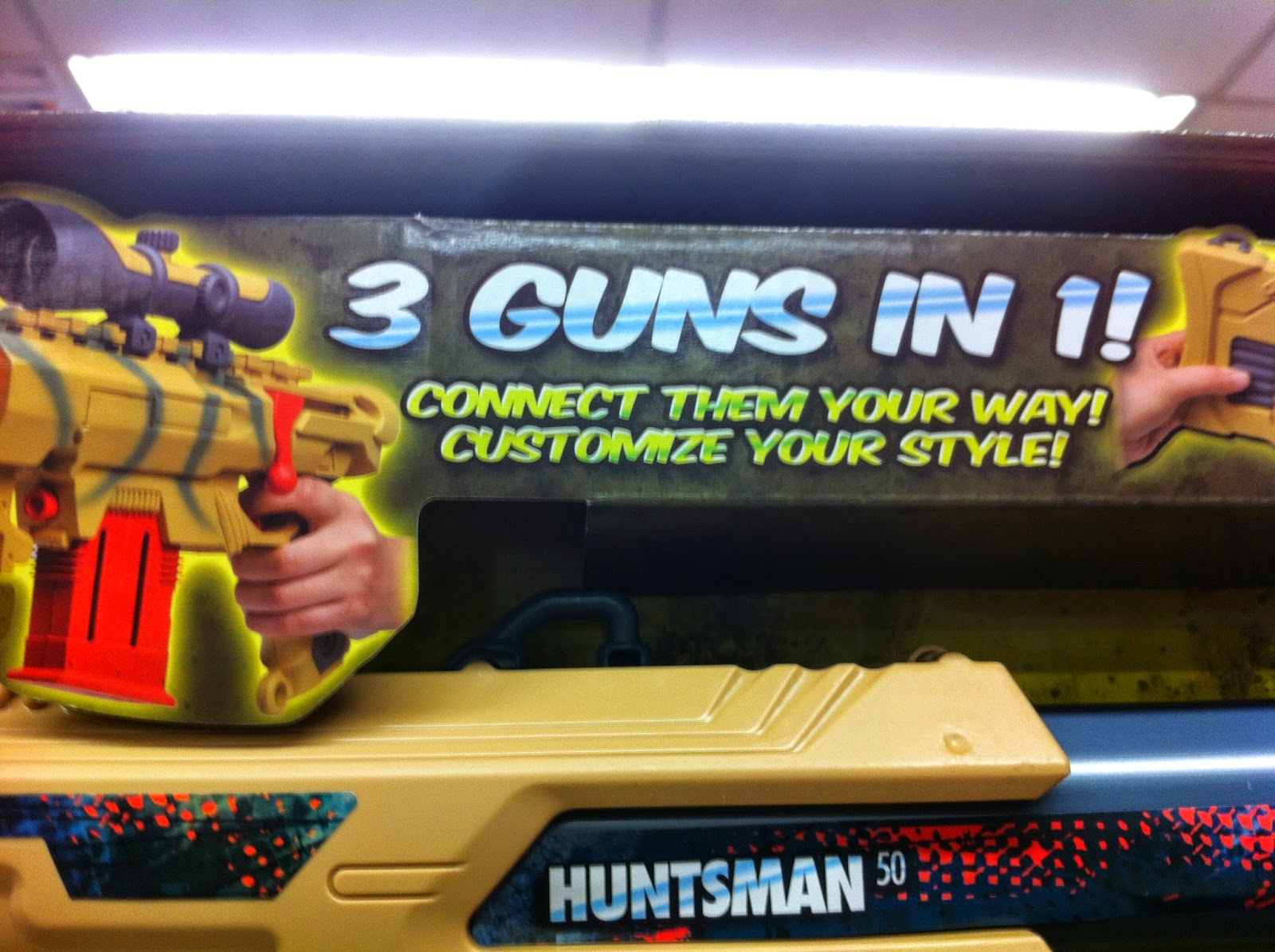 Back to the Huntsman 50, closeup of non-use of "blaster". They call a gun a gun! Not too common in this age of endless political correctness. A big thumbs up from me, Lanard! 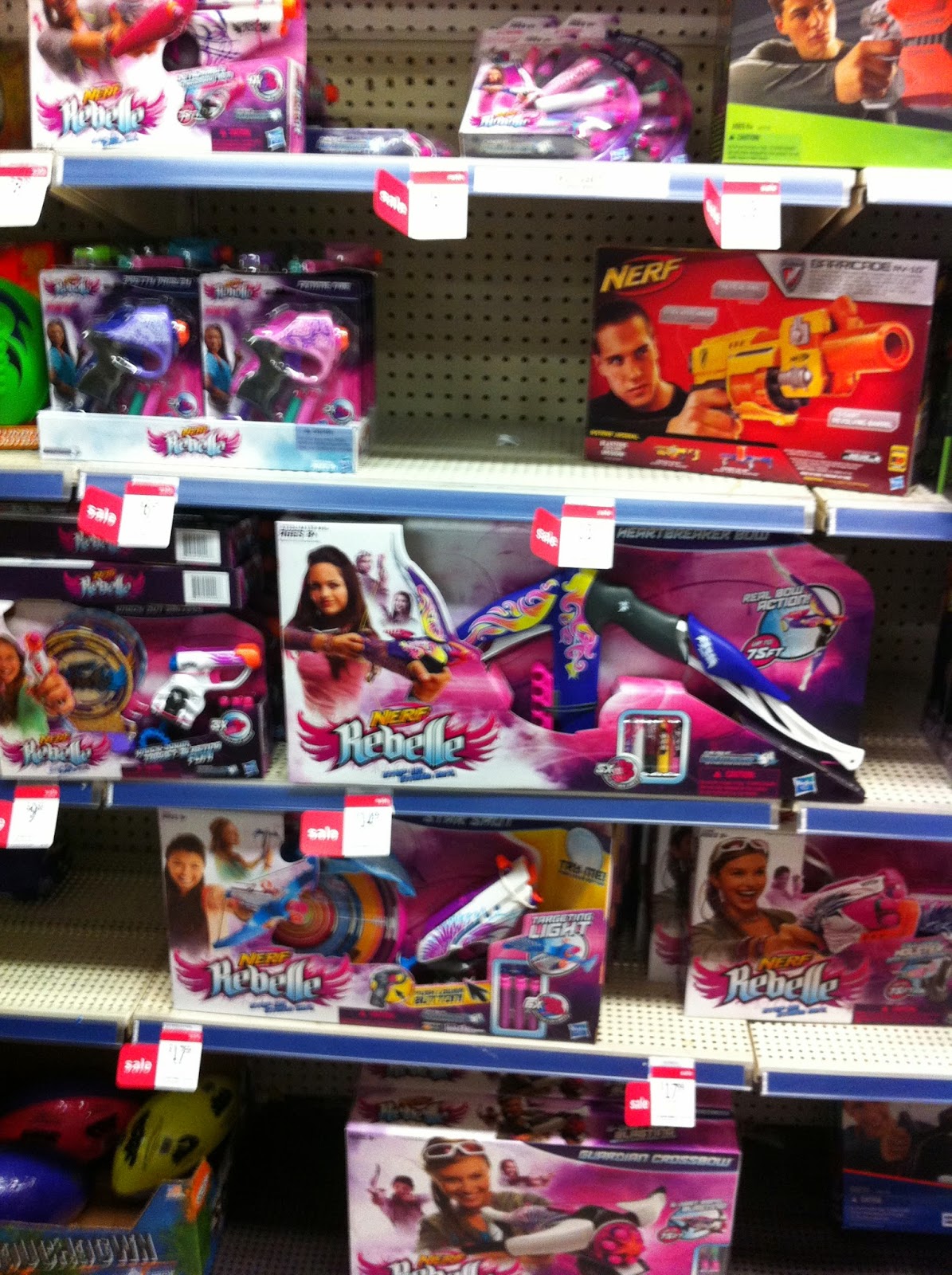 A full complement of Rebelle stuff. That HBB is not the original scheme. I don't follow Rebelle so I don't know anything about the history of HBB paint schemes. 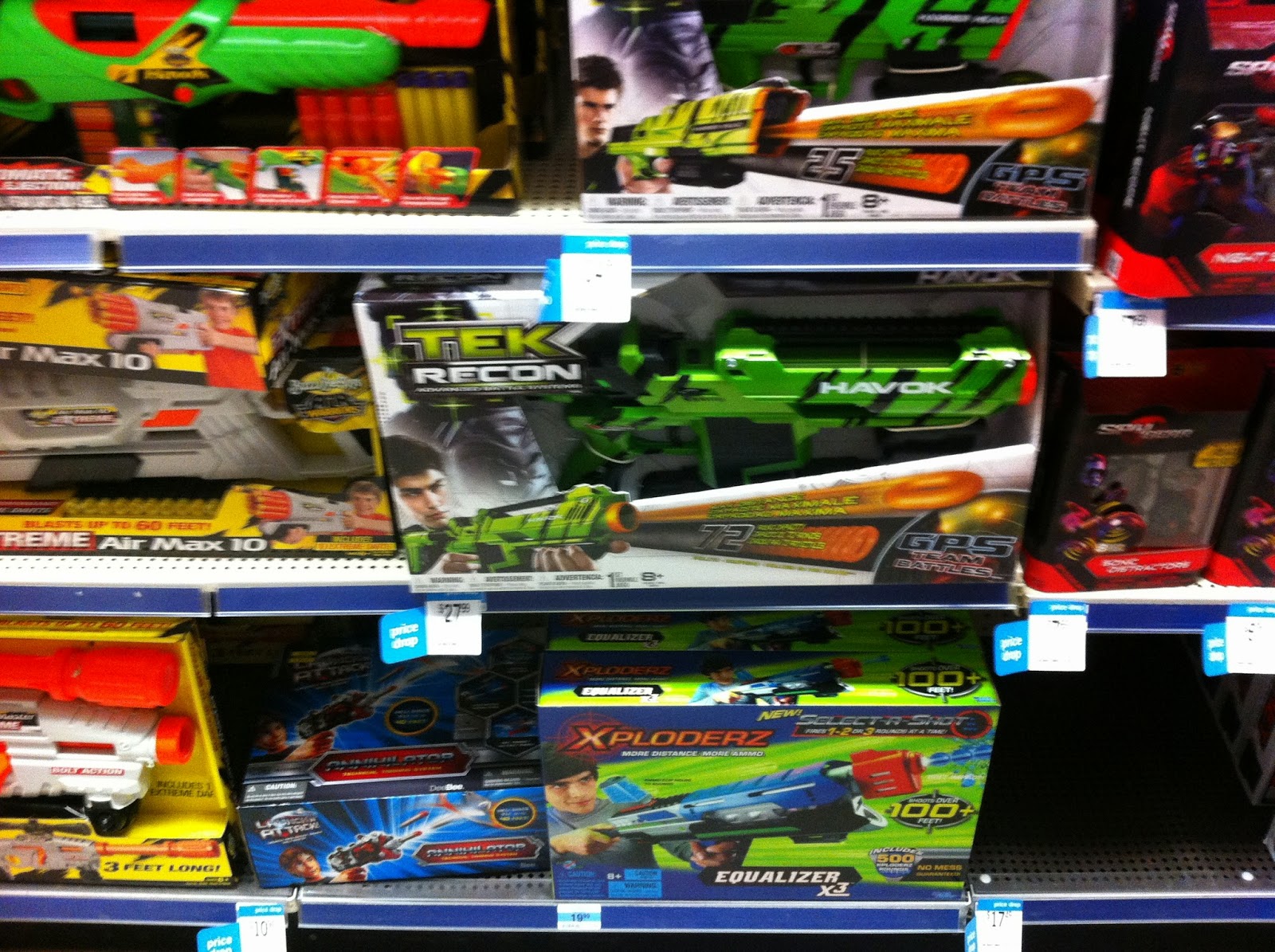 Tek Recon in the wild. This is one of TWO sightings of TR by me... ever. One in a Walmart in Orlando. One here. Havok... 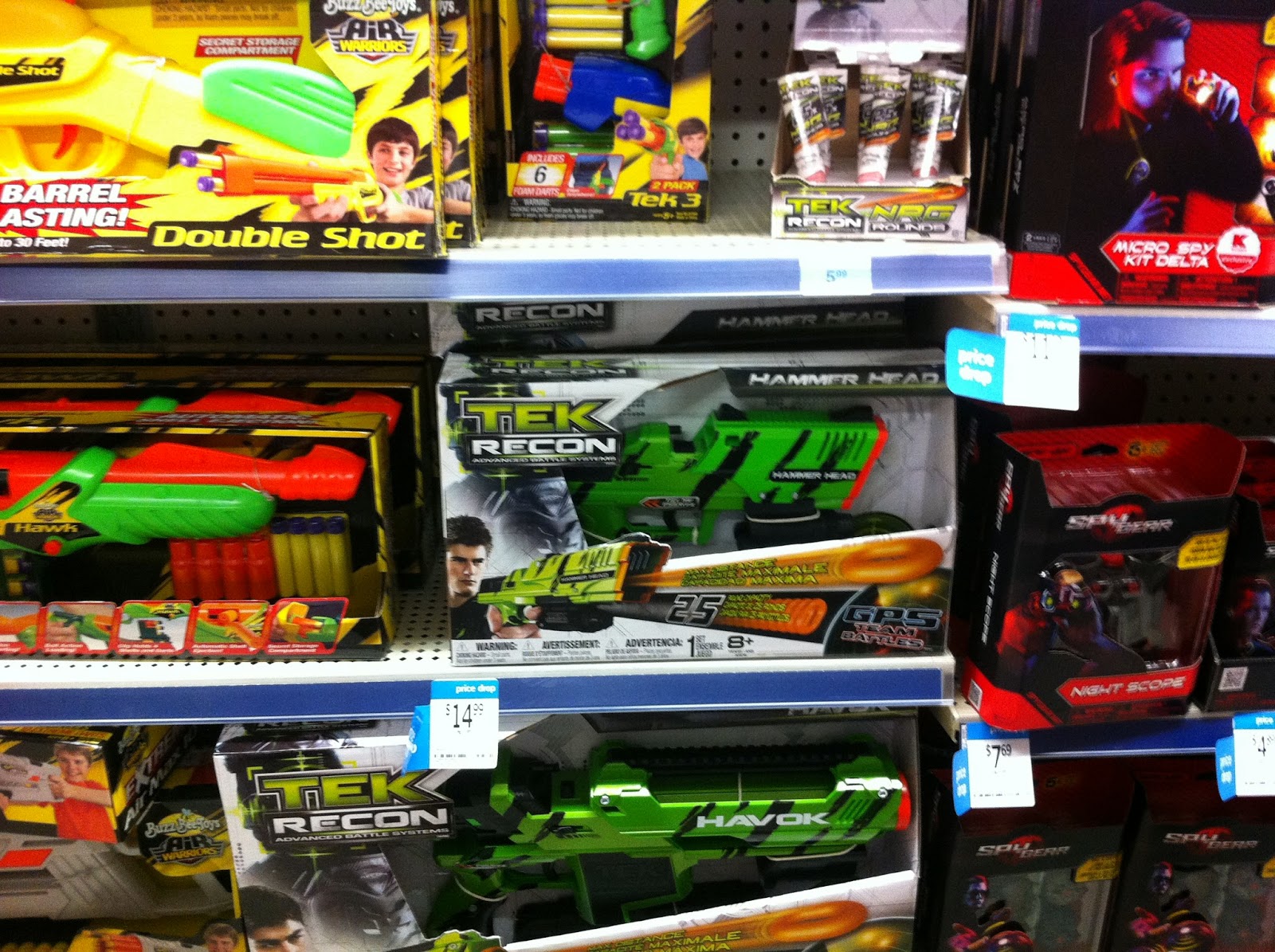 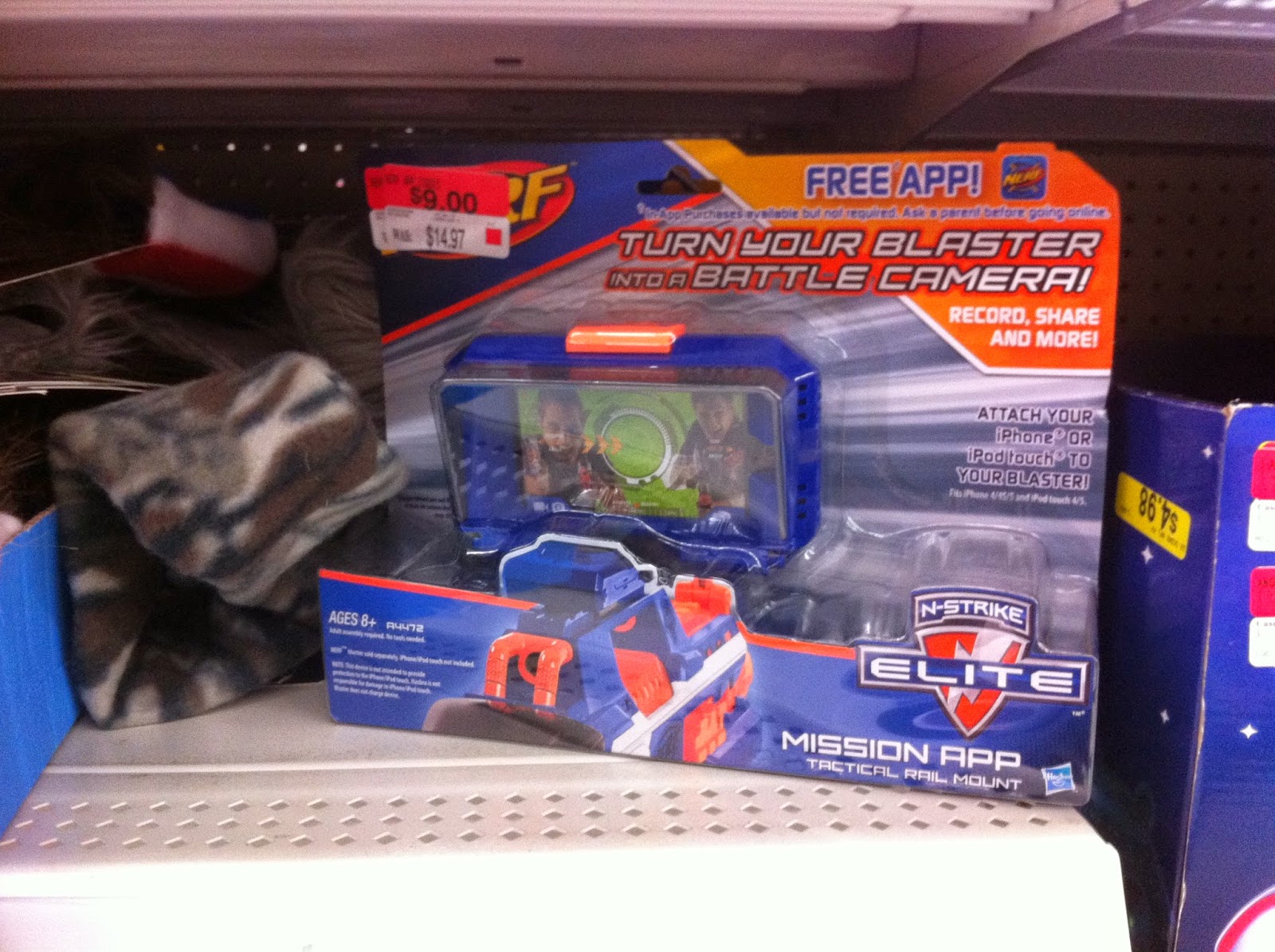 Nerf phone mounts on clearance for $5. I am still unclear on the images of an updated (more compatible?) replacement for this design. Have only seen the above product in stores to date. 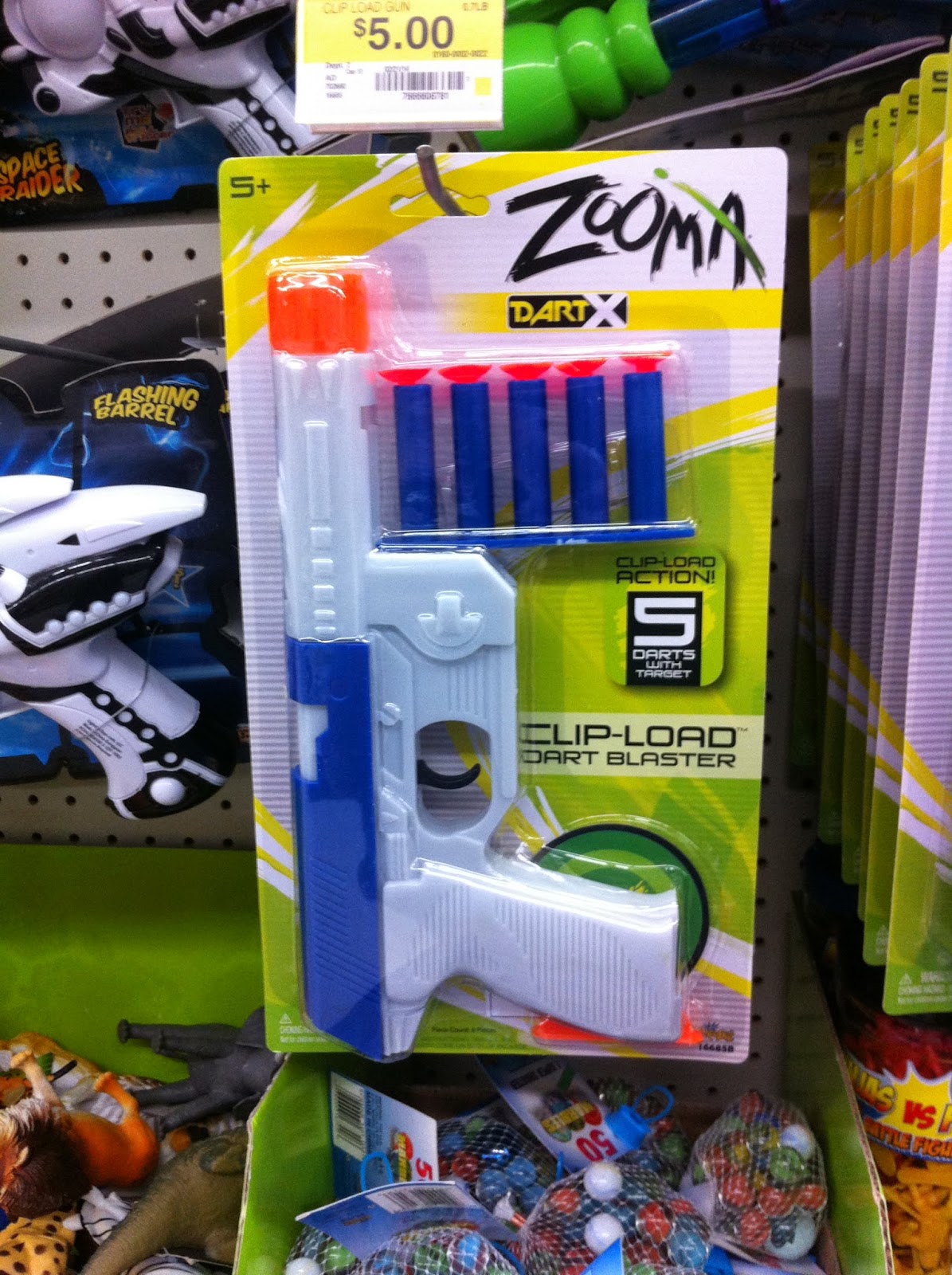 Random: Zooma DartX Clip-Load Dart Blaster. A clip-fed (clip being correct usage) example of a "classic dart gun" using those old-style rubber darts with a thin body and a suction cup on the tip, sort of like an oversized foam-less Streamline tip. Most likely a direct spring launcher. These preceded nerf, foam-body darts, and spring-piston airguns used to launch darts, but fell out of favor, I guess. Probably due to subpar performance potential. 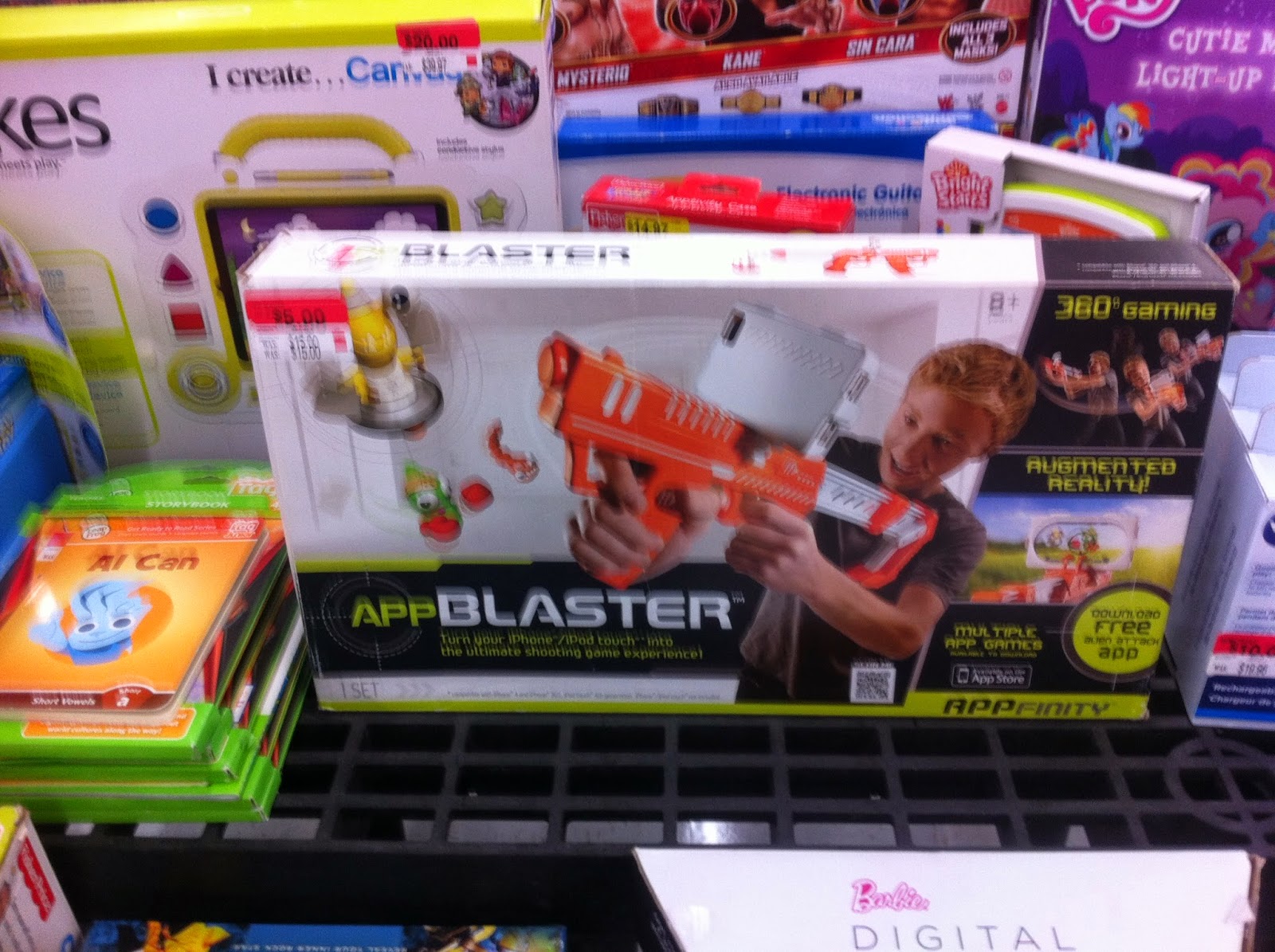 App Blaster on clearance. Haven't heard much about it, and it's not a nerf gun, but figured I would post the sighting. I only saw one.

BTW, speaking of clearance, I haven't seen JT Splatmaster products in a Walmart or any other store for quite some time. I found my Z90 in the clearance section of a Walmart and my Z100 online. It seems the original big bad box store is rather aggressive about what nerfy-things they stock and which ones they pull and dump the remains in clearance.


And shifting again, now we are in the familiar Butler Plaza Target in Gainesville, where many a dart destined for a UF zombie was sold. 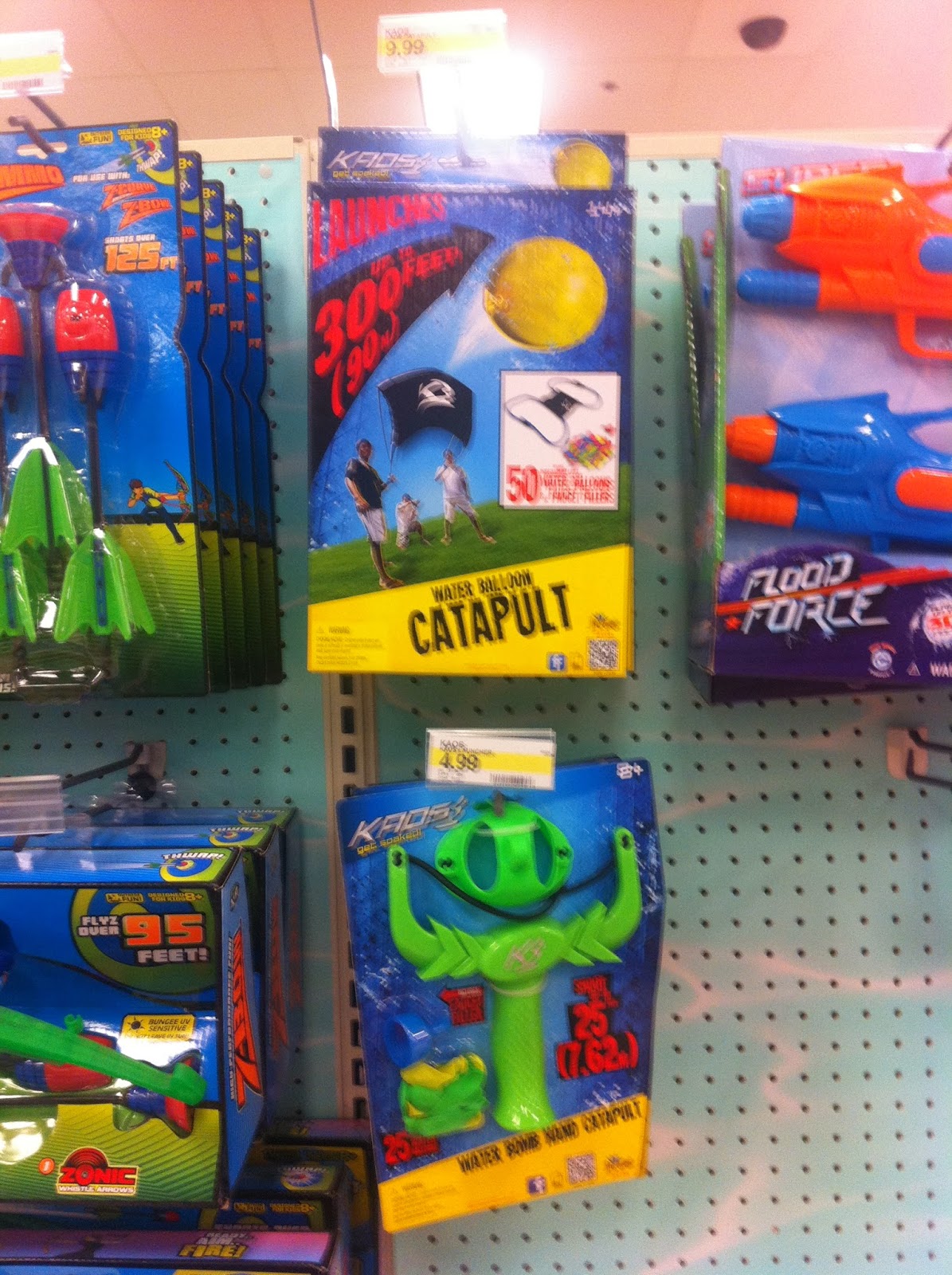 This is similar to a homebrew special zombie weapon in the last Gators HvZ game which was used to fire lethal socks at humans. It caused my death in the final mission. If it can launch water balloons, it can launch socks... just an idea to save development time/cost if anyone needs such a device for some gaming purpose. 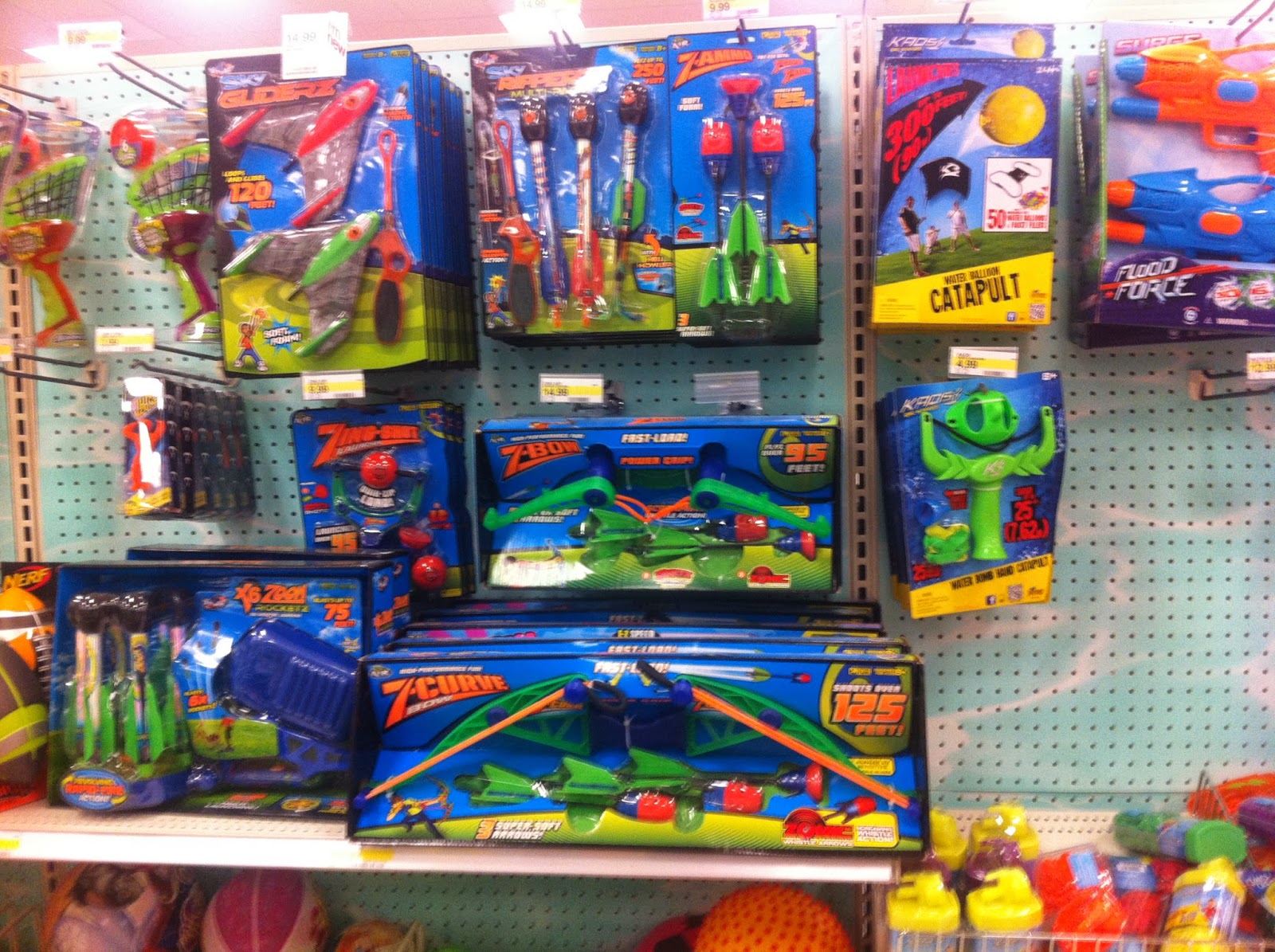 Decent quantity of Zing stuff. Z-Curve Bows are everywhere! I was apparently incorrect in a much earlier Shelf Watch when I wondered if the Z-Curve was getting replaced due to safety or some other reason. The Z-Tek Bow I had caught in that Shelf Watch is now nowhere to be found, and in its place is the Z-Curve. Guess I had them backwards.

You can't see the price tag on that cardpack of Zing arrows but it reads $9.99 or something similar. Ouch! Ammo cost is a major problem with this system. For that amount of cash (with no online purchase, careful shopping, coupons, promotions or sales of any kind) I could have 30 rounds of the best .50 dart you can buy (Nerf ZombieStrike Elite). Who doesn't want to shoot 10+ times as much stuff for the money?

Also, strangely enough, Target stocks the Zing bow products with the soakers one aisle over from the rest of the non-seasonal nerfy stuff. Unless I'm missing something, they don't have anything to do with water or soakers. 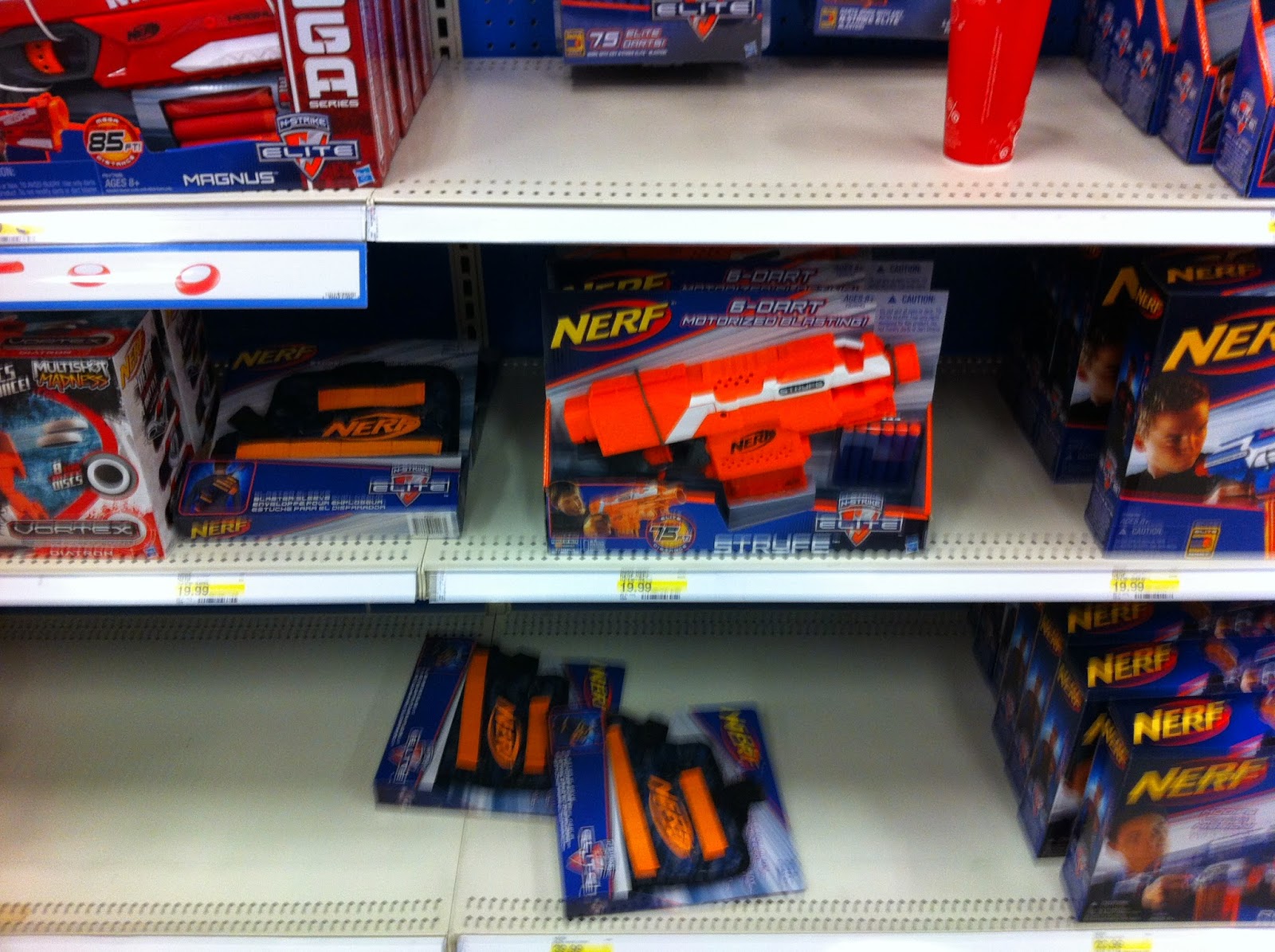 Oh yeah, this is a thing. Saw one being played in the last UF HvZ game. Not all stores have them, and those that move product slower tend to have significant stock of blue scheme Stryfes, but they're out there and with an open pack rather than a box.
Posted by torukmakto4 at 12:05 AM