I was able to attend the last ~2.1 missions worth on Saturday (probably most of the combat in the entire 2.5 day game) - unfortunately not all of it, due to a combination of motherfucking work schedule and motherfucking slow I-4 traffic.

Mission 2 on Saturday was, to be honest, terribly designed. Humans were to move an objective (a giant teddy bear filled with 165 pounds of sand, and I am 100% serious) through 2 pagodas in USF's MLK Plaza and defend it for 10 minutes at each. The large Plaza was an Infested Zone, in which humans were completely disarmed and could NOT defend themselves, only evade zombies. The pagodas were sock-only zones. There were several circles of traffic cones in the plaza which were moved by mods at regular intervals and were armed zones, but only permitted 3 humans to be present. Zombies had spawn points at the edges of the plaza. Clearly, this sort of lazy, heavyhanded and agency-reducing game design, which amounts to not permitting humans to fight at all over a large area and requiring the vast majority of them defending to use a single type of weapon that was in short supply while zombies respawned and respawned and respawned and hammered them, resulted in a shitshow. There is a tremendous amount of discontent in the community about this mission and mods have deleted some threads on the facebrick groups, which is not a good sign at all in itself.

During this I held with the sideline group firing into the plaza from its borders, supporting the interior humans as well as we could. There was a bit of questionable human tactics here. Had I not been there to convince otherwise, everyone may have attempted to run in and join the sock unit or the cone zones, and we may not have had a persistent sideline group. Since the entire plaza disarms humans, the retreat at the end could have been a significant FUBAR without a sideline squad to stun zombies near the exiting human group. I'm not sure if players really comprehended that at any point. Also, one of the most viable tactics was to spawn camp the zombies and stun lock them, since the spawns were in an armed zone. Overall shitty design and poor excuse for a difficult slaughterhouse mission. There is a place for a difficult, casualty-inducing mission in games, but it ought to allow both humans and zombies to actually play the game as intended. That was just a bullshit mission in every way.

To USF mod squad's credit, the final mission was much better and involved defending multiple locations while data was retrieved, then returning the data to our NPC. This was a good hard fight but it was a well designed mission.

So onto the gear observations.

The Model Pandora T19, running 4S closed loop and 11rps ROF, was absolutely rock solid. Zero complaints with it at all. This was my first time running single-trigger control in HvZ, and it was a straight-up improvement under combat conditions, I don't miss manual motor control one bit. Closed breech and stepper direct drive feed reliability is absolute, with perhaps one time where I skipped some steps momentarily and then self-recovered. Velocity and range improvements with this system were also very nice; USF is a very open campus compared to the locations I played long ago, and the game tends toward ranged standoffs under which Hy-Con flywheel systems were excelling at dealing out hits. Hitting harder does also help enforce honesty, more people called their hits when I shot them this time than I have seen in past games running stockoid guns at lower velocity. I have not had any complaints from zombies about pain yet despite the high velocity and occasional engagement up close. Ammo use when engaging at range and overall is significantly reduced as well with the accuracy improvements; I was finding myself doing about half a mag per charge.

Waffle tip and generic Accustrike were the darts that proved themselves. I still prefer waffle outdoors at long range, since Accustrike is a bit more droppy. However, Accustrike is consistently grouping very well and its range is nothing to sneeze at either. In TBNC 5 the following day at USF BSN building, I had received my accustrikes from the TBNC group dart order of about 23,000 rounds and was running mostly those, which were able to nail lots of difficult shots on mostly-hidden players.

I brought one mag of Mengun darts to a mission for evaluation, since I have a large old stock of them that I have been saving. Unfortunately, these didn't hit shit at the 180+ fps the Hy-Con can put them up to; they behaved like streamlines and attempting to engage at ranges where waffle could basically point-and-click a zombie's headband down was just downright hopeless and hilarious; a sideways tornado of entropy going everywhere but the zombie who is now laughing at me. That is unfortunate, as Mengun has had a very low tip loss rate, good velocity retention, excellent flywheelability, and great foam and is also barrel-compatible to some extent. This isn't unexpected though that as velocity keeps climbing that ammo changes are going to be necessary and older darts are going to become inadequate just like koosh did around the 150fps high-crush SSS era.

One of my early adopters of Hy-Con, UF HvZ's Matthew Bregg, attended the game. Check out his blaster build Yellow Submarine sometime; it's a Swarmfire shell containing a Rapidstrike gearbox, a Hy-Con cage package with 20A Afros and an arduino doing some cool pusher motor/gearbox protection and select-fire stuff. 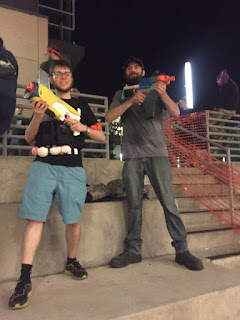 He was running a Protocage a while back and recently upgraded to a Beta Prime and Gen3 wheels, solving those waffle jams that the old non-groove-filler cages had. This was great to see the Hy-Con used by another player and to have 2 of them on the same field. Pretty cool to hear V-Specs firing up on SimonK and the snapping of darts going through coming from elsewhere in the formation.

He also gave me some newer red tip/black foam brick tip darts to try. I meant to get detailed observations but instead I wound up railing on zombies with them. So... Thank you for the stuns. They did well, comparable to waffle or maybe better, so I purchased a case and have been running sample mags time to time. Next TBNC field game will be the true test, but I am considering both them and waffle as my go-to range/outdoor dart going forward. Glue is also much better than the brick tips I had long ago, and better than waffle and accustrike clones these days too. Of note is that the brick tip design is unexpectedly flywheelable despite its apparent structural rigidity in the radial direction - when playing with a cage I was building rolling some darts through by hand it was clear that the horizontal layers actually get folded forward and inward while entering wheel contact, and that most likely happens in real time as well. The bricks have been shooting smoother and quieter than waffle on my Hy-Cons.

Unfortunate casualty of the weekend was one of my Worker 22 rounders, which seems to have been stomped on HARD in the chaos of the final mission's last objective.

I'm not sure if that can be repaired, it's smashed the fuck up and might be totaled. Probably just some bad luck, I have actually threw fewer mags to the ground lately than I used to notoriously do. Oh well, it's just a mag. Speaking of Worker 22 rounders, I am very satisfied with these. Absolutely recommended, 22 is a great number and I have had excellent reliability out of them. However, if you are a shorter individual or a chest rig user they are going to be awkwardly long. I'm tall and built just about like a slightly scaled-down Na'vi and I also use only belt rigs for mobility and cooling reasons.

I also did another UGA'14 style "rifle always" run this time around. I brought my WASP and holster to the game, but I never put it on, it was in my backpack the whole time. I never felt like I needed anything beyond the T19 and a few socks in case a Hunter went after me. The following TBNC game I only brought the T19 and my holdout Jolt. The T19 has so far been exactly what I wanted it to be, which was a blaster that can be absolutely trusted.
Posted by torukmakto4 at 1:59 PM