T19 really needed some TLC. Some had already happened, such as the new stock parts, but multiple things had stacked up that needed addressing:

I started on this with the shorty breech and top rails, then the cages, and it ended up becoming a major cleanup and restructuring and a lot of small tweaks to the majority of parts. 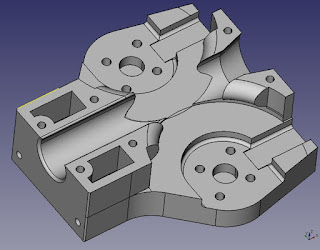 A blank version of the Gamma and Delta mains with all non-motor-relevant features in place have been created, for speedy and easy motor deployment by me, and there is a STEP of each blank for DIY motor options (You will need to design a flywheel and pick or mod the appropriate cover and associated bits).

The new Gamma features truncated groove fillers, as do all the new cages. Trimming nonfunctional regions of the groove filler, especially on the Delta variants, makes getting rotating assemblies in place less fiddly. The crown of the barrel has been radiused on all mains and covers to eliminate swelling of the corner and manual crowning of barrels. All formerly unbroken edges (mostly edges which butt up against another part to form one surface when assembled) that go on the bed when printed have been chamfered with 0.5mm to attempt to eliminate any "elephant foot" burr.

All cages have underbarrel rails as a standard feature. The Deltas have always had an accompanying rail with a nice round transition piece into the magwell front built in. The Gamma has had a rail option for a while too, but I don't think anyone has noticed its presence aside from Junior7 of CFDW who caused its creation.

As to short darts, this occurred. 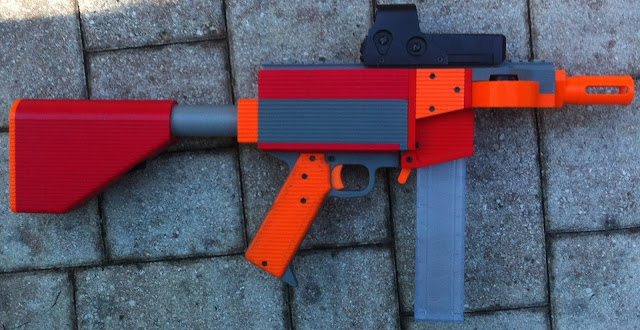 This is an old school fixed speed, delay controlled, full auto only unit that was sitting around. Results were unexpectedly positive with Worker Talonmags. And what a handy sweetie little gun. 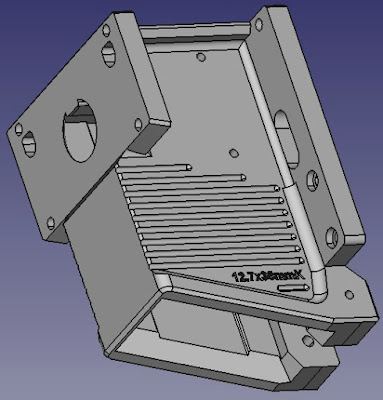 The formerly prototype short dart breech has been adopted effectively as-is as it needed no revisions. Elephant foot prevention has been added, new top rail bolt patterns have been added, and the new stronger 6 bolt breech flange pattern is also supported (note upper bolt holes). The flanges on this newly designed breech have been thickened versus the old full length part. A partial depth counterbore is provided on the lower bolt holes where the bolt head is exposed, for the primary purpose of full depth thread engagement with an off the shelf fastener and secondary purpose of having the bolt heads be less protrusive.

Uses the stock bolt. The fact that the bolt stroke of the stock 19 drivetrain with this puts the bolt tip almost into the flywheels might be a factor in reliability - the bolt occupying the space where a round just was at the top of the mag would help prevent stack tilting, and the excess motion would help to drag the rounds backward on the return stroke and keep dart tips from scrubbing on the front and sticking. So care will be taken if destroking the drivetrain is ever a factor, to see if that in itself raises issues (it is a variable in my last unsuccessful short dart evaluations not with a T19). Any case, combat trials pending, this setup blazes through mags just fine.

The caliber marking was only there originally as an experiment on the prototype short breech to see if I could get text that small and the answer was very much yes. Decided to leave it on because 12.7x36mmK is cooler than nothing or just "short" or something. 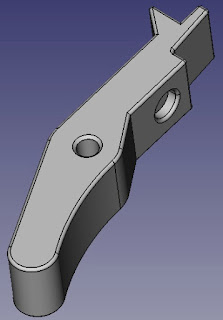 Now is a good time to talk about remaining work to be done. The original full length breech model was lost years ago along with grip baseplate and grip panels and no clean solid models of these damn things actually exist. All of them really, really just need to be binned and redrawn.

However, I slapped a fresh coat of paint on the original style breech (de-elephant-footing, added the extra 2 breech flange bolt holes, chamfered some stuff that was sharp, added fillets to reduce stress concentration some places, added the caliber marking, the new top rail bolt pattern, shaved the uncomfortable bit of the magwell fence on the front of the magwell) and called it good for now. 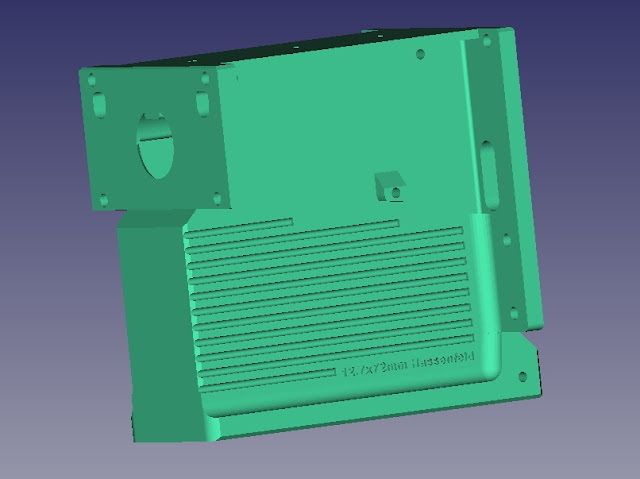 With the grip base, not much reason to redraw it just to get a cleaner solid model, but the grip panels have always been a stopgap anyway and making some nicer smoother rounder grip scales for the 19 frame has always been on the list so there is that.

The drive housing now has the extra 2 breech flange bolt holes seen in the above parts. 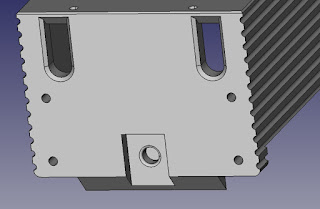 This and the beefing of all new design breech flanges and cage flanges is a preemptive response to the unfortunate Naptown FDL-3 incident, as although T19s were already quite rugged, this particular joint was probably the weakest in the whole system. The extra bolts help spread out the load on the breech flange and give more thread strength in the drive housing. 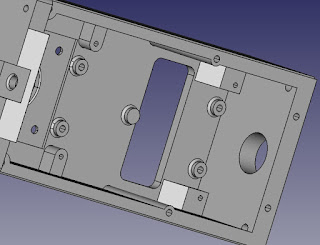 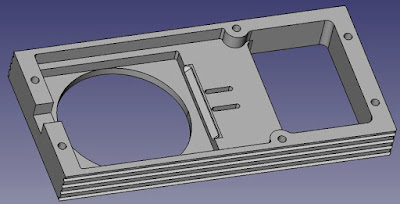 It has also been added to the spacer. Some corners in the spacer internal geometry are radiused. The edge in front of the limit switch has had a large ramp cut into it to address certain roller lever switches with loose levers and a protruding rivet potentially getting hung up, which has resulted in many spacers up till this having this feature ground in by hand when a certain switch was offending in this regard. 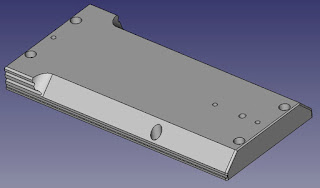 Perhaps the most visible external change of the E1 parts is that the new top cover has continued the "edge milled off at 45 degrees" chamfer motif from the Delta parts. Transitioning from the chamfered edge into stuff that cannot have a big chamfer there (for instance, cage mains, and anything to do with breeches since there are conflicting bolt holes) is inevitably either odd looking or a bit abrupt, but this above approach looks way more natural once assembled than it does just looking at the part. 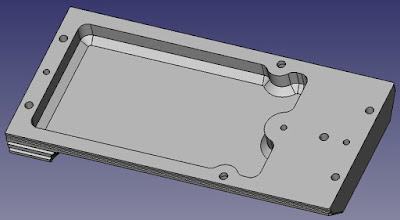 New top rail patterns have been added to the cover. The top of the cover is now slightly thicker. The pocket into the cover forming the bolt rails and crank pin clearance has been smoothed out. The back part where nothing needs to be around the rail bolt holes is left solid all the way through as it is better to infill this with the slicer than cut it out of the model.

Now for the top rails. The original AIM Sports aluminum rails used on early T19 have apparently silently changed sometime between 2017 and now, which I didn't realize (it probably isn't a high velocity item so they would have lingered in the supply chain for years before selling) but in the end, I somehow ended up with a few of the same item that are clearly a slightly different part and have an incompatible bolt pattern. So... To hell with outside vendors for rails. The aluminum rail is nice, but after testing and experimenting with printing rails, that's not a problem. 5 perimeters 100% infill.

There arises a problem from the length of a full length top rail for the Delta cage setups not fitting on most printer beds, and then a further complication is that there are now 2 cages and 2 breeches, and there may be several more cages and several more breeches created in the near future.

Hence, this system. The rail is 2 piece. The front segments are associated with cages, the rear with breeches. This keeps things simple enough to deal with. 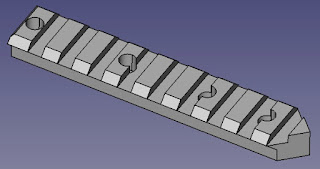 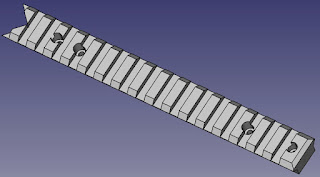 As a final option, there is a one-piece 3 bolt top rail for shorty breech, Gamma cage setups only. (It will also bolt up to a Delta and a shorty breech, since the same front hole is also present in the Delta cage, but isn't full length down the top of the cage, much like Deltas with full length breeches and aluminum rails.)

This rail exists because there are existing guns which may be converted to shorty, which have Gamma cages and bricktop drive covers with only the 2 10-24 threaded holes. This retrofits those setups without changing the cage main or the drive cover. The addition of one more bolt into the breech deals with the flexibility since the rail is polymer instead of aluminum. This rail is also a fine choice for these combos in new build as it removes a part and a joint and a few fasteners versus using the 2 requisite pieces from the 2-piece rail set.

The other setups are just too long to be reasonable to have one-piece top rails for.

Here's a configuration I suspect is going to be very popular among locals for comp and I already like based on my short dart testbed setup's compact size and wieldiness. 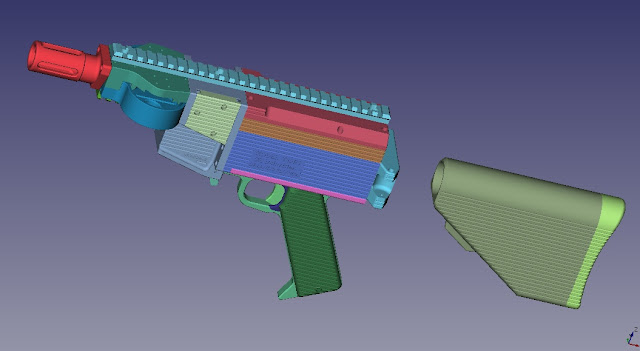 Priorities for the future are to do proper release notes for these parts, an updated build guide, and put up some electronics bundles for sale. (Don't get too excited and don't print preemptively if you know for a fact you can't or won't DIY your control gear and you aren't local to me. I really just can't build everyone a kit. I don't have time or desire to mass produce them.) Overall what this is going toward is leaving T19 in something of a final form for when the inevitable leaned-out vertical slim successor steals all the thunder and the design attention, but that isn't to say I have any intention of sunsetting T19 even then. It has a lot of stuff left to go. Lots of motors to try out, lots of local players to arm, lots of Stryfes, Caliburns and FDLs to eliminate. 2 stage .50 cal cages are coming very soon. Conversion to 20mm Mega is also a plan just for the hell of it.
Posted by torukmakto4 at 11:00 AM