I formally took the data on the Rapidstrike stuff I have done up to this point.

Without further ado, here is the data.

Details and observations after the jump. 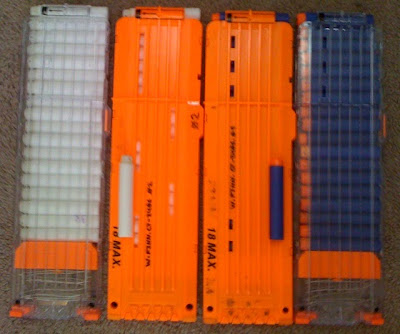 The tests were performed with W-code Firefly (tracer) Streamlines of late production type with Elite foam, Elite darts consisting almost entirely of A-codes received with Rapidstrikes, and 18 round magazines. All darts were in good condition with less than 5 shots on average. Damaged darts were culled before testing. All mags are in spec for feed lip condition. 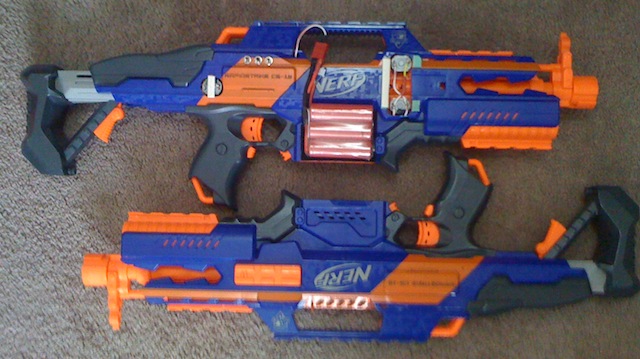 Here are the guns - my development mule (which is still looking a bit Mad Max at the moment while I am away from my stock of PVC and my heat gun) which has Blades and Stryfe flywheels, and the stock test gun - which is bone stock, excepting the rewire. 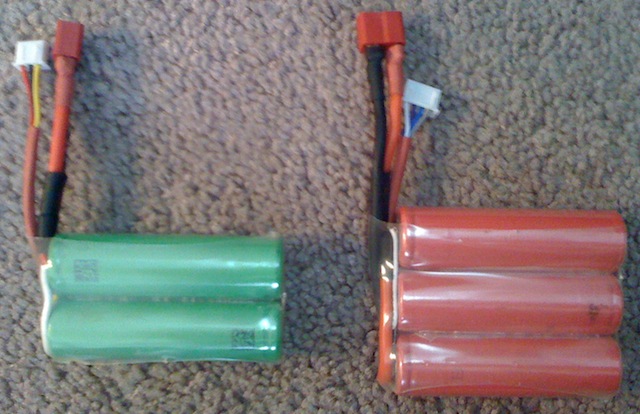 And here are the batteries used in the test. The 2S pack on the left consists of 2 Sony Energy US18650VTC3 cells (1600mAh 19C) and has a nominal voltage of 7.4V. The 3S pack on the right consists of 3 Sanyo UR18650SAX cells (1300mAh 19C) and is nominal 11.1V. Both packs were balance charged with a Turnigy Accucell 6 at 1.1 amps to 4.20V/cell immediately before the test. The packs were not recharged between mags. This test should give excellent comparison to LiPo batteries of equivalent cell counts.

My standard chrono testing practices were used for this test. A Shooting Chrony F1 was used with 2-piece sky screens, no rod extensions, and a 20 watt tungsten halogen light over each sensor. Gross errors, such as shots that visibly passed over the chrono at an angle so as to trip each sensor with a different part of the dart and produce a false velocity measurement, were discarded. Readings that were found to have resulted from a damaged dart (one, in this test) were discarded and the offending dart removed from the test pool.

The rate of hard errors during a typical chrono session is approximately one per magazine and soft errors (readings in the extreme low or high direction from the rest of the data which do not pass the sanity check, and accompany a visibly yawing dart) approximately three per magazine. Such darts during an actual gameplay scenario will either straighten or become unstable; this observation does not correlate directly to a number of fishtails, whirlybirds, or wild shots but gives an indication of the potential to cause such undesired events.

No excessive numbers of such shots occurred with the Blade swap Rapidstrike compared to other spring and flywheel launchers, but the stock unit showed elevated incidence of misfires and unreadable shots. This goes along with an overall observation from this test and general use of these two guns, which is that the stock RS exhibits poor accuracy. This seems to correspond to the stock Rapidstrike flywheels, which are slightly smaller diameter than Stryfe flywheels and have a slightly more pronounced taper. The development mule was equipped with Stryfe flywheels early on due to a quality control problem with the stock flywheel set which caused vibration and noise. This seems to be confirmed as a positive change in the performance of the gun as a whole. Practical testing confirms that accuracy and consistency increase substantially.


In conclusion, the results are solid all around. Even stock motors can shoot decently - but there are definite problems with the stock flywheels. Furthermore, it really is true that Blade motors can make 95% of peak velocity for a stock flywheel system or more on only a 2S battery. This is due to something I will get to later, which is getting up above critical speed for that flywheel/motor system, but what it means in practice is that you have a lot of battery options for these motors.
Posted by torukmakto4 at 3:54 PM