Something a bit crazy

When planning a build, one of the things that I like to do is to make a tape-and-hotglue mockup of the finished blaster to confirm that it works ergonomically. This is such a mockup.

In case it isn't easy to see in this picture, that's a Demolisher with a cut-down Stryfe on the side; there's one on the other side, too. The pusher mechanisms are to be linked internally such that all three component blasters can fire at once; I also intend to add extra notches to the magazines so that they can sit in the magwells without firing. The stock is going to be replaced with something that can hold two large battery packs - probably either a Nitron stock or something fabricated. My goal is to make something that looks unmodified to people who aren't familiar with Nerf.

This is, perhaps needless to say, unconventional, but there are some good reasons that motivate this build.
Here's another view:

With the batteries in the back, this blaster balances nicely, with the center of mass being close to the grip. You might notice the deformed and discolored area on the top of the Demolisher in the picture above - it's a result of Hasbro's penchant for unnecessary solvent wielding, but it's nothing that some decorative shaped PVC couldn't easily cover. 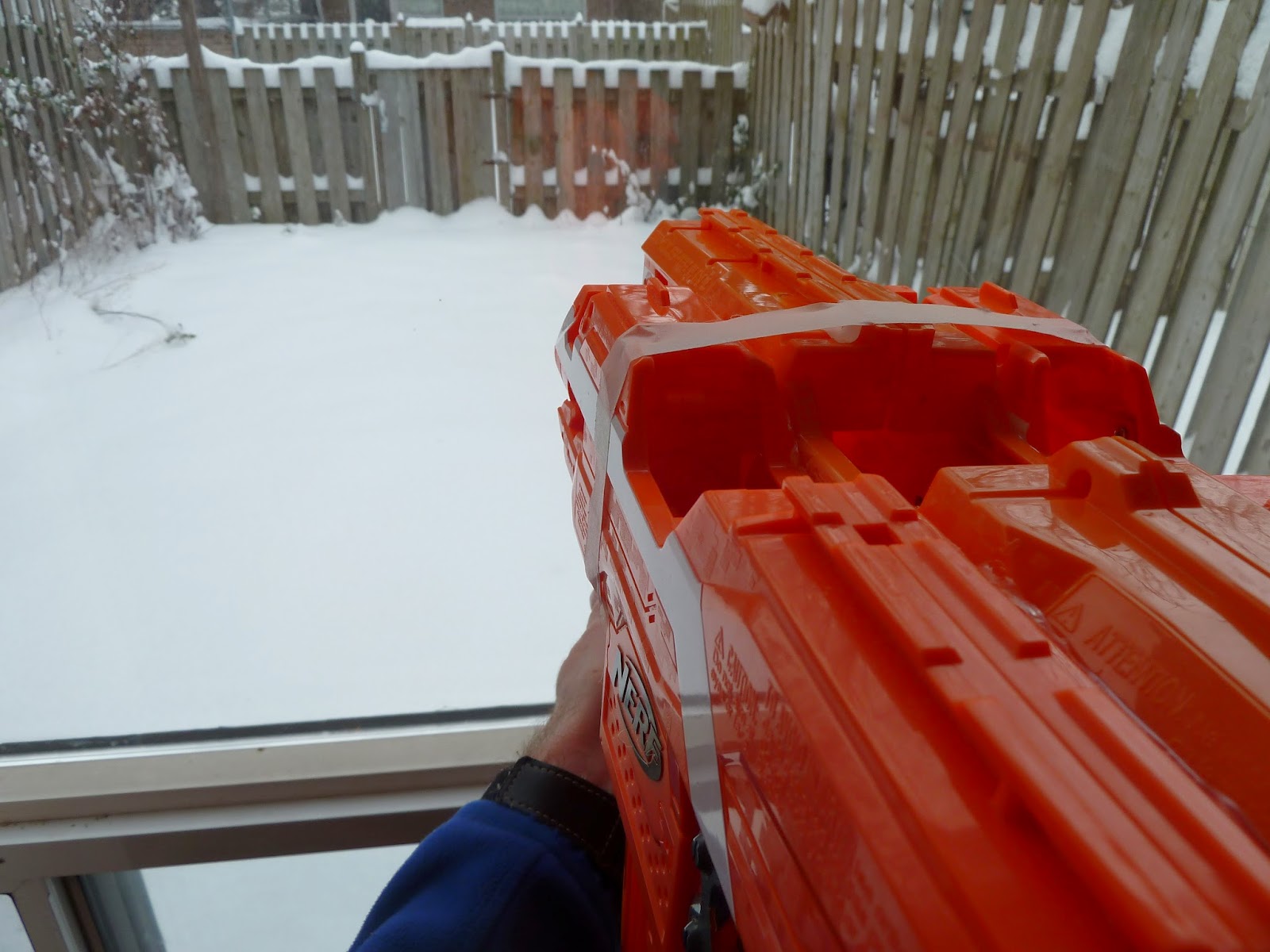 I've found the Demolisher's foregrip to be quite comfortable in its current position, which is odd as usually having a foregrip at a significantly different elevation from the grip throws off my aim. Perhaps the flat top of this blaster helps to keep my aim level. In any case, I'm happy with the launcher where it is.

Right now, the prototype is disassembled, and the hotglue has almost all been cleaned off. As an aside, hotglue has a bad reputation in Nerf, as noobs like to misuse it as a structural adhesive. It isn't hard to find people saying things like "The only thing that hotglue is good for is holding things in place while the real adhesive sets". I would agree with this attitude, except for the fact that hotglue is also good for gapfilling, securing low-temp electronics, impromptu weatherproofing, diffusing light from LEDs, rapid prototyping . . . in short, it has a lot of uses, and the fact that it has one prominent misuse shouldn't discredit it as a material.

Blade 180 installs and a diode-based adjustable power setting are planned upgrades but will not be present in the initial build. The current requirement for three sets of motors will be fairly large, especially with blades, so I am considering setting it up in such a way that only the flywheels whose corresponding magazine is active will be powered. As using the stock screws to hold the shells together is infeasible, I'm thinking of using magnets.

In short, this is going to be an all-around unusual and unconventional build.