Yet another old build getting reposted, this one mostly lifted from its post on the defunct Nerf Mods & News.

This is a Stampede build done quite a while ago. 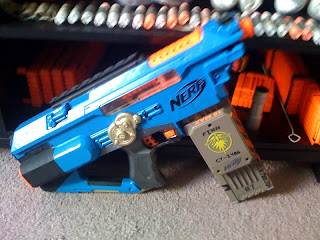 I had an old, earlier generation Stampede receiver and a bunch of other parts (yet not a complete internals kit) and figured I ought to have at least one shorty. I liked the idea of a pocket-sized yet full-powered and full-auto HVZ assault rifle. 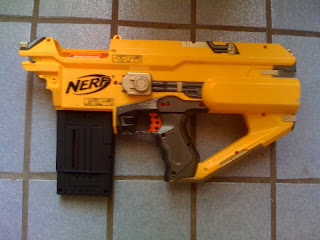 That led to my own unique take on the Krinkov style 'pede.

Immediately I decided I didn't want a typical SGnerf SMG. For me, there is absolutely no point in compromising the Stampede's already excellent ergonomics and handling with a minimization like this if the resulting gun isn't small and short enough to fit somewhere the full-size counterpart cannot. A SGnerf SMG is still quite long.

I settled on being as aggressive as possible with both barrel and stock lengths, and keeping the thumbhole stock for comfort (I like them) and the battery box for cleanliness so there aren't packs and wiring hanging out. After all, this is a streamlined little thing meant to be a concealed carry HVZ weapon that stows in a regular civvy backpack without attracting undead attention. 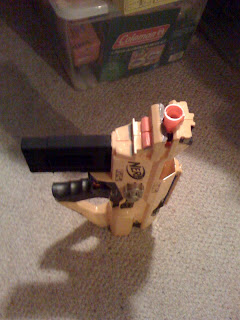 The receiver was reconstructed with scrap ABS in the original build. That chop was literally bringing that front surface within hair's width of critical parts, so it's a bit rough and strangely shaped.

One more funny little thing, the gun will stand vertically on the buttplate like this. 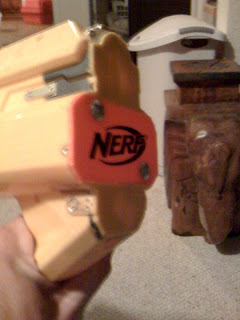 That buttplate is made from a Vulcan ammo can lid. 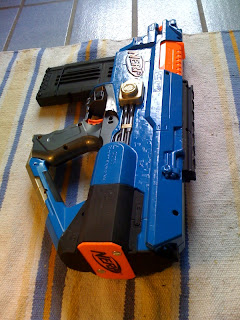 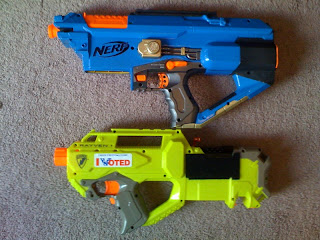 I initially planned this one to be a testbed for some more advanced stuff like MOSFETs, but I ended up just doing an ordinary build with it when I got my donor gun. It got the Everbilt 11.20kg spring and a basic stock bolt, stock 360 motor, stock cycle switch, all new 16gauge harness, Deans and all the usual electrical. It chrono'd at 90-105fps with 1.3s.

I later ended up commissioning one of these with some changes, and caught some shots of how the receiver is reconstructed. Green and purple stuff are PVC sheet once again. 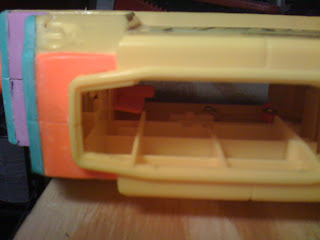 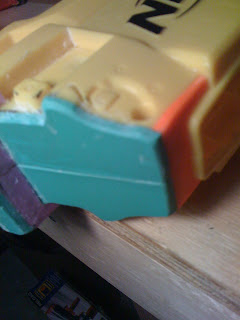 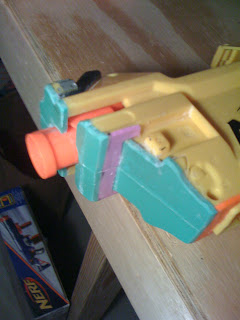 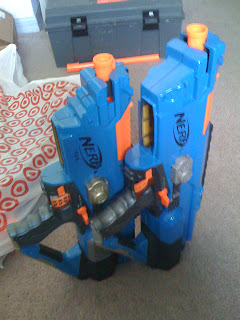 Original on left, commission on right. 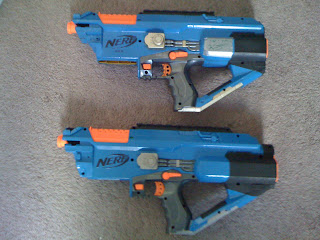 Unfortunately, the lower gun above is now back in my hands waiting to have its spring downgraded and its third gearset replaced. It was part of an outbreak of gearbox failures I have had with later production stampedes using these build specs. Unfortunately the era of stock gearsets that can handle higher end springs seems to be over, and even shooting a basic 100fps reliably with a Stampede has become an expensive hassle involving aftermarket parts. Ugh. It's not going to deter me from developing further for my own uses, but to me the pede is dead as a viable competitive HVZ primary. Flywheels already have it beat on so many fronts, and this is just one more nail for the coffin.

At least you can expect a Pak Designs gearset review outta me in the future... 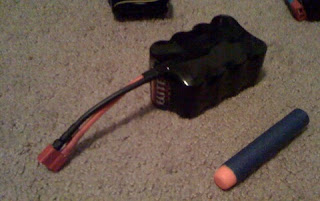 Back to my own Guardian (which is extremely reliable), since recently it has been powered by a custom made 12 cell Elite 1500 NiMH battery pack, shown here alongside an elite dart. Oh, boy, another subject I really ought to document. Custom battery packs. Battery packs and batteries in general.