The prop is a dressed up Magpul Masada.

One of the unique features, and most relevant to why I would lock on to this weapon as something to build, is that the shrouds stand above the barrel a good distance.

As soon as I saw the damn thing I had evil Nerf intent.

Well, we have something that would make it easy as hell to build a 80% or so replica of the Oblivion rifle. 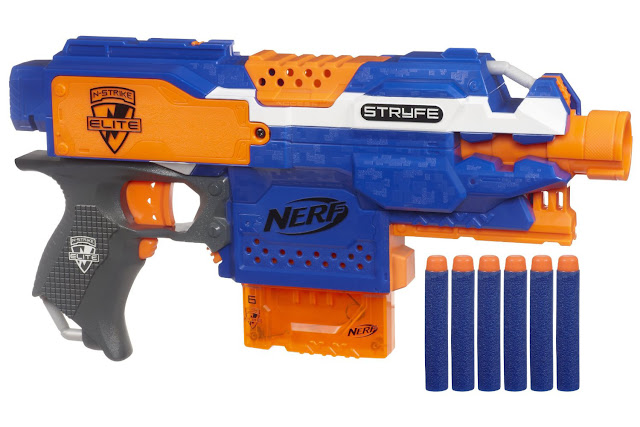 I am not in the prop hobby nor a stickler about perfect accuracy... not that I could be when building Nerf guns, unless I wanted Terra Nova props... unlike airsoft, Nerf just does NOT lend itself to replicating props nor firearms.

But the good little Stryfe is slim enough and has a notably AR15-ish general geometry and magwell design. With a little adjustment and some careful PVC it could be decent. From a distance. So there's the lower receiver taken care of.

The Stryfe also has some typically troublesome geometry. The top of the receiver is way up there above the barrel - because it's a flywheel gun and that top fly has to go somewhere, doesn't it? That makes most attempts to make an AR replica of a stryfe, IMO, fail. But for this rifle, the shrouds will leave plenty of room for that.

There's even a protrusion ahead of the AR lower, where the lower flywheel of my stryfe will need to stick out just slightly. You can see Jack's hand resting on it. Amazing how that stacked up.

Finally? The shrouds. Could they get simpler?

No difficult detail work. I could bang those out of sheet PVC with a heat gun without too much trouble. Note the shrouds could be formed as pieces of 3 telescoping sizes. Will probably need a wooden form for the base layer, then form the other 2 over each other so everything matches up.

Something useful about the Oblivion rifle is that it integrates an LED tactical light inside the shrouds. I will obviously need to have one on this. Also, the optic could be custom'd as a dummy mockup but I might just throw a nitron optic on there and call it good.

Planning cade motors and 9 elite 1500 cells internal. It will not be a primary primary, so to speak, but I just might paint it up HvZ safe and use it on zeds.
Posted by torukmakto4 at 3:33 PM