Back around December 2012, I was pretty much going through the motions on a Stryfe. It was going to get a set of Barricade motors dumped in, a new wiring harness and all the other tweaks I usually perform on flywheel guns - just a basic, 130 motor build. Nothing special, just functionality. 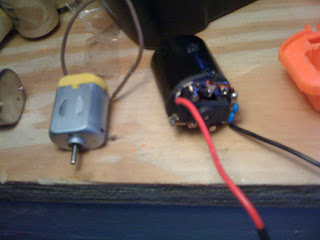 However, one of the Barricade motors (left) I picked up would not hit full speed or match the other motor in the pair for anything, and I was not in a position to chase down another at the moment. I was pissed off at buying a lemon motor set from someone and I wanted that goddamn thing to just get buttoned up and shooting...

Except, I happened to notice these (right) at the local surplus dealer and...

I don't have much info on them. They seem to be a high-end 280 motor. Dare I say, they might be QC rejects from a hobby supplier.

They have hooded brushes with torsion springs, open endbells, strong magnets... definitely RC motors. The manufacturer's badge molded into the endbell (which is glass filled nylon) has been filled in with some kind of epoxy resin... Odd. As if deliberate attempt was made to debrand these things, hence why I think QC rejects. I suspect that the manufacturer is Sagami. They are hot little things. 6 cells yielded plenty of torque, speed and heat out of them. 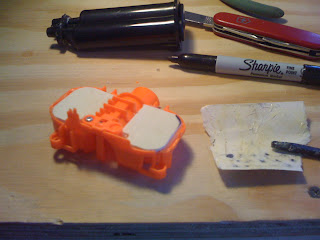 Now, being that I have done some overkill flywheel motors in the past (the original 300 series Banshee conversions originated by a fellow HVZer that were probably the first hi-po flywheel guns ever) I didn't shy away from Banshee'ing my stryfe. I thought there was potential here.

Here I have started on the motor mount fabrication by cleaning up the stock flywheel cage and sheeting it over with PVC sheet bonded with Devcon Plastic Welder. Both the PVC sheet and the Devcon deserve posts of their own but I will get to that. 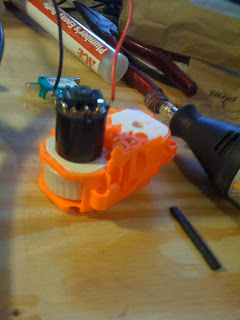 Test fitting motors. Here you can also see a Buzzbee T20A flywheel installed. I ended up using these in the finished product. They are a serrated 34.3mm, 2.0mm bore ABS flywheel. With stock motor locations they set the gap perfectly for the new motors. 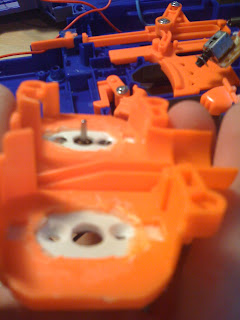 
Unlike 130 motors there is little room to use the "can-in-bucket" mount design to nest the motor inside the offset hub flywheel. Instead, the flywheels are turned around from their typical 130 motor orientation and the motors are mounted on a flat surface.

It all just fell together from there. The receiver got perforated... 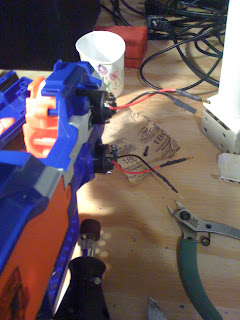 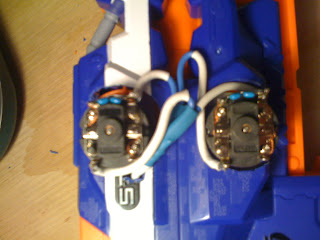 16g, Elite-colored wiring harness. That is PVC insulated wire, so it was covered with heatshrink anywhere it touches or might touch the motor cans, so as to avoid problems with heat and chafing of insulation. 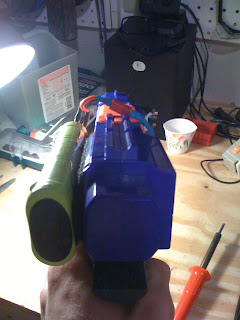 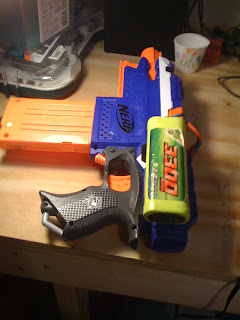 Here you can see the battery pack in its final location. This is par for the course for me to have a pack velcroed to the outside of a flywheel gun, because they don't usually come with any sort of solution for mounting real batteries and the velcro is more efficient and lighter than something like a custom stock or battery box. Perhaps if I was building props, I would take care to cram my battery setups neatly inside something, but I am building sporting equipment here and it will still shoot zombies whether you can see that battery pack or not. 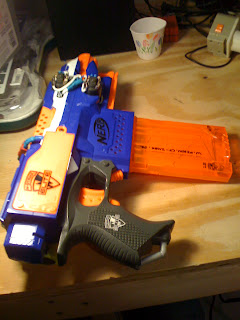 By the way... I will post later about batteries in more detail, but this build illustrates exactly what I mean when I have posted on forums about "free lunch" and "REAL batteries". Wiring, too.

Specifically, this gun IDLING (NOT starting up, or stalled!) draws about 10 amps. No, not 1.0 amps. Ten amps. It ABSOLUTELY REQUIRES beefy batteries that can swing what must be over 50 amps in case of a stall. It also ABSOLUTELY REQUIRES big wire and proper soldering and wiring practices. Without proper attention to electrical, it would be unusable and dangerous to do this. If you hooked these motors up to Trustfires, you would probably have a kaboom on your hands. 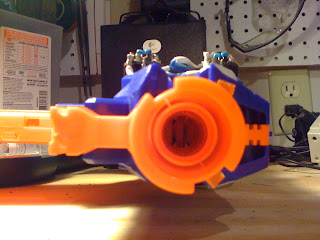 Battery life is not what you would expect. Or perhaps it's exactly what you expected when I mentioned the currents involved. It's mildly annoying that this thing can actually flatten a 3300 sub-C pack in a reasonable amount of use. Oh well, it's still better than those godawful 14500 cells. 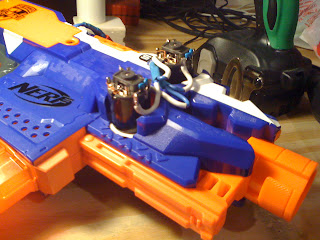 I'm not going to cover up those beautiful motors. They are fine to be exposed and probably benefit from cooling air anyway. 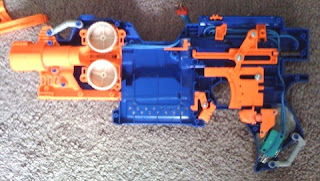 Internals. Currently, motor power is controlled by a microswitch. I was planning a MOSFET, but if switches continue to give acceptable life I will just keep it. 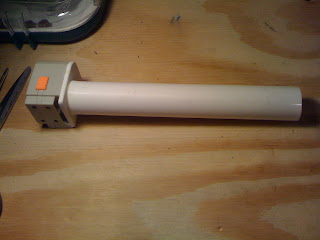 Now all this thing, which deserves to be a rifle, needs is a stock. I scrapped a disused Spectre folder for the mount to make a Stryfe-specific fixed stock with the correct drop to be an inline configuration on the Stryfe. Something wonky and annoying about this gun is the fact that it doesn't have the modular stock mount in a standard location - it's centered ABOVE the bore axis. Every time I see Raider stocks and other inline stocks designed for the CS platform appear on a stryfe, I cringe.

This was a simple fab job with some PVC pipe and sheet. The buttplate/brace piece was bent with a heat gun. The result is solid as hell. Once again, Devcon played a critical role. 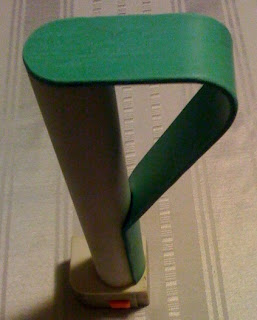 Chronos around 115fps with the 7.2v pack. That's enough for stock darts.

An interesting property of Banshee type (high torque, heavy rotating assembly) flywheel guns is their constant-velocity behavior. Change projectile mass all you want, you get roughly the same velocity. This also applies to 130 motors and you do have to consider that when i.e. determining whether elite darts will improve ballistics from a given gun. If it's flywheel, you won't gain much velocity and will lose muzzle energy with lighter darts.

The real advantage of the Cyclone conversion is windup and recovery time. Specifically, there isn't any to speak of. Mash grip switch, pull trigger. Spam all you want, there is no velocity loss unless you are really rolling it - and I mean bump-firing at 600RPM trying to simulate full auto to test a magazine for reliability.

In a nutshell, the Cyclone conversion removes the usual Achilles' heel of flywheel guns.