Seeing as there is no easy way to make a RS stock battery "user removable", I planned to add a connector for charging the pack in place from the start. 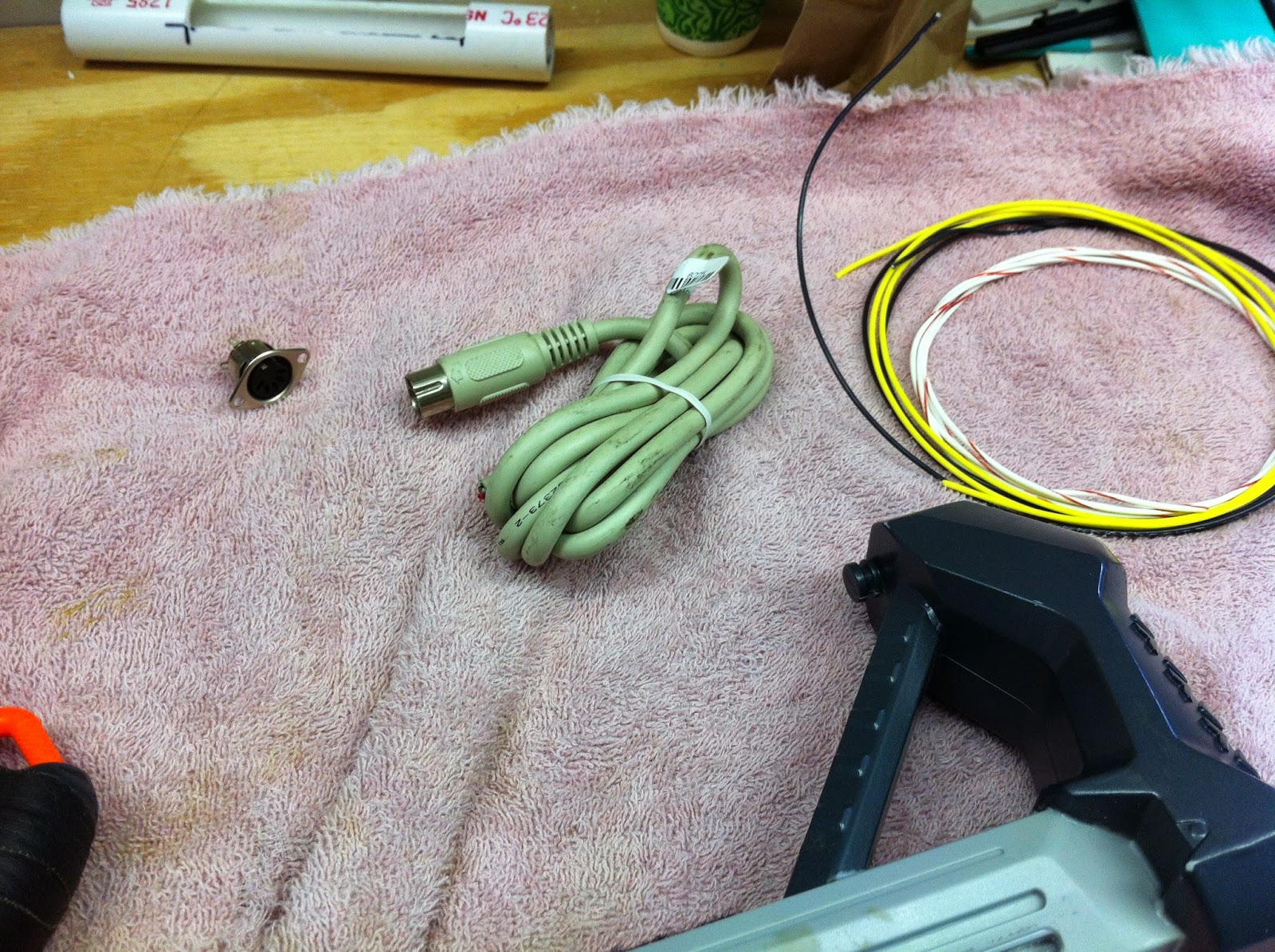 Any simple charge connector install will have battery voltage on it continuously, so choosing a connector that properly guards against short circuits is imperative. Generally, that means pin-based designs should have a female connector on the gun.

Also, if you are going to use your charge connector to supply power to anything external, be sure to use a connector rated for whatever current is involved.

Finally, you need the correct number of conductors to charge your battery. For nickel chemistries, this is 2, and you can use a cheap and small DC barrel jack (but only a barrel jack, not some audio connector such as a 3.5mm TRS, RCA or 1/4", as I have seen some nerfers use incorrectly for power).

For lithium-ion, regardless of what anyone else tells you about charging these, nowadays it is considered mandatory to balance charge, or at least use a charger that monitors individual cells. This requires 3 more wires than there are cells in series - you need 5 wires for a 2S pack. Go look at a lipo and note the total number of pins on both connectors - yes, do you need all of them. More about that later.

This is the connector installation in the receiver. 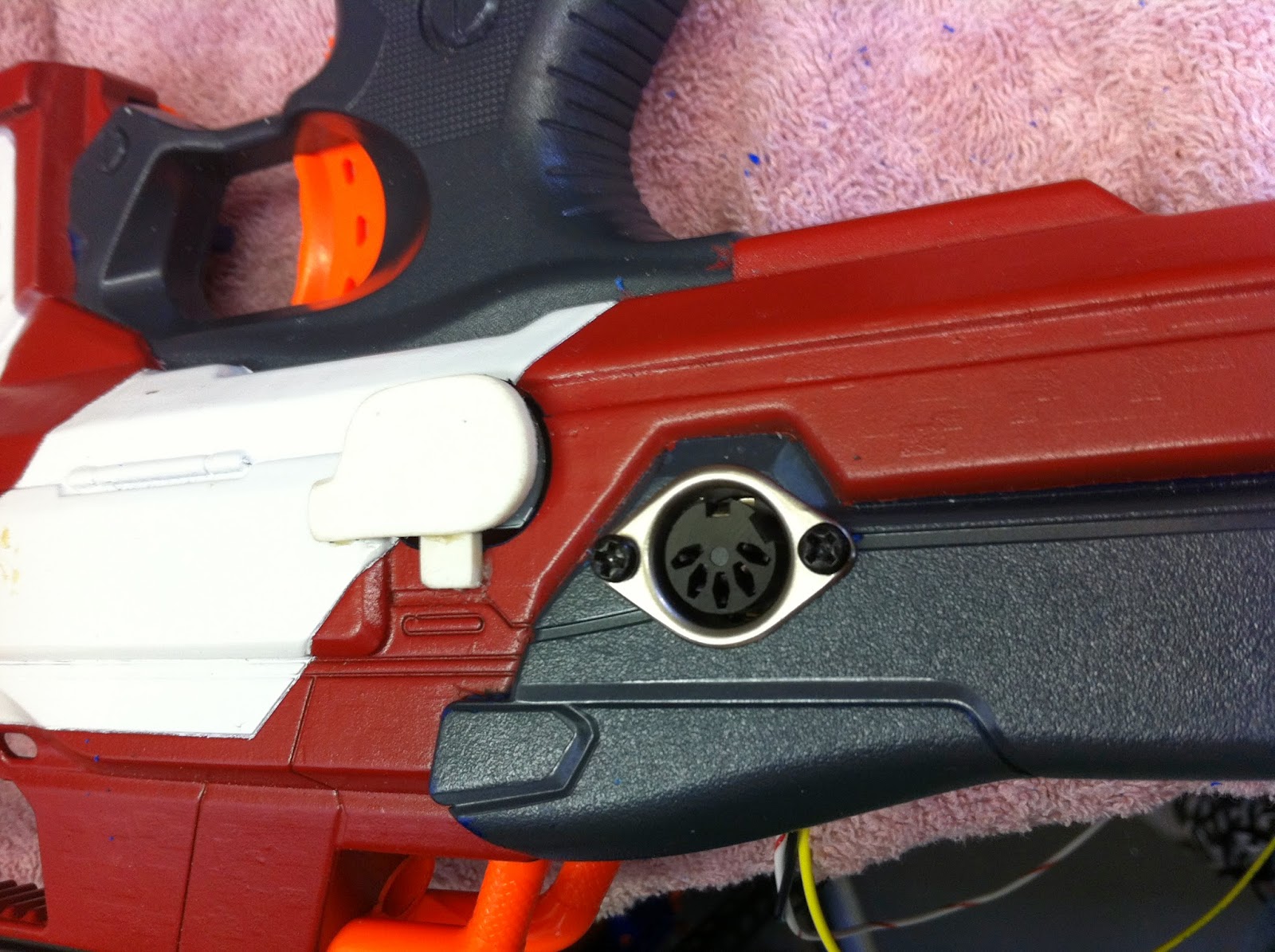 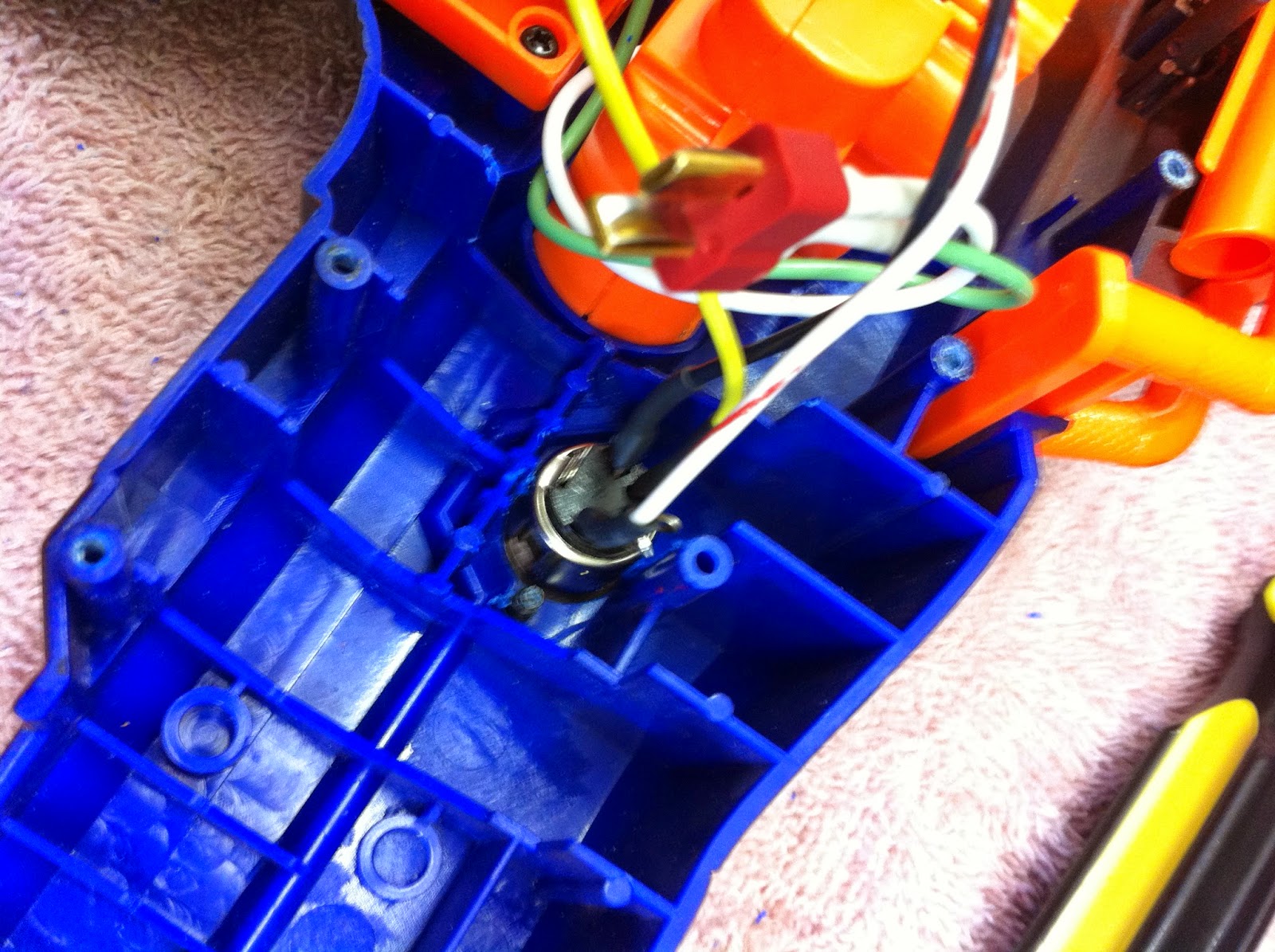 And the cable plugged in. 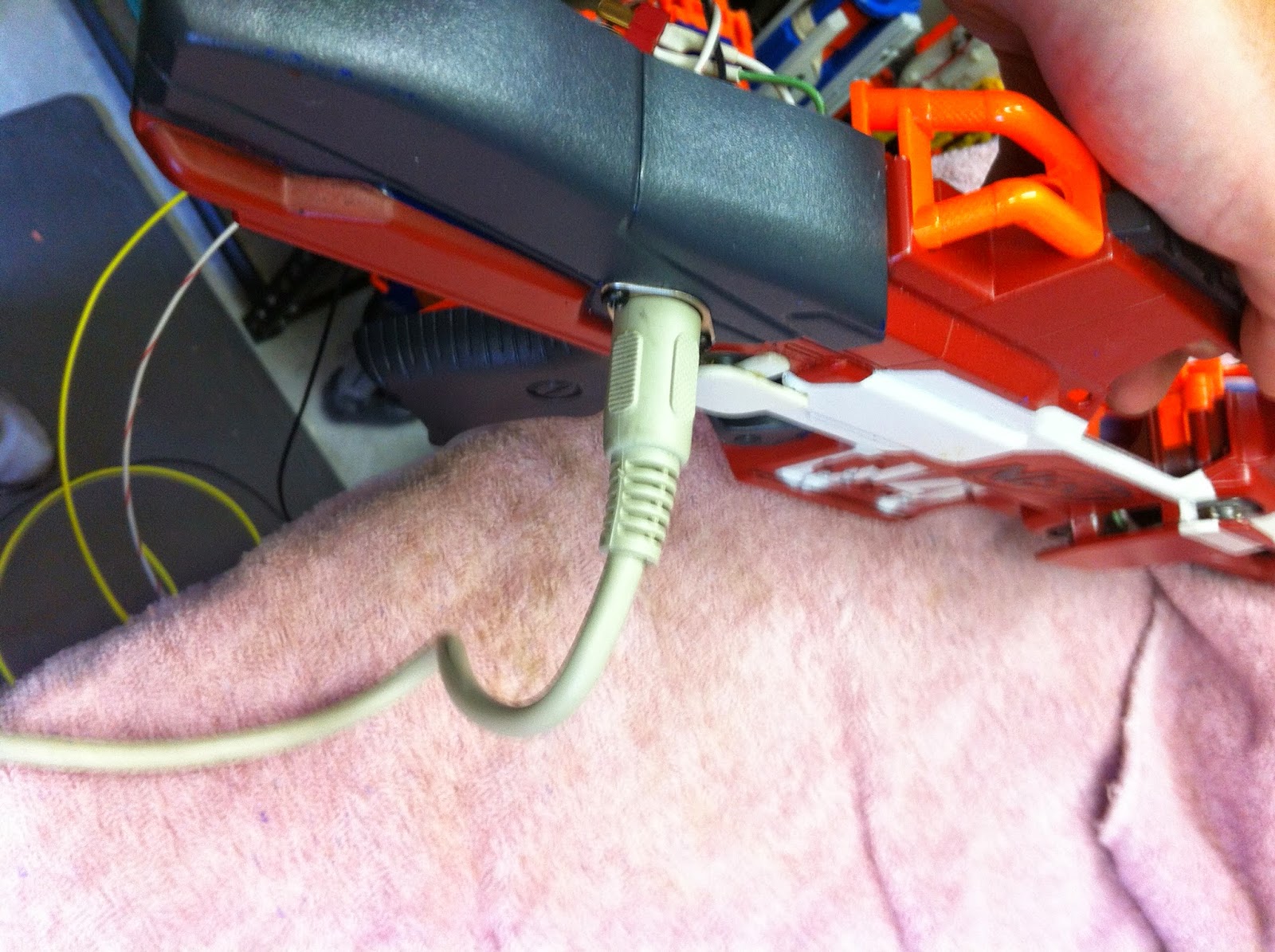 Remember what I said about needing access to every single wire coming out of a lipo (or other lithium-ion pack with multiple cells in series) in order to charge it properly?

A Li-ion balance charger typically has 2 separate connectors that are attached to the pack.

One is the balance tap connector, which has one wire for each interconnect between cells plus each free end of the series string - 3 wires for a 2S pack, 4 for a 3S, and so on - and these wires are supposed to terminate as close to the actual cell as possible. This is used to sense cell voltage as well as charge or discharge individual cells to balance the pack.

The other connector plugs into the pack's discharge leads and is used to pump charge current through the pack.

Note that this arrangement minimizes or eliminates the portion of the main charge current path that is shared with the balance connections. Wiring and interconnects have resistance, and when charge current is forced through resistances, voltages appear across those resistances. If these voltage drops are included in the cell voltages measured by the charger, they constitute errors. Even if we are talking about large power wires and Deans and the like that really don't have much resistance relative to the charger current, even small voltage errors are a big deal in Li-ion charging.

This is why balance connectors have "seemingly redundant" connections to the pack, namely the ones that duplicate the pack positive and negative leads. 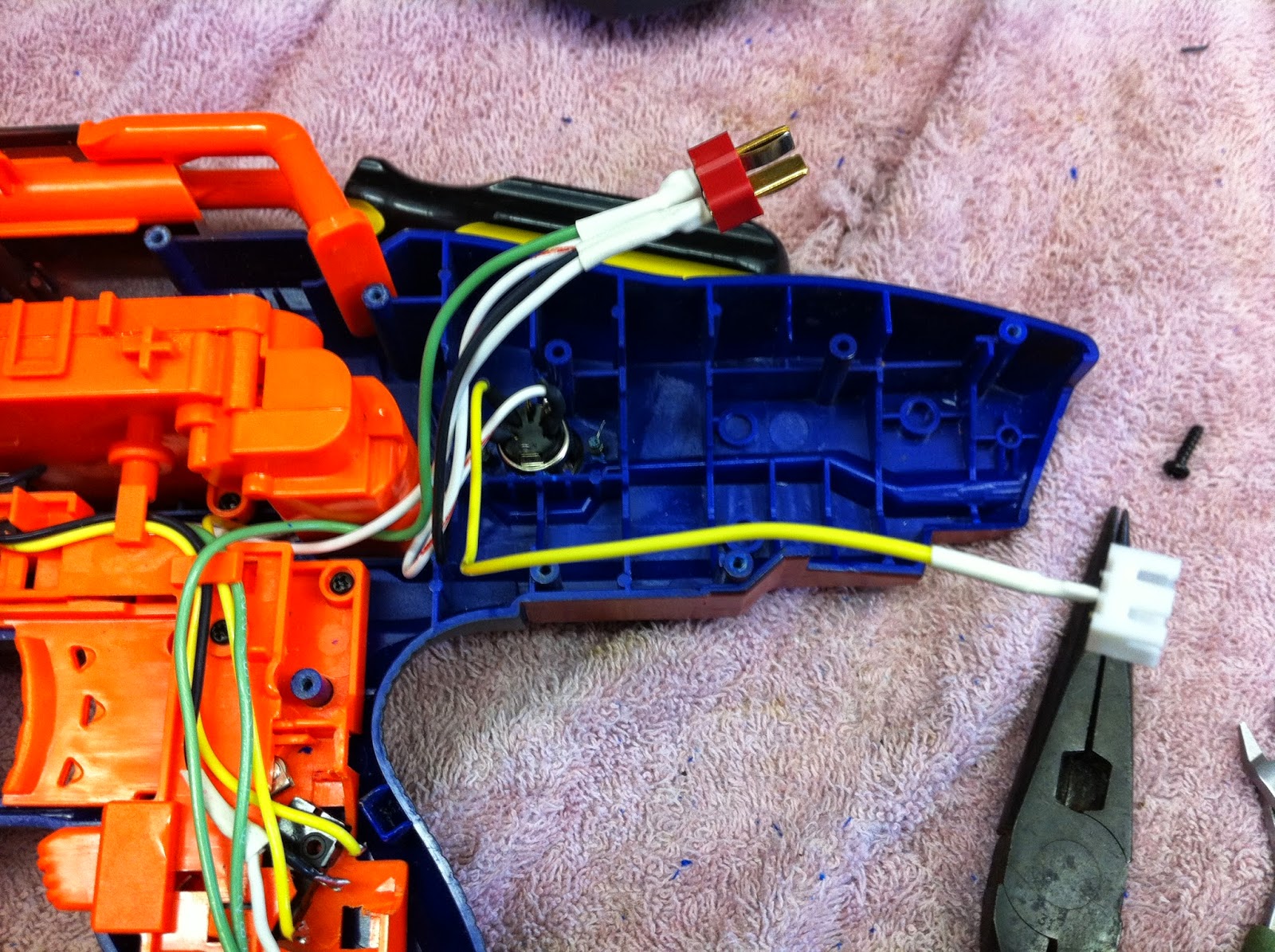 When you install wiring for charging a Li-ion pack, it is important to maintain this separation, and not share wires - for example using 3 wires to charge a 2S and just cheating by hooking your innermost and outermost balance connections to the main leads at the charger.

That is however, what I did here. Go ahead and boo and hiss.

I found out my surplus cable has one pin unconnected and I needed this rig working now. That it does, but charging at too high current will give the charger fits, and balancing isn't perfect either. Moral of the story this is not just theory the RC people talk about with balance wiring!

This bad cable will be replaced and the wiring switched to use all 5 pins and separate balance wires in the near future. Hell, probably in the very near future, as the kludgeness of this thing grates on me. 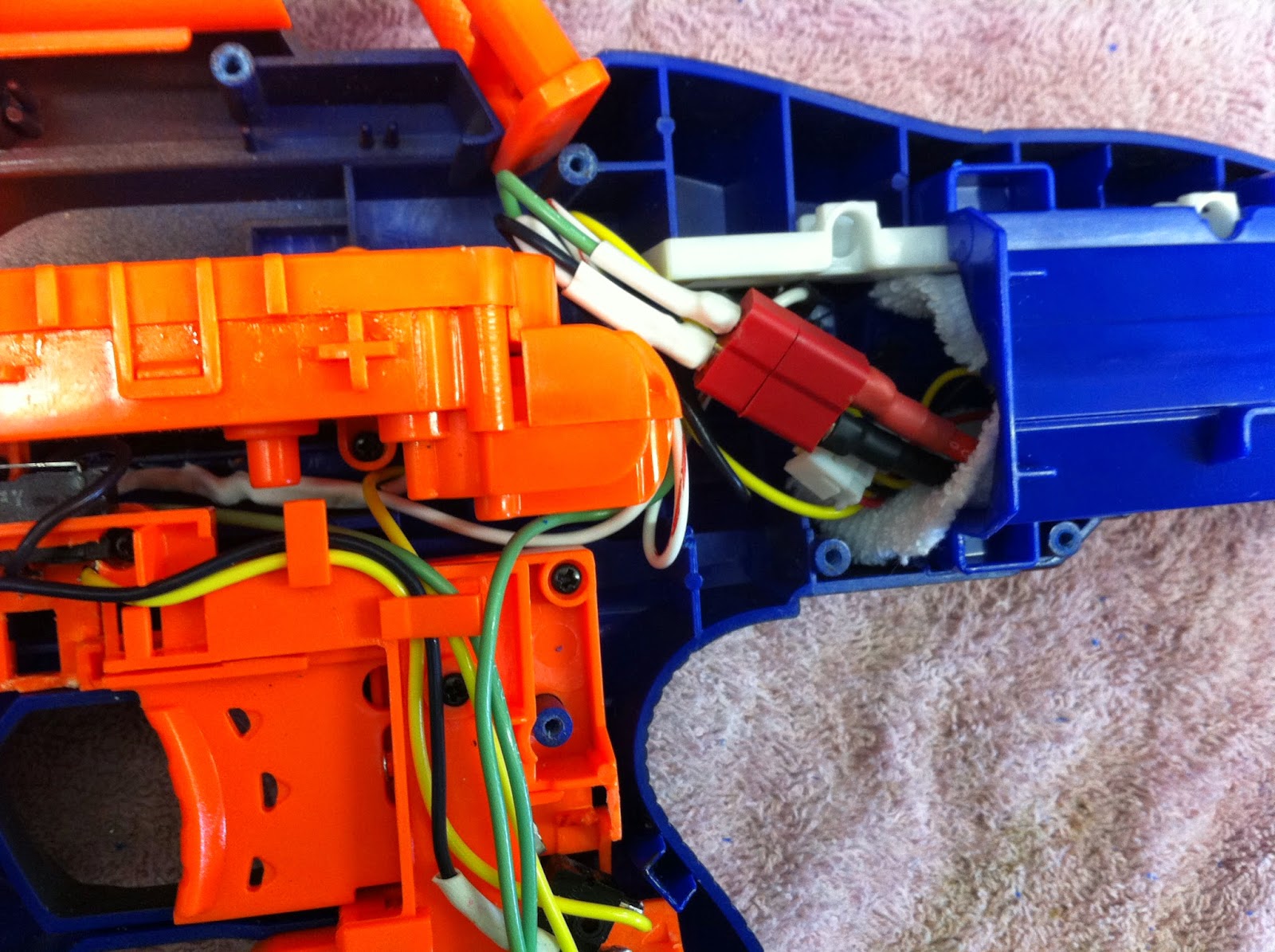 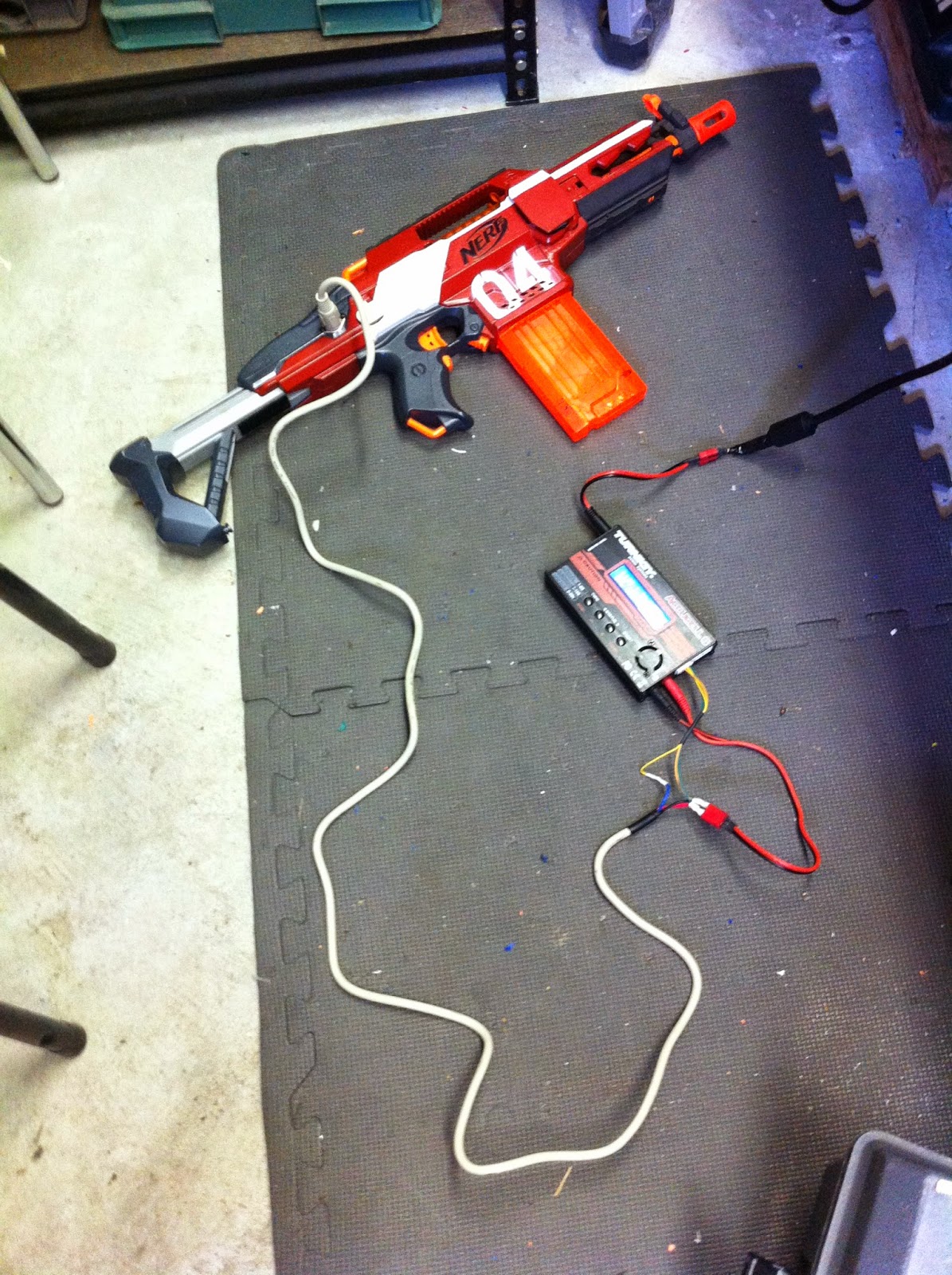 As a footnote, charging LiPo while installed in something is strongly frowned on. If you use LiPo (and not LiFePO4, NiMH, or hybrid Li-ion like me) you should avoid this type of setup entirely.
Posted by torukmakto4 at 8:22 PM