A little less than a month ago, I was alerted to the appearance of a new low cost Chinese dart on Amazon, from a vendor called Voberry.

At first glance, the image and the "6.7cm" in the description led me to believe these were just more of those cheater-length hard plastic tipped junk darts, but reading the reviews posted on Amazon suggested otherwise, with claims that these were "slightly longer than" Elites and "durable" with no mention of tip glue problems, so I gave them a shot with a 100 round test batch. 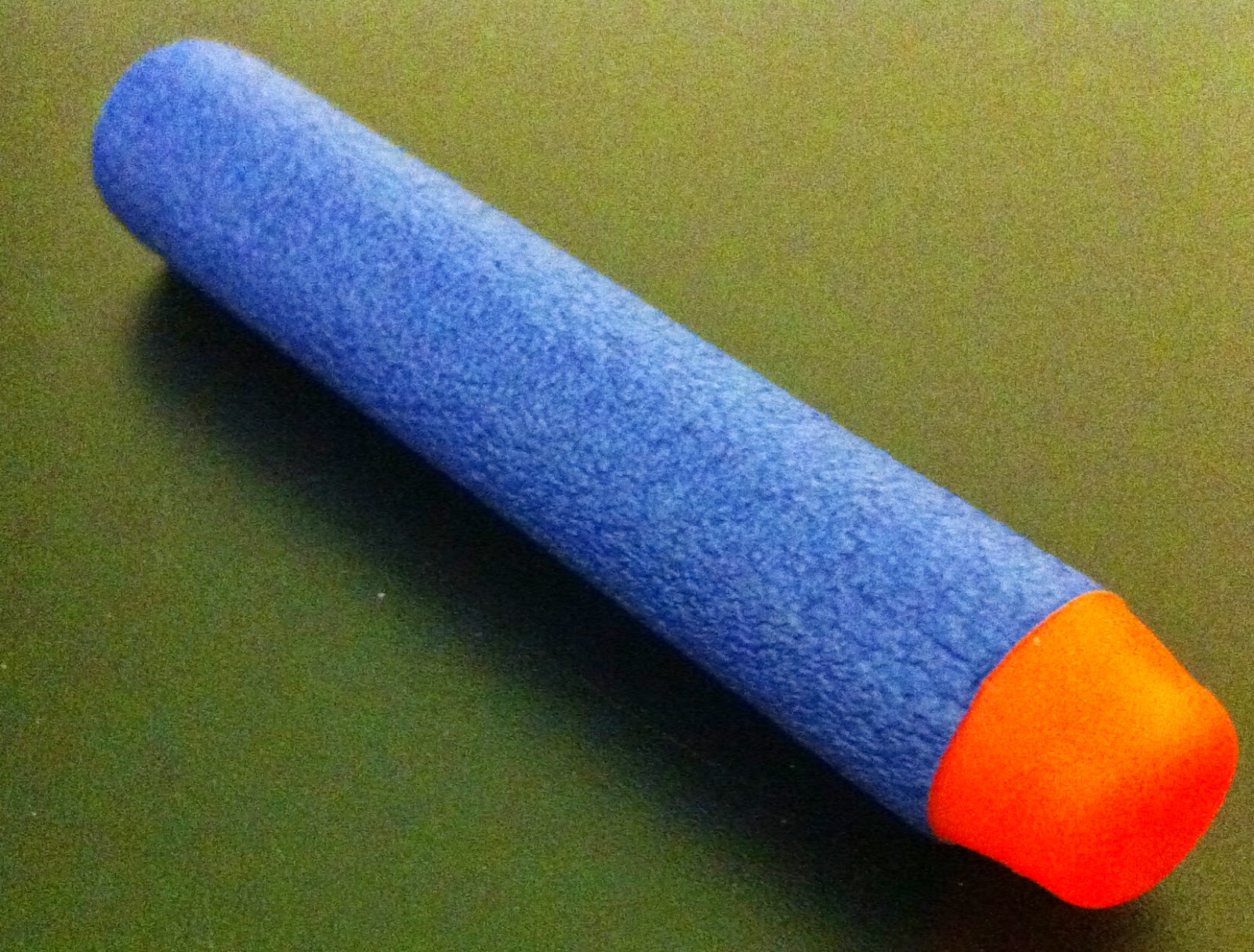 Price wise, these are currently at $4.11 shipped per 50 rounds giving a cost of 8.22 cents per round, which is certainly excellent, and competitive with any of the other low-cost darts sold in bulk at the time (such as the well-known "koosh dart" and the "7.2 cm" knockoff Elites).

The seller I purchased from (JLTech1) seems to no longer stock these; however, 2 other sellers do.

The seller shipped via China Post. No functional tracking was provided. The package arrived in about 2 weeks.

Only a few deformed foams were found on opening the package which did recover.


As is standard for bulk darts from Asian vendors, they arrive in 10-round plastic packets. 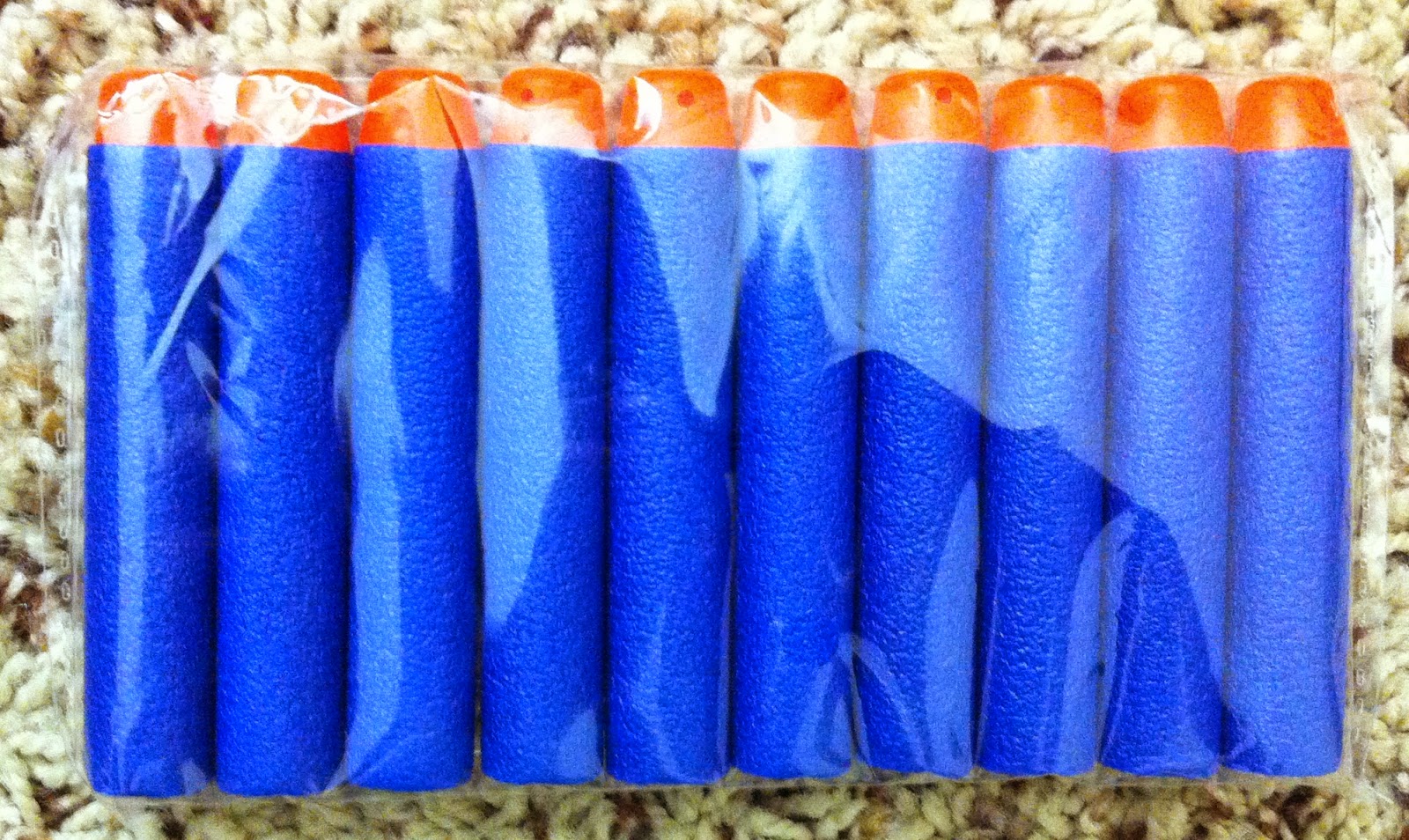 The foam quality and density is excellent, probably superior to all Nerf brand foams of the modern era. These should last a good long time.

Of note is the foam OD, which is larger than typical .50 cal "stock" foams. I would guess these are a medium spring fit in .530 bore or so. 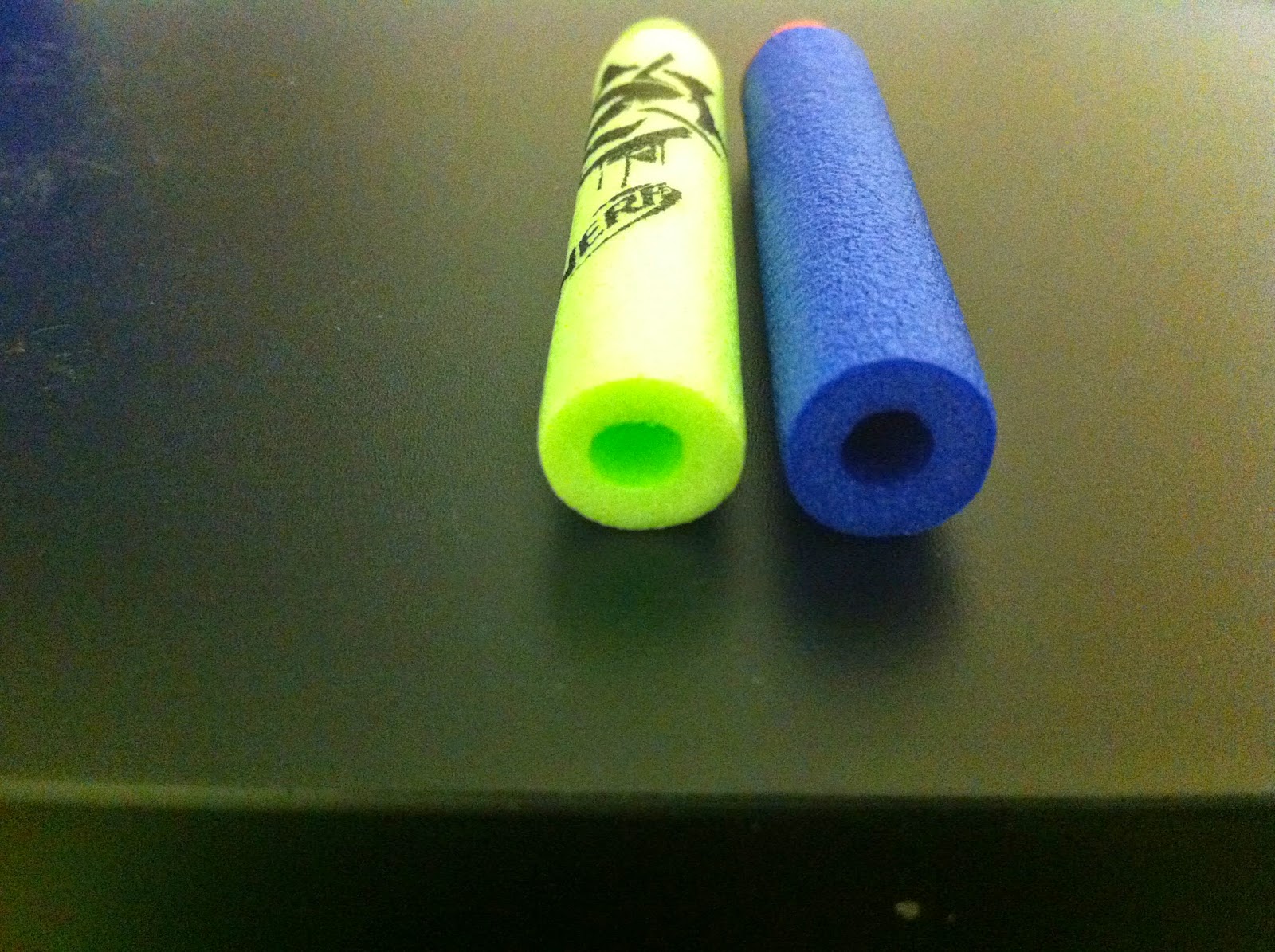 Fits in Nerf's stock barrels are unusually tight, but within optimal range for springers (whereas most "stock" foams are on the low end and tend to become a match or an overbore and thus underperforming and falling-out as soon as they wear out even a little).

The tip appears to be entirely constructed from a plasticized PVC compound of similar hardness to the thermoplastic elastomer used for genuine Elite tips. This is in common with clone Firefly streamline and elite sold by happyeverydaysales (HEDS) near the end of their dart sales.

The dome has much less tack than said rubber tips, however. This is beneficial for reliability and smooth feeding. These are excellent in magazine compatibility.

The tips are solidly installed on the foam with no dreaded glue faults.

A cross-section reveals the tip construction:

Like Elite tips, these are a 2-part design with a hollow cushioning/ballistic tip dome, vented by a small air hole to allow deflation on impact, with a dense "squib" of a second material forming the core and containing most of the mass.

In this case, the squib material appears to be identical to the dome, however, unlike a real Elite, but like an old-style Streamline.

The two appear to be mated by an overmold process as they are very well welded together and inseparable.

I cannot confirm the mass of these at the moment, but it feels (and shoots like, see chrono data) greater than that of a Streamline - perhaps 1.4g. Also, note the core length, shorter than a Streamline but about twice that of an Elite.

The overall length is very close to that of a Nerf brand full length streamline, not longer as some reviewers suggested.

As usual I put a bunch of these over the chrono. I do not have my full arsenal to test everything at the moment, so certain somewhat important concerns remain unaddressed (such as reliability in mag-fed springers) but at least Update: These have been tested with a Retal and a Stampede and ran fine suggesting no problems with magfed springer breech systems, and functionality of the barrel fit is confirmed with the troublesome Strongarm, which is a bit of a surprise.

Note how low the velocities are. That is consistent with a heavier projectile. I suspect these to be excessively heavy for stock class use. Consistency was OK, but given a heavier mass and lower velocities, I would not rate these well for consistency with a few bothersome numbers seen during this session. The Tacmod snap test numbers were also all over the place and I don't feel as confident with these as with Elite.

Preliminary accuracy observations were not impressive. These feel like Streamlines to shoot. It's like time traveling back to 2011. Elites, at least good ones, definitely have the edge in both time on target and accuracy.

Now here's where things go from OK to a bit sketchy. 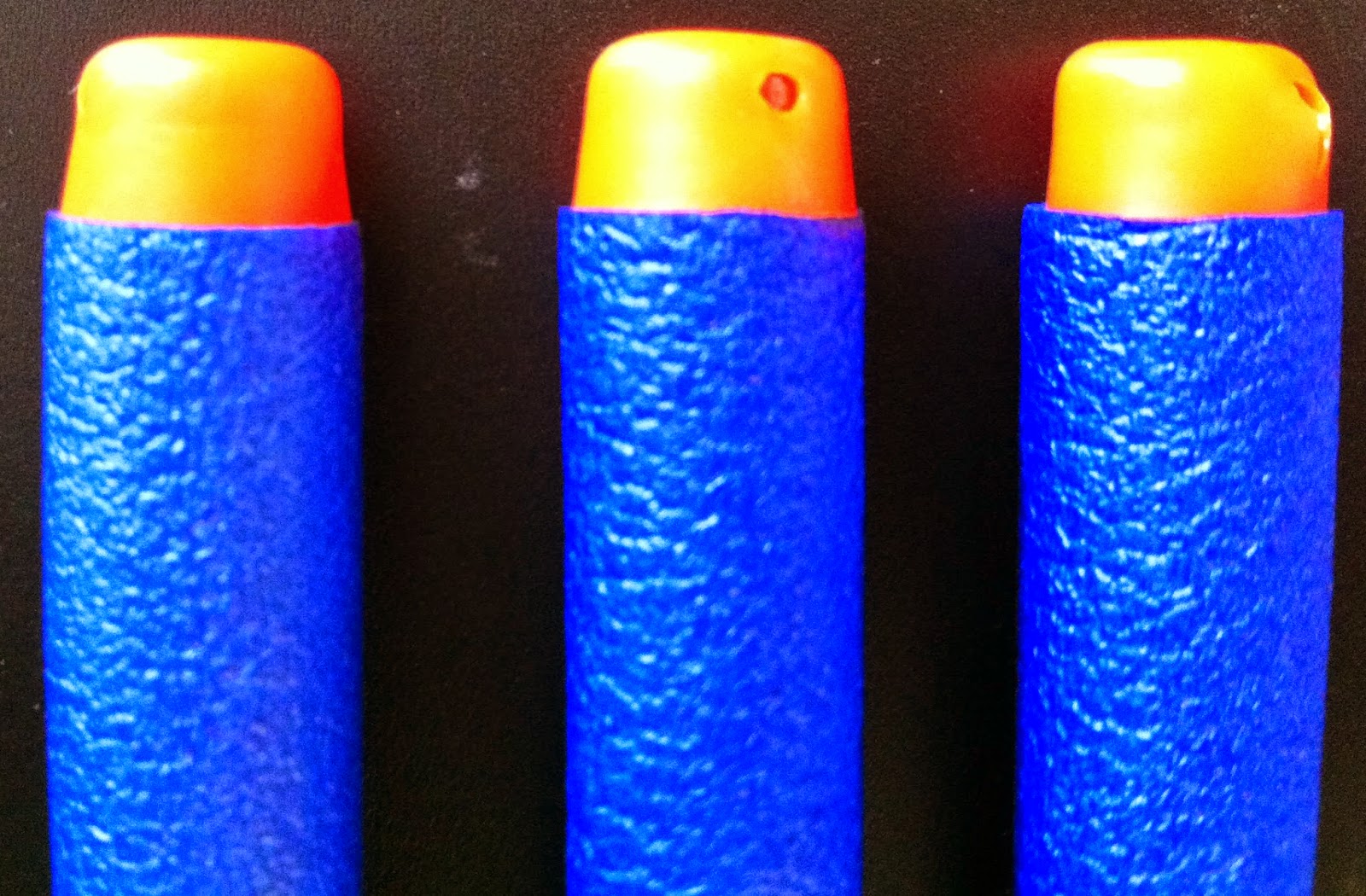 Out of the 20 unused darts that I unwrapped for the test shoot, THREE of them came right out of the factory with the tip dome feeling SOLID.

Like it had been pumped full of hotglue by a noob, solid!

Visible through the vent hole was clear material, as used in the tip core...


Here you can see some of it through the split vent hole. 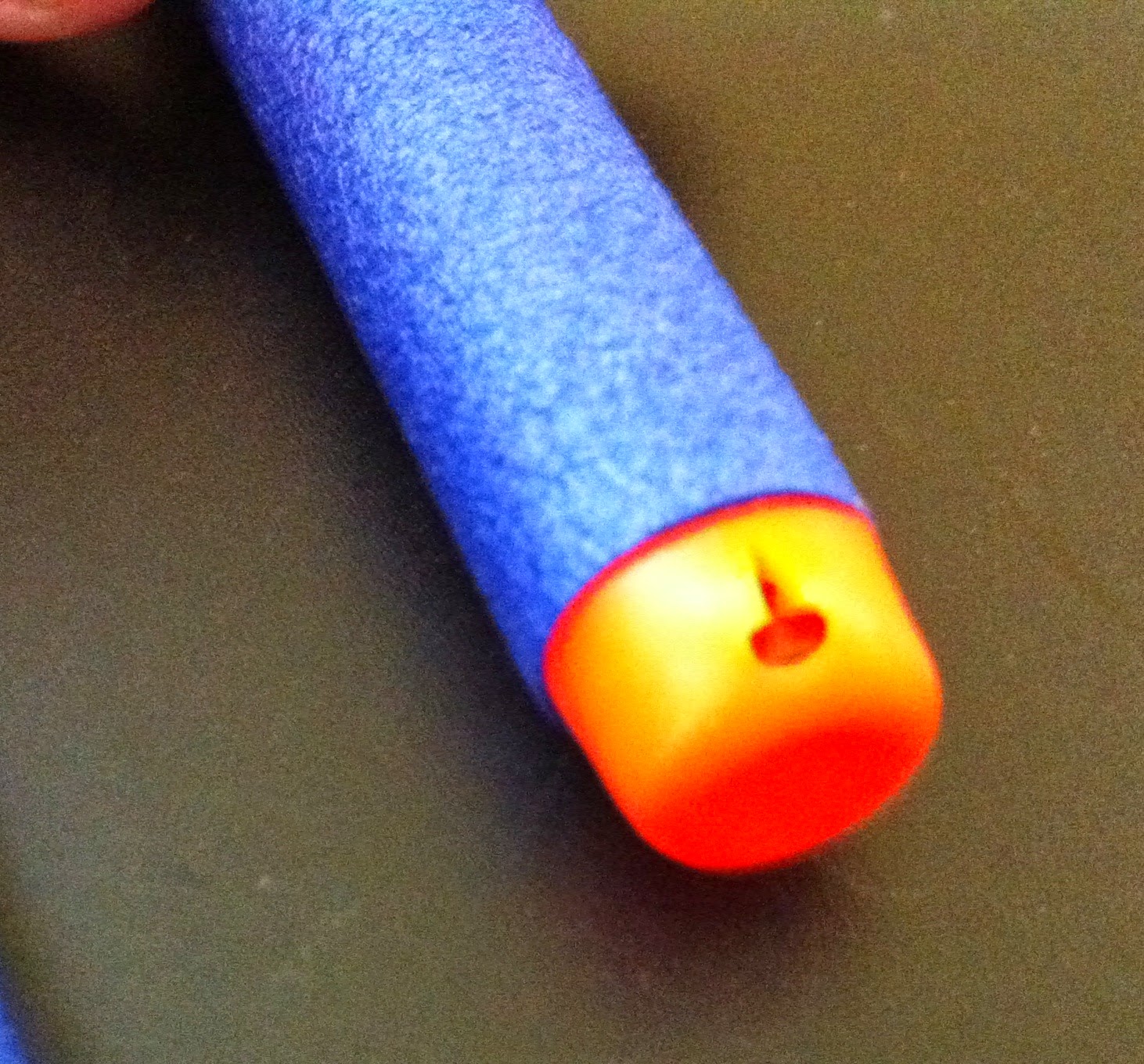 ...And cutting one of these in half reveals the cause. 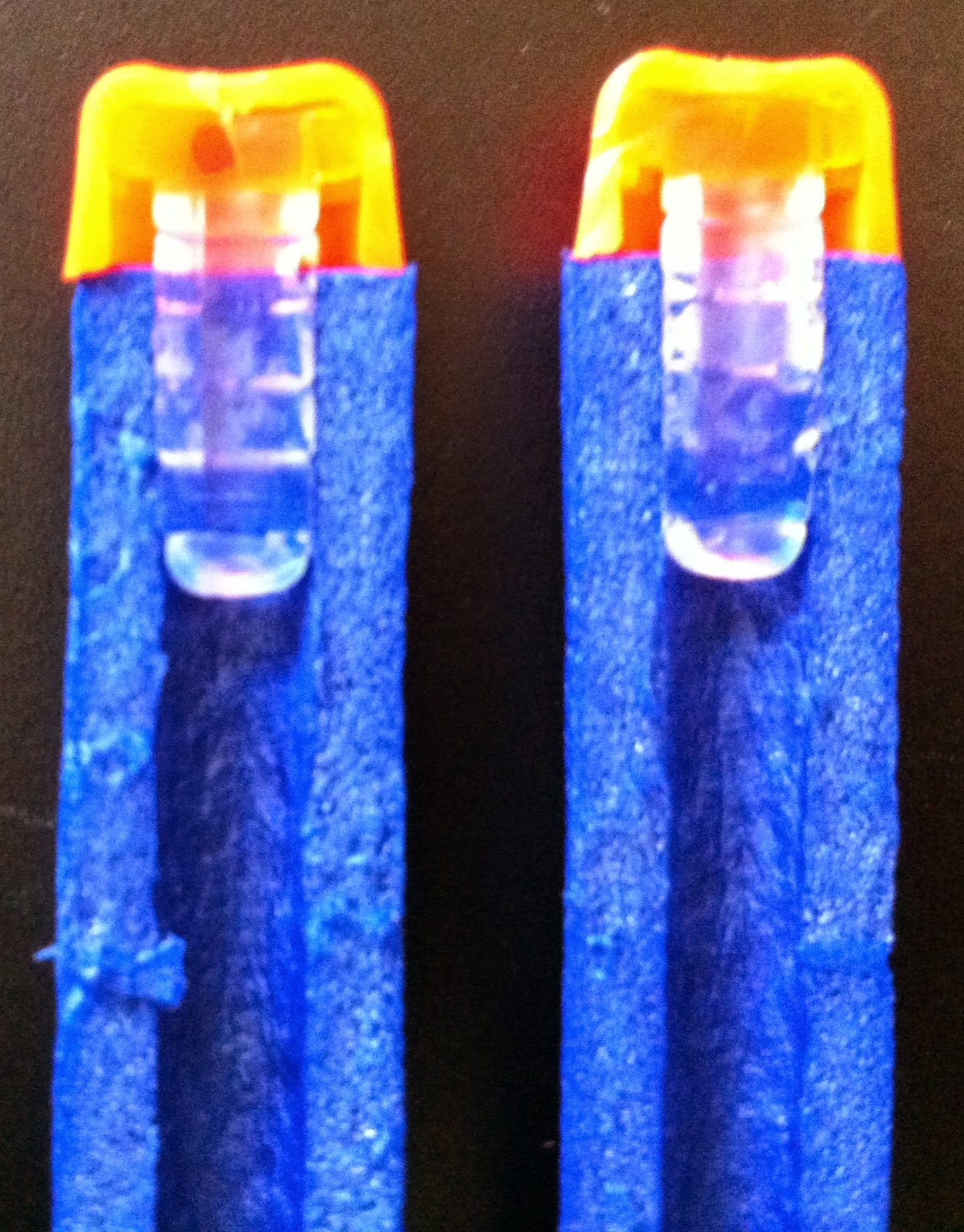 The tip core of this dart has been assembled incorrectly to the dome, apparently by some kind of overmolding process error. No air pocket is left. The weld is still solid as usual. Strange indeed.

Comparison to a normal tip. 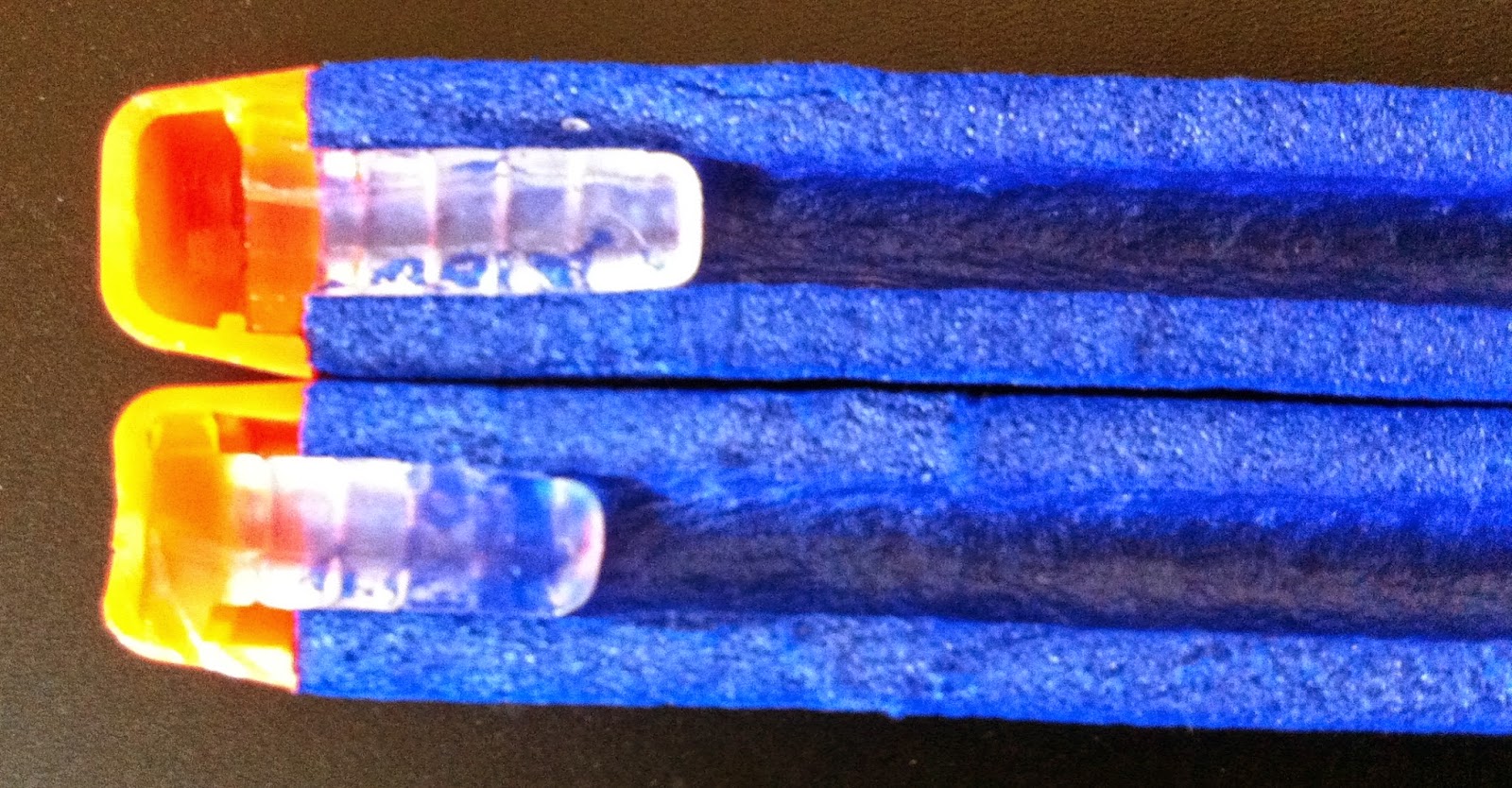 Such darts are still perfectly functional (if a bit more painful), but do you want to use these where it counts if this is the state of quality control? I don't.

Also, here is a tip half removed from a dissected dart. The glue was easily broken and is applied only to the core, not under the dome. It seems to be the core length and barbs that hold it in place - and the fact that the glue is at least cured, unlike Koosh and many other poorly manufactured Chinese darts. 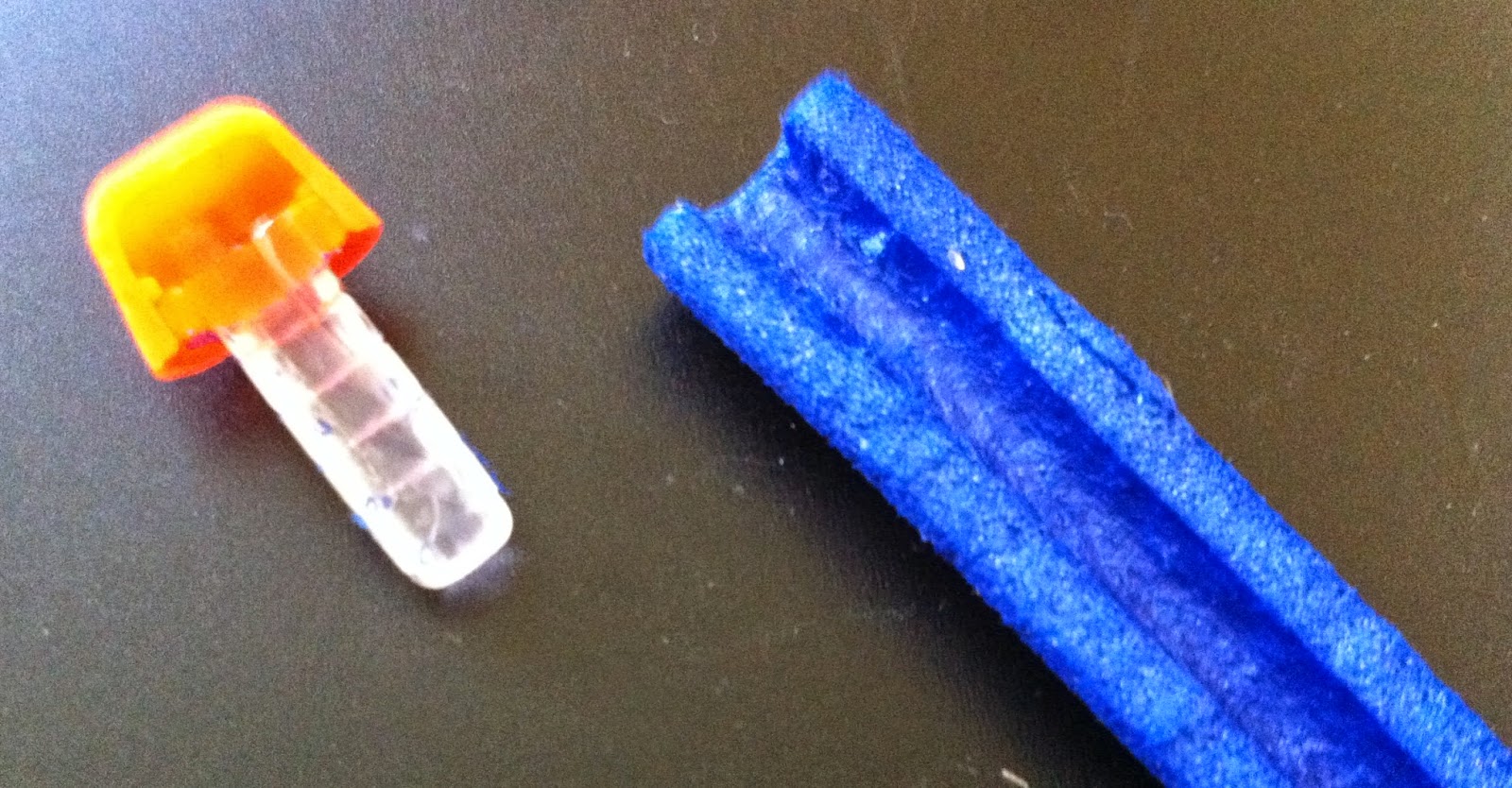 In the end, I have mixed feelings about these. The quality control and particularly accuracy problems, and the somewhat unhappy figures for velocity and flywheel snap response, mean I will not be buying more of these unless I discover something unknown when I take them to a game.

It is, however, nice to see:

If all you need is a cheap dart that will last, these are an excellent choice, perhaps for loaner, backup or rental ammo. However, these are not quite there when it comes to serious gameplay, and ultimately it's a bit a shame because they come very close.

Also, next I will be giving koosh darts a good honest shot (with reglued tips).
Posted by torukmakto4 at 3:00 PM