My latest (early May) Yutoys order arrived. Let me be honest here, it was a mixed bag. In the end, I am still satisfied, and I will get to why, but first, the problems.

To begin with, rather than the cardboard box usually used, I received darts in an envelope. The result was 13 smashed foams and a greater degree of bend and deformity on average. That isn't good.

On opening up my envelope of darts, I was disappointed to find that darts from Yutoys are now also coming with a huge amount of excess dried glue around the tips. Apparently now, in typical Yutoys lagging fashion, Yutoys has received the same latest stock that BW12 has been selling, which is notorious for this messy glue. Except on these darts, the problems are worse than ever and new ones have materialized. 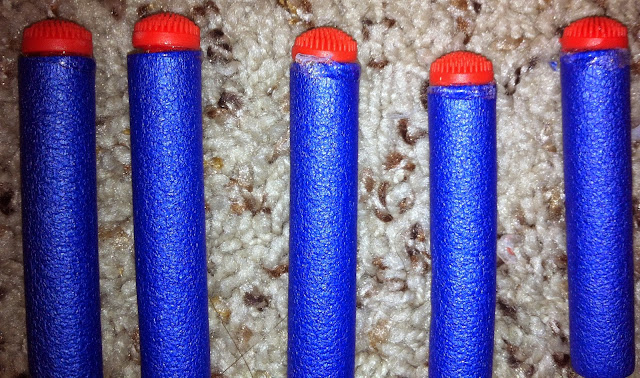 Note those two tips on the left. They are not seated on the foam. The three on the right have monumental amounts of glue sticking out. Completely unusable amounts of glue.

More unfortunate, is that the excess glue on these, with the poor tip seating leading to a thicker glue film, is very difficult to remove without removing the whole tip. Once you start pulling at the flash, the whole thing unzips and falls off. So, I had to disassemble and reglue the vast majority of this case of darts.

This is what I got after going through 4 clips of these. All removed tips on the bottom ready for bonding, usable darts on the top. These were the best 4 clips, too. 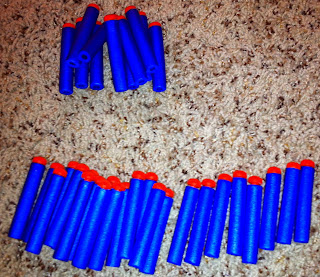 The other big change, which is almost entirely good news to me, is that the foam on these is much different from what I received in the past. It is larger bore, thicker wall, with a smaller center hole, higher density. Very similar to the foam on the original Voberry darts from the Amazon era. And that is probably the most awesome foam to ever come on a superstock dart. 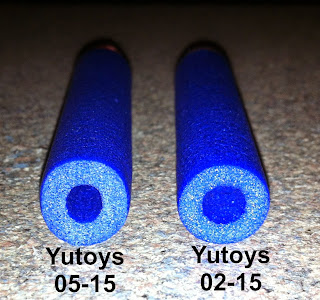 Barrel fits are tighter, of course, but it works with stock .50 cal barrels. I tried some in a Triad and the Hammer pump (which I am unfortunately selling, that gun had a real good run and I will miss her). The Tacmod of course did great with them.

Preliminary accuracy observations are solid. These seem to be beating out the old Yutoys blue that came with properly wiped glue.

The larger foam OD helps keep the tips away from the mags and inner barrels, and the smaller ID fits very tightly on the tips, so they have all been perfectly centered (which is never the case with the mid 2014 era koosh).

That tighter fit is probably why there are all these non-seated tips, though. It seems they just continued blindly into the new batch of foam without making any effort to calibrate the machines to make good darts out of it. Not to mention the glue wiping (or lack thereof) issue. Come on, UBS, I know you can do better than this. 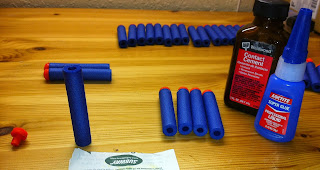 Well, after a long fatiguing session of gluing darts, I now have a case of something really, really nice. With this foam and the bulletproof RM-process tip bonding, the only thing that could possibly make these darts any closer to the ultimate form of the koosh dart would be the old school slick vinyl tips. So I'm not complaining. I wouldn't mind getting another case exactly like this one in the future.

What I have to worry about, though, is that the koosh dart is steadily losing its OOTB usability to these quality problems with the assembly. I heard Cooper mention something about koosh troubles in a recent video and I figure it must be related. Myself I really don't care if the koosh is basically a DIY dart kit, because if the foam is good and it is glued properly, it is still an amazing superstock dart - but the hobby as a whole needs accessible buy-and-shoot options and the koosh has been filling those shoes (however well or poorly) all this time, becoming part of the foundations of the superstock revolution.

The trouble posts are coming, and so might be the rise of the USC dart. Perhaps increased FVJ and Voberry usage, with a hint of Kforce...

Speaking of those, I will have the test shoot up for the Kforce probably tomorrow. And for these too, since they are in my book a whole new dart.
Posted by torukmakto4 at 6:35 PM