Tacmod 3.1 - All Downhill From Here

A while back I modded a RS stock for this to accept a battery. When I had it mostly together, I couldn't resist a mockup. Note the super tacticool Mega dart muzzle device.

The build stayed stalled while I was away from the workshop, and more importantly my heat gun, stash of PVC, paints, and battery welder.

Within the last few days I got back to those things, and it progressed very far, very suddenly.

XP180s installed in a Stryfe cage and receiver hacked. I finally just bought a Stryfe to get that cage. Was a much easier motor install and hopefully the spring feed guides work out too. 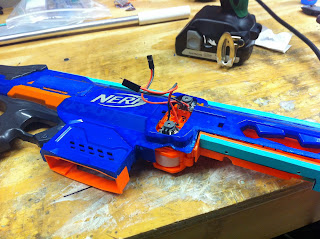 Did all the cage/magwell area fabrication and now it's starting to look like a Tacmod. Also, I filled in the recess from the old side rail with a PVC panel. It is now flush and will make a solid place to bolt on one end of a section of picatinny in the future. Finally, it now has a big-ass flash hider.

Closeup of bodywork prior to carving down the front of the magwell. 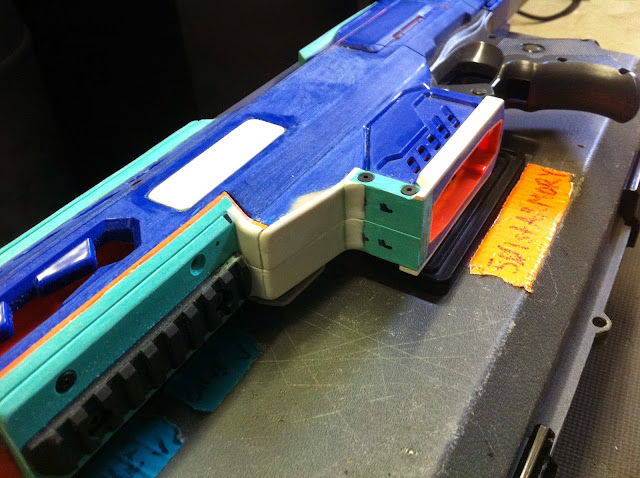 The side other players see. Endbell covers also done.

Came across this warning badge at Skycraft Surplus in Orlando. If you are a nerfer from Team Internet, you will know why I had to have this on my gun. It's about the size of the NERF logo that has suspiciously gone missing from the TM3.1's left side. I wonder why! 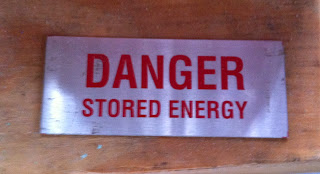 Parts ready for paint after sanding and washing with dish soap to remove oils. 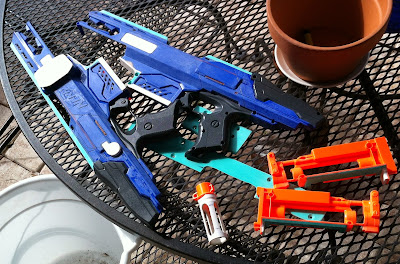 This is the jam door I modified to extend its stroke and added a charging handle, since other means of gripping it are now removed. 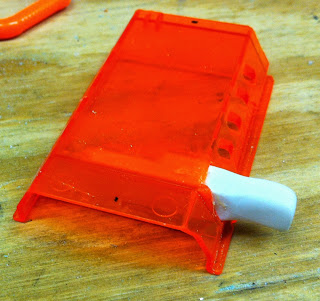 Receiver and top plate after spraying primer and the regular "DZ Customs Red" enamel. Currently waiting on these to cure so they can be whitestriped. 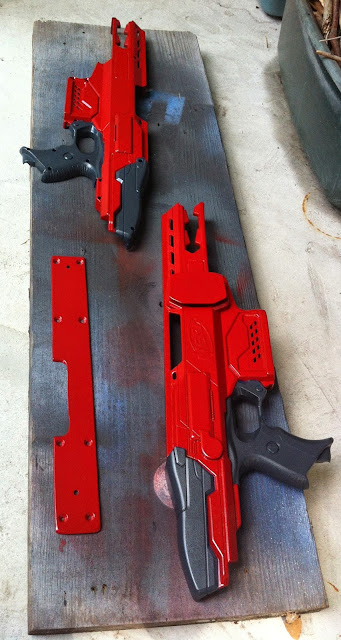 Built the battery. I didn't get any images of this pack build but it is just like the others I have done. 2S, Sony US18650VTC3. 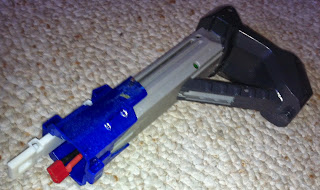 If all goes according to plan, this gun will be fielded at the June 6, 2015 TBNC HvZ woods game.