So I got back to Site B and commenced the initial tests of the slick-coated BoomCo darts.

First of all, the barrel stock:

Perfect for use with the BoomCo dart and a pneumatic engine. Slightly smaller bore than the .436 provided by 15/32x0.014 (thin wall brass and aluminum). You can just see the slightest daylight around the widest part of the dart which is where the body is roll-crimped onto the tip.

I picked up a 3 foot stick of it, which I did not modify - because I now plan to return it.


This is the test gun, a PVC "mini spudgun" with a 150cm^3 chamber and a 1/2" port piston valve. The valve performance is excellent, similar to a QEV. This thing is more than equal to any sane use of a 4B tank even at sub-50psi pressures.

I didn't bother with the pressure gauge yet. Or the chrono, because I was an idiot and left it at Site A. However, I varied the pressure and velocity quite a bit during the test. I never went beyond about 40psi (12 strokes of the hand pump that I used).

Here is a sample of what I shot. 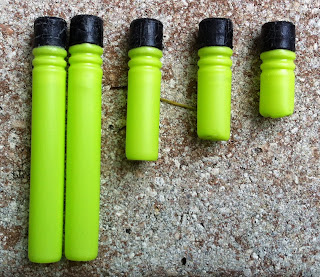 The shortened darts had the rolled-in end restored with a lighter.

Good news first: The coated tips work. There were no problems with the tips, darts sticking in the barrel, or consistency. As far as the internal ballistic aspect, everything was great.


Now for the bad. The main problem is that none of the darts were stable. The backstop I was shooting at was about 60 feet away (I never moved on to the longer ranges). Full length and shortened, they all acted up, and at any velocity. As soon as I got past "low-end-superstockish" (or, more practically, got up high enough to shoot flattish at this range), they began acting like elites and veering or describing a 2-4' wide spiral or erratic path, then hitting nowhere near where I was aiming. Tentatively, the shortened darts were the worst.

Perhaps that could be resolved with better barrel length tuning or porting, but experience tells me that projectiles requiring the like tend to be impractical and inferior to those that can tolerate some blast, like most .50 cal short darts.

Now this was the killer flaw: 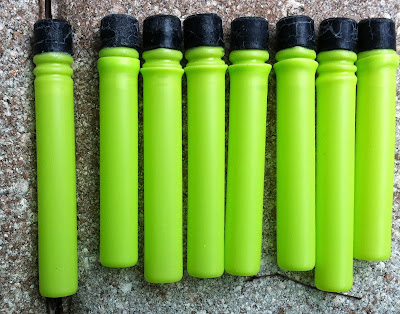 On impact, most of these full-length darts (all of the above are, or were, unmodified length; dart on left for comparison) collapsed as shown.

The plastic tube tends to continue by inertia. The area where it is rolled down into the cannelures of the tip core is a weak spot and it tends to fold over itself in this manner.

This expands the dart, making it no longer fit in the barrel it was fired from. 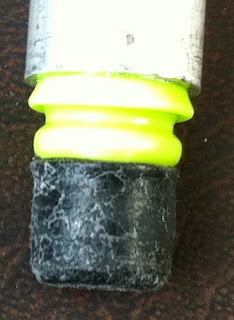 The deformation is reasonably permanent. Straightening the dart after this is difficult and getting it to fit as it did originally impossible. 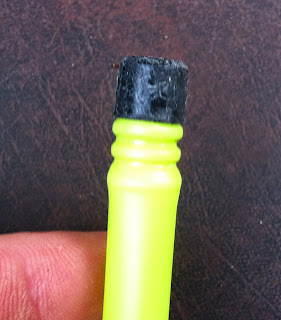 While most darts won't hit a wood fence like these, many do hit harder parts of gear and players as well as trees, walls and cover. And this was from 60 odd feet out, and while I don't have the chrono handy, most of these were not going over 300FPS. This is not acceptable for an expensive dart to fail in such an insidious manner, such that you might pick these up and have them not feed.

At least I hope my barrel stock and tip mod info can help someone. Perhaps if you are looking for something superstock, or other than a stefan-competitor, you may like BoomCo, but I am not too impressed and will not go ahead with this venture.
Posted by torukmakto4 at 1:58 PM