As I discussed in my Shelf Watch post recently, Buzzbee has recently reworked the Air Blasters Extreme series somewhat, to include the separate availability of these darts. 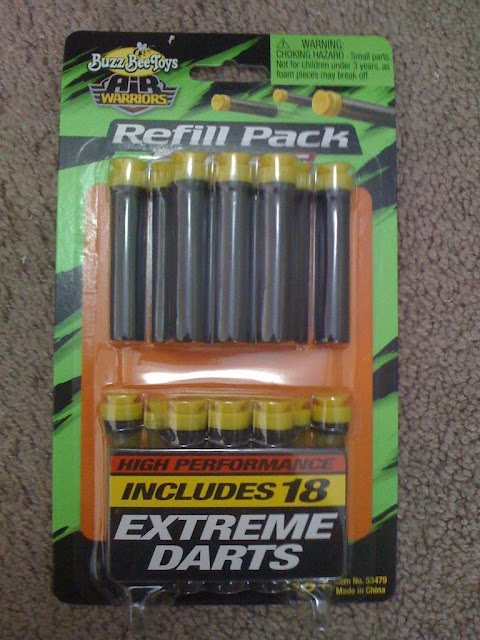 This 18-round card pack was found at a Wal-Mart in Florida for $4.88. No cases or other quantity packages were found.

Go ahead, keep reading after the jump, I know you are there thinking about it.

Back panel of the package, showing off the new "EXTREME" logo (Buzzbee's answer to NSE, I would think) and stating "Works ONLY with Air Warriors Extreme Dart Blasters!" As will be seen later, this is not necessarily true. Mostly. 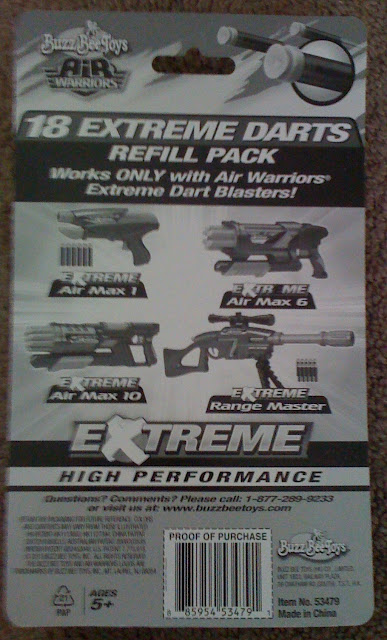 The dart. Typical Buzzbee tip; has an integral hard polymer weight (though I have not dissected one yet) but this is a very different design from the original Buzzbee tip. Foam dimensions are standard for Buzzbee darts.

These darts have what seems to be, by usual standards, an AMAZING foam. Density and rigidity exceed that of any dart foam I have ever seen in person, even the old W-code orange Nerf foam, by a significant margin! Seriously, this is high quality and robust material. Full marks there...


The incredibly high density of this foam is apparent in end view, thanks to that Convoy M1 flashlight which photobombs this image. Awesome light, BTW, highly recommended. I ought to review that. 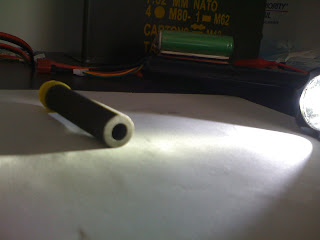 The suction cups on these tips are well designed and functional, unlike those of early BB darts that suffered from poor suitability of Buzzbee's tip compounds of the era and poor molding quality. Here is a dart (which I did not clean, moisten, or otherwise prepare) easily adhered to a painted steel ammo can used to transport batteries: 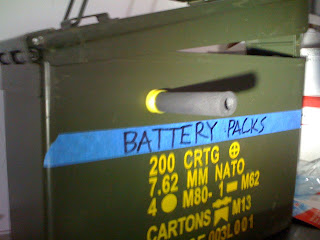 Now for the compatibility testing.

There is one thing I am missing, the mass of this dart. I have no laboratory balance or other type of accurate scale at the moment and I cannot weigh darts - but from what I can tell these are about the same mass as a Nerf micro dart.

Here is the data from the chrono session with all the guns listed below. 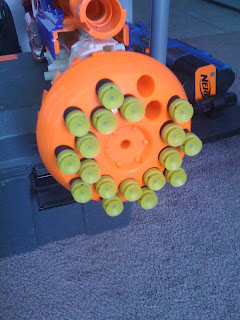 Swarmfire: Tight barrel fit. Full to 90% insertion into stock barrels, just like other Buzzbee dart types which fit this cylinder.

No unit with pegs were tested, I do not have any.

Test gun specs: This is the unit on my RapidSwarm and is equipped with an older spring pack that I have had in use since 2011, formerly in my old Swarmpistol. AR removed, flowed, de-pegged &c.

Overall result: Unfortunately, it didn't like 'em. As will be seen with the Strongarm, many revolvers have problems with sustained high chamber pressures (caused by excessive dynamic friction, excessive mass, or overtight barrel fits). The cylinder seal leaks, energy is wasted and consistency goes down. Unfortunately, the chrono caught this occurring with the Swarmfire, suggesting one of these problems exists. Velocity dropped and became variable, a warning sign when dealing with revolvers - especially one as incredibly consistent as the Swarmfire with its optimal ammo, Elite darts. Since the fit is not terribly tight and the mass is not anomalous, this is a good hint at the nature of the problem. 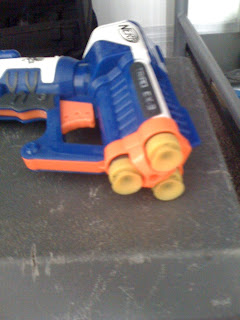 
No pegs were tested.

The Triad did a decent job of shooting these, but they gave it a bit of a hard time as well, with a decrease of velocity and consistency over Nerf sonic micros. Overall the darts are usable, and also quite accurate. 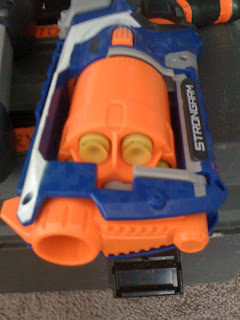 
Very low and very inconsistent velocity resulted. No usable data could be obtained. Darts practically flopped out of the barrel at less than 30 fps on occasion.

These darts are not usable with Strongarms.

Rebarreled SSPB (Secretstrike): This has a stock OPV and a 2.5" Genova CPVC barrel and was pumped to the OPV setpoint for each shot. Velocity was substantially boosted over sonic darts by nearly 10 fps. Why is unclear.


Based on the test results, I cannot recommend these darts as a substitute for Nerf micros or any other dart in common use.

The foam of these darts is not polyethylene - it is likely EVA, and as a result, the darts cause excessive friction on the bore during firing when combined with the tight-fitting barrel designs of most nerf guns. Buzzbee does use a much different (and much more inefficient) barrel design, both historically and on the current ABX lineup which does not have a tight interference fit on the foam - so this is likely not a problem, and the added strength of the EVA foam is beneficial to prevent darts from bursting.

As a further note, flywheel performance in Barricades and the like may be erratic, as with earlier types of darts from this company, because the tip has a rigid plastic weight inside and is rather noncompliant resulting in being forced through the flywheels at an angle and/or causing a large loss of motor speed per shot.

09/13/13 Edit: Having dissected one of the darts, I can confirm that the tip has a molded plastic insert, not cast epoxy. Furthermore I am almost positive that the foam is composed of EVA, which is what "craft foam" is! Tight barrel fit is simply not the problem here.
Posted by torukmakto4 at 12:13 PM