Just roughed in this primary. 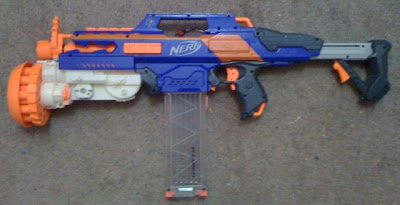 This is the RS development mule, its life as the lab rat for electrical upgrades over and its tour of HvZ duty about to begin. 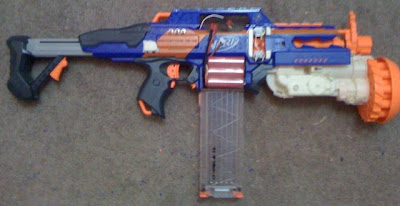 This is NOT a slap-it-on affair. When I get a shot of the internals on this build, you will see how I CRAMMED the Swarmfire in as tightly as possible with absolutely zero exceptions for anything! Keeping this integration high and tight to the rifle was a major priority, being that a poor underslung installation can totally destroy the ergonomics and balance of the whole gun. In the past, this was also a major difference in my Swarmpede builds versus many others that had the Swarmfire hung at least 1/2" lower and 1/2" farther forward (that is, if they were not flipped upside down, shelled and other nonsense) - but this makes those old pedes look sloppy.

Look at it this way, I shaved down webs and the burrs left by flush-cutting excess plastic off in order to gain that fraction more. 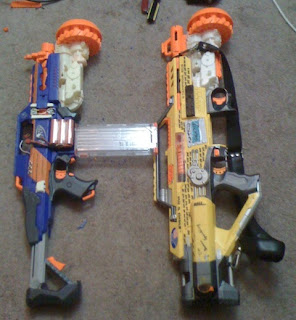 Compared to the Swarmpede, which is several generations old but still has never had an equal as a well-rounded and effective HvZ rifle.

Until now! Time to wire that Swarmy up!
Posted by torukmakto4 at 7:13 PM