Welcome to the second episode of Shelf Watch, now a regular blog series!

First up we have an electric soaker from Buzzbee. 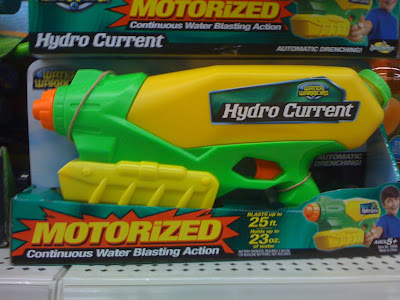 If you can't beat 'em, join 'em! Back in 2010 Buzzbee was slammed with a lawsuit over use of some Hasbro IP related to soakers - specifically CPS.

The unfortunate aspect of this situation is that when the bigger of the two titans decided to use the ban hammer on the other, the loser is not just Buzzbee, it's us. Why? Because Hasbro has effectively been sitting on the CPS patent (i.e. rubber bladders as a constant-pressure storage vessel for air or water for soaker and dart applications) for years. None of Hasbro's soakers have been CPS in recent memory except the Hydro Cannon.

Instead, Hasbro populates its soaker line with what are effectively syringe-type devices, airgun designs modified for water with spring-loaded chambers (Shot Blast), and of course the familiar electric soakers which use an onboard pump to continuously supply pressurized water to the nozzle - all of which are poorly received technologies by serious fans.

While the motive for lashing out against Buzzbee is not clear (is there intent to ever use CPS again in a Hasbro product, or is it more about quashing a superior competitor's product line to compensate for one's own faults?), the fact that the CPS technology is being held hostage in the name of profits is the true issue here. Furthermore Buzzbee seems to have been stifled as an effective industry player in BOTH soakers and foam guns by the fallout of this mess.

So it's kind of ironic to see an electric soaker out of BB. It may be the one approach to designing a soaker that really is immune to Hasbro's legal abuse of power in every sense, since electric soakers have been around for ages (anyone remember Entertech and their realistically colored milsim line of "soaker AEGs"?)


Up next: I was wrong, when I wondered if the Z-Tek Bow is the same product as the notorious Z-Curve. Answer: It's not. Here's the real deal. Z-Tek is a new product, and judging by that range claim, an inferior one. 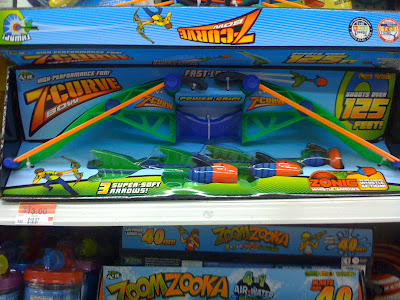 And it looks like Zing is expanding operations. This is push/pull, blatantly-toy, nonsense to us - but it's unique in that it comes set up to fire several types of foam projectiles including darts - AND water. How 1990s Nerf style this is. 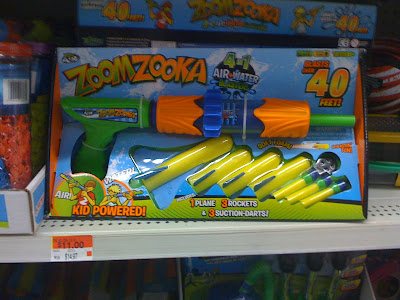 Buzzbee color schemes are a dime a dozen and not worth mentioning - but this one is notable: recolored over/under Buzzbee DS in a scheme that has echoes of N-Strike Elite. Careful, Buzzbee, don't poke the huge and very hungry grizzly bear that is Hasbro. Restyle of the "Tek" branding. The venerable Tek 6 soldiers on in its second and third-generation forms, whereas the other pistols that showed up from 2010 to present (Rogue, RADS-12) seem to have vanished from a lot of distributors. Buzzbee production is incredibly nonsensical and unpredictable. It seems that whenever there is a demand for guns (pistols, primarily), the monkeys at the factory mount up a random set of molds and run off a batch of anything from 2001 to present design. You never know what will come back from the dead. Furthermore, everyone carries a different set of products from this company, and none of those perfectly matches what is on Buzzbee's website. 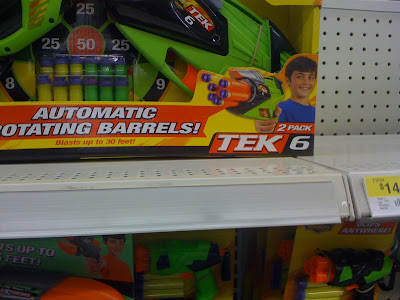 Buzzbee ammo offerings. The "Air Blasters Extreme" line (ABX, from here on) has been recently revamped aesthetically with a new unified "serious" (relative to BB's other toy-like colors) dark grey scheme and filled out with 2 new Airtech-style revolving airguns, and along with that enhanced presence of prominently branded "EXTREME" products comes the first real marketing of the Extreme dart.

These previously came with the Rangemaster, but were the same foam and tip colors as traditional Buzzbee darts (now referred to as "Foam Darts" versus "Extreme Darts") and were not available outside of being the handful of darts bundled with an ABX gun. NIC members did notice the existence of these darts, but there was not a peep from marketing about them, nor were users instructed not to use "Foam Darts" in their ABX guns. I surmise there were complaints about the terrible stock barrel design of the Panther and Rangemaster causing typical dart foam found on the "Foam Dart" and various competitors' darts to burst, hence why we now have a different color scheme and ready availability of these "Extreme darts". They have an INCREDIBLY dense foam that is VERY rigid. While that as a solution to the crappy barrel design is facepalm-worthy, it's only a good thing for us!

I bought some of these at the low price of $4.88 for 18 rounds (compare to Nerf Elite standards, at similar prices per 10 rounds IIRC). I will be reviewing them later, to include compatibility with Nerf products and mods, chrono data and several reference fitment tests and compatibility checks - but rest assured, they are one hell of a product. Consider me impressed, I didn't expect Buzzbee to be capable of such quality of materials and assembly as found in these, let alone the fact that this foam makes old W-Code look wimpy. 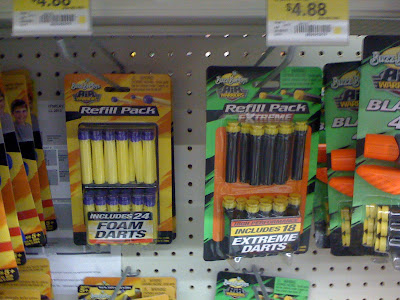 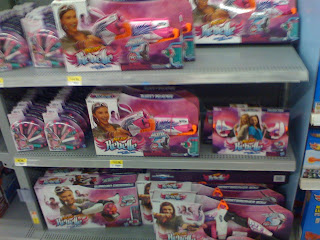